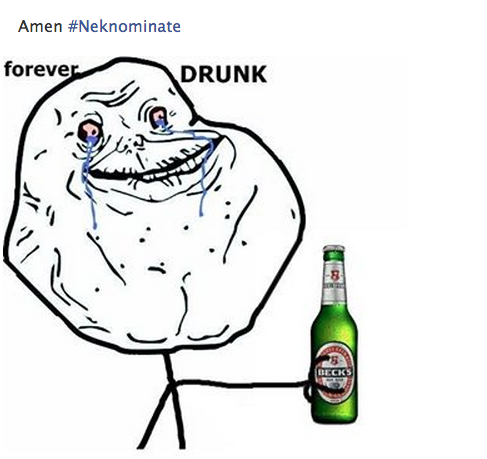 Good grief, sometimes the Internet can be such a dastardly twisted place.

From the evil bowels of online bullying and government surveillance, to wormholes of mind-rotting garbage (13 cellulite-riddled celebrity rumps!) it's a wonder we all log on and make it out alive people.

In the latest craze to hit the Interwebs, Neknomination – an online binge-drinking, "I-dare-ya" game – is sweeping the digital land. Here's how it works. (Although there have been countless permutations since it's rumored to have first emerged in England in 2008 as Neck [chug] and Nominate.)

The "neknominee" films themselves quaffing a pink of alcohol – the more potent the better – uploads the footage to the web and then nominates two other friends to do the same within the next 24 hours.

Of course, as humans we're driven by some inexplicable perversity to one-up each other ad nauseam in every field imaginable; what was once a "pint of alcohol" has since become a revolting blur of every concoction and public humiliation imaginable. Dead mice, slurried chicken kebabs, public nudity and of course, copious amounts of post-dare vomiting have all become par for the course.

And as of yesterday afternoon, Neknomination has claimed the lives of four men – two English and two Irish. Stephen Brooks of Cardiff, England, 29, collapsed after being filmed knocking back a pint (of what appears) to be vodka; the autopsy results haven't been revealed yet, but police seem confident that alcohol poisoning will be the culprit. Isaac Richardson, 20, of Woolwich in South London, also died this past weekend following the consumption of a shocking amount of alcohol: an entire bottle of white wine, a quarter bottle of whisky, a small bottle of vodka and a can of lager.

Richardson has been quoted saying: “I want to outdo people; I want to do something that nobody has ever done."

Despite backlash from grief-stricken families and general disgust surrounding the whole damn thing, nominations continue to be uploaded.

This makes us wonder about the glittering promise of over-night internet fame; with some YouTube stars making six-figure salaries (including many that are booze-fueled) under partner contracts, guzzling low-grade hooch in your underpants might seem like a stellar way to garner some attention ... and maybe even a livelihood!

While the perils of Internet fame are myriad and messy – with some unlikely stars even becoming suicidal – there is a silver lining in this sh*t storm. South Africans have reappropriated the whole thing and are using Neknomination as a means of paying good deeds forward.

Talk about turning poo into pie.