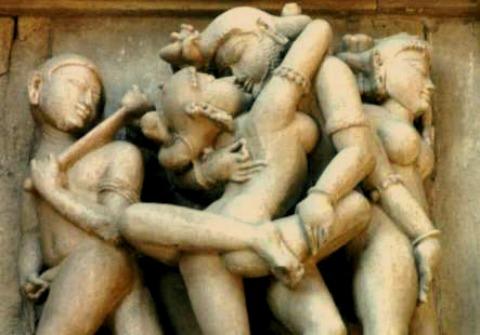 When you take a look back at humanity — from cave days to today's blissful blur of tech obsession — you owe your existence to one thing: f*cking. And the fact that it feels amazing.

But it feels so dang good for a reason. In the past, promiscuity and competition were essential to our survival as a species. Salon recently posted an excerpt from David A. Rosenbaum’s book It’s a Jungle in There: How Competition and Cooperation in the Brain Shape the Mind, discussing Charles Darwin’s (you remember him, right? Shoulda paid more attention in biology!) theory of natural selection. Awesomely, they stuck to the best part – sex. Not finch sex (ew) — but dirty, hot, people sex.

Competition makes sense — ya gotta beat out the other weaker, stupider, smellier, slower losers to snag someone to help pass down your genes!

But how is promiscuity relevant Giana?

See, when you decide to have a baby with someone, you’re seriously just tossing the genetic dice out there. And unless you're planning some Gattica, sci-fi sh*t, you can get stuck with some odd things. There are some gnarly genetic diseases out there — and you may not know you’re a carrier. Tay-Sachs, for example, is particularly bad. It’s caused by a missing enzyme (hexosaminidase A, for ya sciencey sistahs). Because of this absence, the nervous system and the brain progressively deteriorate until death. Oh, and it's untreatable. Babies diagnosed with it don't live past the age of 5.

From an evolutionary perspective, you can’t spread your seed if your offspring don’t live long enough to get their own freak on.  So, what do you do? Bang lots of people! Okay, that’s an over simplification — but genetic diversity is important in survival of species. If you have a baby with a dude who (sadly) passes on a genetic disease, you need to find another bangable beau to help you make a baby who will survive.

Accordingly, sex, in Darwin’s theory, has the statistical consequence of quickening chance effects. Were there no sex (or were there sex with only oneself the opportunity for genetic diversity would be low. Sex or, more specifically, competition for mating provides a forum to show off features that, as far as the participants can tell, bode well for survival. — David Rosenbaum

Today, we face overpopulation. So there's really no need to procreate like crazy especially since we’re also flipping out about resource scarcity, but that’s another topic entirely.

The good news, however, is that birth control exists. And efforts are being made to make it more accessible than ever. And while some argue that accessible birth control leads to promiscuity — studies show that this isn’t true. And even if it were true — would it matter? Evolutionarily speaking, genetic diversity has gotten us to where we are. Embrace your freak flag and let it fly (SAFELY) — the power of Darwin compels you.

Image: think they had the right idea. Courtesy of Wikimedia