Love Him Or Hate Him, Meet The Hippest Occultist Of All Time 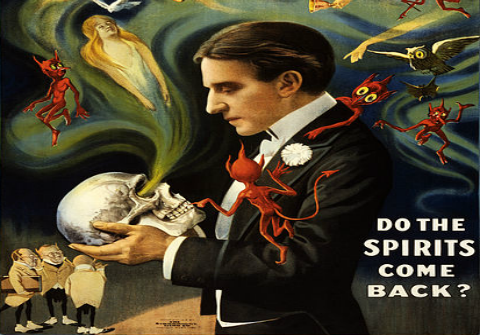 The most influential figure in 20th-century counter-culture that you’ve probably never heard of? Aleister Crowley. He called himself “the Great Beast 666,” and the British press concurred, dubbing him “The Wickedest Man in the World” for his debauchery. This Cambridge-educated occultist is the focus of a documentary in a series on sinister historical figures called “Masters of Darkness,” and a glimpse at his biography reveals why he’s considered an interesting subject.

The red-hot fusion of disparate religious traditions and "magic" was very in vogue from the early to mid 1900s, and Crowley was at the forefront. He subverted his conservative British background by engaging in extreme practices, from risky mountaineering and “sex magick” to visions of dark goddesses, demons and—of course!—heavy drug use.

He emphasized individuality and creativity, and his axiom for appropriate social behavior: "Do What Thou Wilt."  ("Eat, drink, and be merry" was already taken.) He was perceived both as a charismatic and brilliant social critic, as well as overbearing, spoiled, misogynistic, and racist. Most of his occult writing is considered incomprehensible, and like many eclectic figures, he had some serious money management issues—squandering his substantial inheritance and frequently being penniless.

Even so, often with the help of benefactors he traveled far and wide, wrote and painted, engaged in numerous affairs, and diligently led devotees in the ways of his strange religion. He’s even rumored to have worked as a British spy against Germany during WWI. And he had a knack for rubbing elbows with aristocratic elites, artists and celebrities.

Some Christians view him as a horrifying enemy of the faith; some New Agers as a revered mystic; some counterculture types as a hip reference; and neo-pagan practitioners see him as an integral leader. He strikes me as a creepy manipulator. Whatever he is, Crowley is an interesting figure.

As a 1915 Vanity Fair profile put it: “a legend has been built up around his name. He is a myth. No other man has so many strange tales told of him.”

We should be so lucky.

If you like this article, please share it! Your clicks keep us alive!
Tags
high on history
occult
magic
Aleister Crowley
L. Ron Hubbard
Music