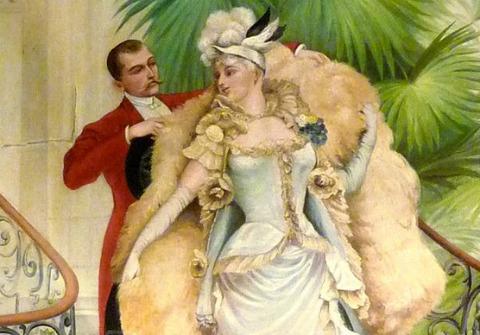 Dirty words are one of life's sweetest pleasures. No matter how old we get, the delicious release of a "forbidden" word helps—at least temporarily—to feed the insatiably devious side in all of us.

Interestingly, your granny likely used the same words you shout when you stub your toe to psych out her fellow bridge players. Seriously, filthy words go back much further than you think. This inspired us to get cozy with the Oxford English Dictionary to explore the etymology of some of our favorite naughty words.

The queen of vulgarity. The worst of the worst. It even has its own acronym (sorta): see you next Tuesday. Surely it was born from an equally vulgar word, right? Nope. C*nt comes from the word "quaint," originally spelled more like "quentye." As in, "what a quaint little cottage!" Apparently, quaint originally referred to ladybits. Keep that in mind next time you're sizing up a little cottage.

How they used c*nt in 1380: "and pryuely he caughte hire by the quentye," Geoffrey Chaucer, The Canterbury Tales: The Miller's Tale. Translation: the Miller was playing down south. (Pretty juicy for early literature.)

Realistically, this is one of the most versatile words in the English language. If I said, "f*ck those f*cking f*ckers," you would know I'm angry at a target audience and I don't wish them well. Can't say that about "cat," that's for sure. It's believed that f*ck came from the Dutch verb, "fokken" which also has a variety of meanings: to mock, strike, fool and to have sex with.

How they used f*ck in 1663: "I did creep in . . . and there I did see putting the great f*ck upon my weef," Richard Head, Hic Et Ubique. Translation: the narrator walked in on someone doing his wife. (Now, that's awkward.)

"Tit" was a sound made to call a cat—not too different from those clicky noises we use to call Kitty today—but it also sounded similar to another word for breast: teat. Because we love cats too much, "tit" had to get a cutesy "-y" makeover. Girls who were sweet were called "titty." Weird, right? In the early 1900's (about 100 years after the quote below), "tit" appeared in slang as a shorthand for "teat." After this, it's speculated that the words "titty" and "tit" were used interchangeably—eventually, ta-tas won and "titty" was relegated to breasts only. And we're guessing that a certain sex move gave "titty" its dirty word clout.

How they used titty in 1828: “Titty-pussy; a cat,” William Carr, The Dialect of Craven.

We all know this is "pussycat" shorthand, but when did its meaning change? Once again, it was common to associate nice women with the word "p*ssy." Arrested Development fans may remember that episode where Michael got offended by a well-meaning Brit chick (i.e. Charlize Theron) who repeatedly called him "p*ssy," instead of sweetheart. Same thing. Somewhere along the lines, it became another way to say "vagina."

How they used p*ssy in 1865: “My poor p*ssy , rent and sore / Dreaded yet longed for one f*ck more.” – Philocomus, The Love Feast. No translation necessary on this one.

You probably know that a female dog is also called a b*tch, right? In Old English, it was spelled "bicce." The spelling has been changed a bit, but calling women b*tches isn't new—apparently it's okay for women to be cats, but not dogs? Where's the logic, people?

Image: and you thought they were polite back then. Courtesy of Wikimedia

If you like this article, please share it! Your clicks keep us alive!
Tags
listful thinking
dirty words
Sex
titty
inappropriate
NSFW
high on history