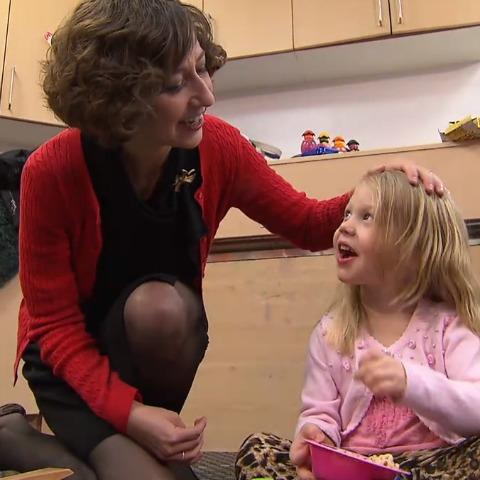 Behold, the wonderful mockery of a batty woman.

The Princeton mom, Susan Patton, has been creating quite a ruckus with her backwards notions of relationships and womanly life goals. She's made a name for herself by preaching that ladies need to hold on on sex until marriage, which should be done sooner rather than later to avoid the horrific possibility of becoming a mother in your 30s. Gasp! Patton's various rants make men into chauvinistic pigs and women into glorified baby machines. So, yeah. Pretty much everyone is offended by her.

As per usual, The Daily Show sought to mock the holy hell out of the ridiculousness spewing from Patton's toxic mouth. Correspondent Kristen Schaal has wizened up—she knows that telling college women to start looking for a hubby is much too late. The solution is so obviously brilliant we're ashamed that Schaal thought of it first: kindergarten dating.

And of course we're stoked to see Schaal parody Patton's wacko ideas, but—you know what they say—no publicity is bad publicity. Everyone unfamiliar with Patton will now look her up. And there's a part of us that just wants these reactionary voices to die away. The more attention we give Patton, the more her '80s puff-head will swell.

Then again, it's just too damn funny to pass up. Enjoy, ladies. Happy Friday.