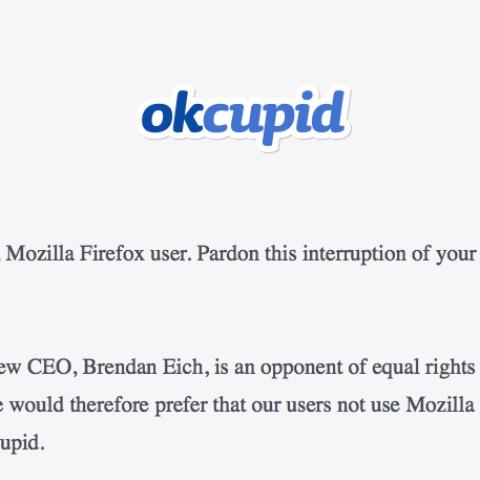 We're thrilled to report that it's becoming increasingly uncool to support anti-gay rhetoric. Um, yay society! With online dating rates rising as well, the love scene for LGBTQ folks has expanded a bit, too. Gone are the days of hiding and ambiguous poetry writing.

So, today we're acknowledging both of these steps forward by raising our glasses to OKCupid for standing up to anti-gay bully Brendan Eich, the CEO of Mozilla (of Firefox internet browsing fame). Eich is the new CEO—so don't hate yourself for using Firefox in the past—but his $1,000 contribution to California's Prop 8 campaign—which, in case you forgot, was designed to prevent gay couples from marrying—is difficult to forget. Half of Mozilla's board also stepped down in protest. Okay, so the board is made up of like six people, but that was still a pretty symbolic gesture.

In response to Eich's actions, OKCupid asks that users do not use Firefox when accessing their site. If you use Firefox to get to the site, you will be greeted with a message asking OKCupid users to consider using a different web browser. In the message, OKCupid claims that their business is to help people find love. Mozilla's decision to promote Eich, they believe, hinders progression. Or, as they put it: "OkCupid is for creating love. Those who seek to deny love and instead enforce misery, shame, and frustration are our enemies, and we wish them nothing but failure."

Mozilla has since commented. They claim to support LGBTQ equality, though they admit their company is: "made up of people who have very diverse personal beliefs working on a common cause, which is a free and open internet."

We salute OKCupid for bringing this to our attention. The dating site still allows Firefox users to access their accounts after they read the message, so it's not a full-on boycott—but it is something. Eich was asked to step down from his position, but he refused, instead delivering a lame apology that reeked of corporate-speak and did little to heal wounds.

Image: We hear ya. Courtesy of, OKCupid