Mindy Kaling on Being "Normal-Slash-Chubby" in Hollywood 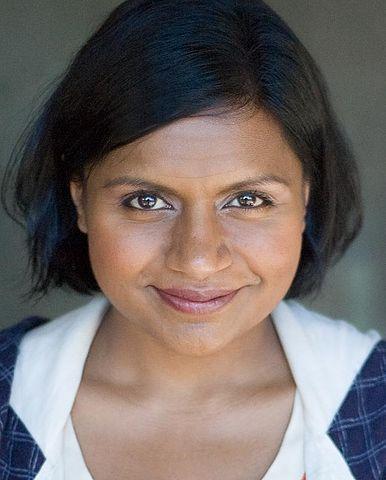 Mindy Kaling—actress, show writer and author extraordinaire—is funnier, smarter and more hard working than most. But in one way, at least, she is strikingly, shockingly normal: her weight.

Indeed, Kaling falls outside the two categories laid out for her as a woman in Hollywood. Behind door one: be conventionally thin, like the vast majority of celebs. Behind door two: defy skinny culture altogether and, like Melissa McCarthy or Adele, be held up as a role model for sassily shunning weight expectations. Left out of these options is the one Kaling has chosen: be average.

On Jimmy Kimmel, Kaling brought this issue into sharp focus with her trademark wit, saying:

I am the recipient of a lot of backhanded compliments. [People will] say, 'It's so nice that Mindy Kaling doesn't feel she needs to subscribe to the ideals of beauty.' And I'm like, 'I do subscribe!'...The way they talk about it, it's like she's a pioneer because she's glued to her sofa. By the way, I run and work out. It takes a lot of effort to be a normal-slash-chubby woman.

What makes these words particularly resonant is the fact that most ladies are "normal-slash-chubby" (depending on how you define "chubby"). By many accounts, the average woman wears a size 14, which falls right between the mark of thin and plus-sized. And like Kaling, most of these normal gals run, work out and otherwise subscribe to those all-consuming ideals of beauty.

It's frustrating, then, that the rigid weight distinctions imposed by Hollywood make anybody who falls outside the skinny category get relegated to the status of, for lack of a better phrase, "fat role model"—women we assume have bravely said "f it" to being thin, and who spend their days defiantly eating Bon Bons with a middle finger raised.

Obviously, this is a completely ridiculous notion. How many females—thin, normal or heavy—do you know who honestly don't give a shit about their weight? How many don't try to some degree to eat better or make it to the gym or try some insane crash diet so they can shed those maddening extra pounds?

The fact is, the most "normal" part of a woman's relationship with her body is that it entails struggle. Yes, some manage to maintain a thin figure with minimal effort. And yes, some are legitimately overweight or obese and just don't give a damn. But most aren't skinny, fat, weight-obsessed, lazy, an ideal or a role model. They're just, well, normal.

And in Hollywood, apparently, that's an extraordinary thing to be.