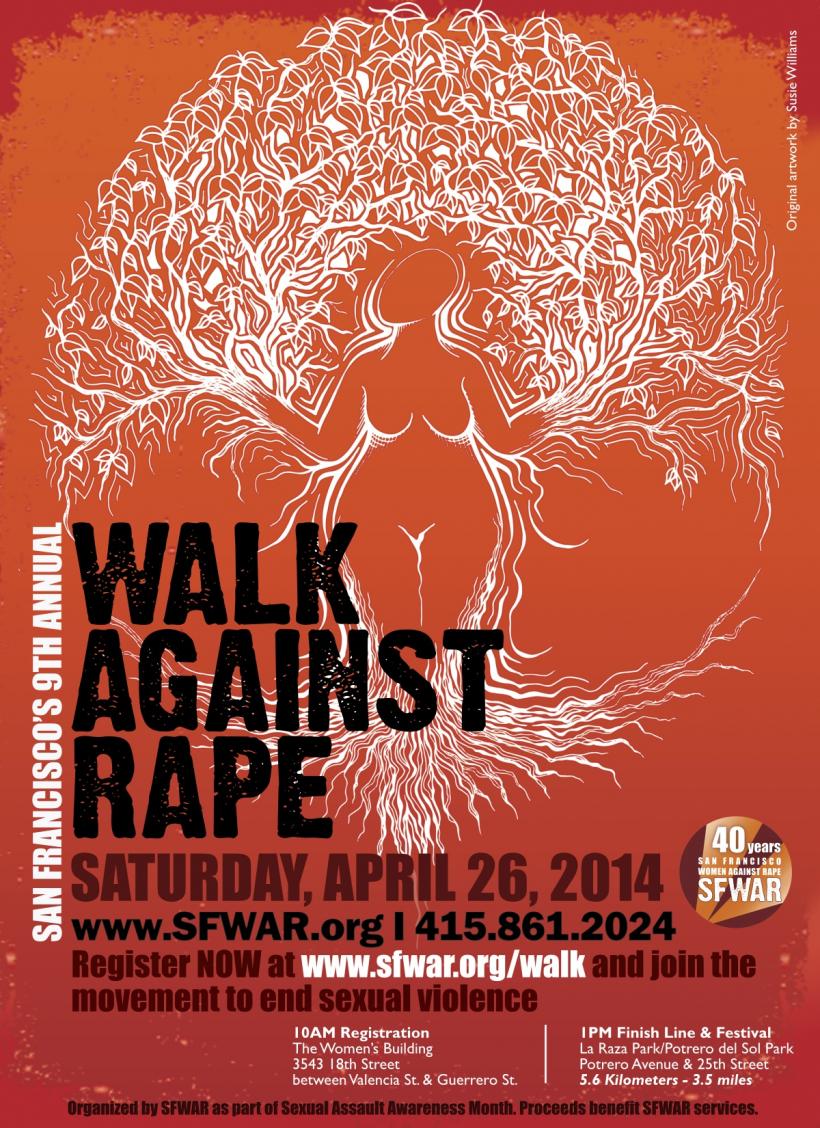 Sexual violence makes up some of the worst five syllables you can utter—or endure—in the English language. According to RAINN, every 2 minutes an American is sexually assaulted, 60% of assaults are never reported to the police, and perhaps most shocking of all, 97% of rapists will never see jail time. Rape is all-too-often shrouded in shame and silence; it takes organizations like SFWAR (San Francisco Women Against Rape) to foster dialogue, education, and change.

SFWAR provides free counseling, medical and legal accompaniment, as well as prevention education trainings to youth, service providers and adults throughout the City and County of San Francisco.

We caught up with Sandra Sandoval, Head of Community Initiatives, to discuss the non-profit's 40-year evolution and their 9th Annual Walk Against Rape—which goes down tomorrow! Participants will kick off the 3.5-mile walk beginning at The Women's Building at 10 AM in the Mission and wend their way to a festival at Potrero del Sol Park; there will be performances, speakers, and of course a host of delectable vendors in typical SF-style.

So how did you get initially get involved in SFWAR?
I have been doing violence prevention work in San Francisco for over 18 years—I very much believe in SFWAR’s premise that in order to end sexual assault we need to end all forms of violence. Thus my past work definitely saw a lack in adequate education on sexual violence in our communities.  It is the Community Initiative’s goal through our prevention education program, to begin to train and educate as many community members, leaders, youth and families on sexual assault. I got involved with SFWAR in May of 2011 when I got hired in my current position.

Often times, women remain silent after enduring rape and sexual assault. How does SFWAR help combat women's fear to talk about it or even 'walk' about it?
Survivors also stay silent because of the victim blaming (at times) perpetuated by society, family and /or community members. SFWAR is a survivor-based organization.  We believe in the survivor’s choice of what healing means to them and we support this premise by allowing survivors to make their own decisions on how this will look like for them. This approach empowers the survivor to gain back some of their personal power and control that was taken away from them because of a sexual assault.

SFWAR puts on a WALK Against Rape every year April 26, 2014.  It is important for community members to come out and support because it also sends a message to survivors that they are not alone, and it changes rape culture by letting the community know that it is not and will not be tolerated by its members.

SFWAR was founded in 1973 in a "basement" by four women and a crisis line—you've come a long way! What are some of the most exciting things you've accomplished recently or currently have on your horizon?
SFWAR recently celebrated its 40th anniversary.  SFWAR had been able to develop its anti-oppression model to bring more resources to the following communities:

SFWAR’s started in 1973 in a basement part-time and has grown to a 24 hour crisis line ran by over 100 Certified Rape Crisis Counselors. By being able to train our Certified Rape Crisis Counselors on anti-oppression theory and practices, we are able to better serve the above communities on our hotline. SFWAR has also been able to work with Mujeres Unidas y Activias (MUA) to start the all-Spanish crisis hotline: the ALMA crisis line serving monolingual Spanish language survivors of sexual violence.

Why do you believe this Walk can make a difference in people's lives?
It is very important that the community begin to openly talk about sexual assault in our communities—this creates community accountability.  When the community takes a stand against sexual assault, survivors feel safe to be in spaces where they can not only heal, but join the movement to end sexual violence.

Many in our communities are unaware of the facts:

1 in 3 young girls are sexually assaulted under 18,

1 in 6 young boys are sexually assaulted under 18

1 in 4 women are sexually assaulted over 18

Internationally, 1 in 3 women are sexually assaulted.

Consciously or not these statistics prove that almost everyone knows a survivor of sexual assault, or may become affected by it. The WALK Against Rape is one of many community examples of spaces of support that is empowering for survivors and their families.  We hope you will join us on this day!