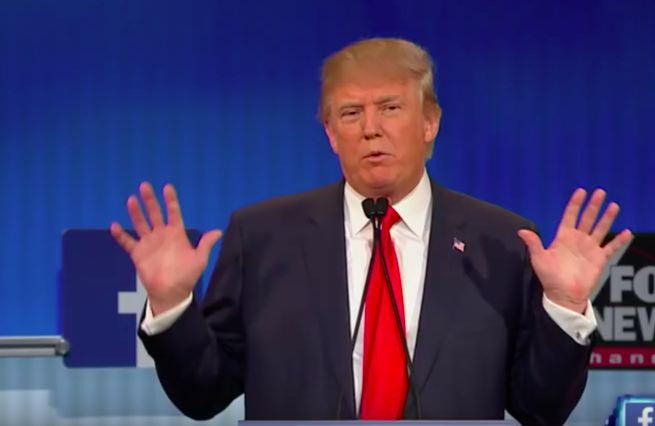 Donald Trump is sexist. Of course, that’s clear. There’s no tormented path of dog whistles to navigate. The man blamed a woman’s period for her debate question that he found difficult to answer. He’s a reliable fat-shamer. He’s judged women — both literally (Miss America pageant, anyone?) and figuratively — based solely on their physical appearance. He boasted of his all-clear status to manhandle a woman’s vagina based on his celeb cred.

Nothing about his sexism is complicated. Right?

According to election results, wrong. As a dear friend of mine recently reminded me, a majority of white women voted for Trump (I am resisting, with writerly discipline that I can describe here as nearly miraculous, the all-caps screed key).

Do I think those women are fine with sexism? No, not all of them. Do I think they believe Trump is sexist?

No. Not all of them.

And here’s why: the parade of female Trump media mouthpieces were so excited, so very pumped up, to remind viewers that he hired women. He hired women, y’all! Nobody who was really, true blue sexist would put women in charge.

Especially not back in the ‘80s.

What is both true and aggravating about this claim is how it demonstrates different iterations of sexism, and how simple-minded many of us appear to have become, or at least are comfortable pretending to be.

The true part: previous eras were more sexist in hiring women. They just were. Think about Mad Men, and then traverse across the timeline into the ‘80s, and discover the disorienting fact that the journey is not a long one. The feminist movement of the ‘60s and ‘70s was still very young during the Reagan years, and not yet widely accepted.

And there’s a 30-something Donald J. Trump putting women in senior positions at his nascent real estate behemoth.

How could he be a sexist? How could he? This was a rhetorical question to the lady Trump lackeys, and millions of (white) women shook their heads and ballots in agreement.

Does Trump deserve credit for putting women in senior-level office suites when most of the men in his industry did not?

If he were a different sort of man, the answer would be an easy yes. Clearly, Trump recognized that women were equally capable as men, and that certain women were, in fact, preferable to their male counterparts. That qualifies as progressive for the time period.

Yet, it is precisely this that makes the rest of Trump’s behavior towards women all the more damning.

Because here is a man who surely knew better.

I’m not excusing the men who “don’t.” I am pointing out that a man who wouldn’t dream of hiring a woman in his worst nightmare, and who then goes out and treats the opposite sex like so much hand candy, is demonstrating consistency.

In no way, at no time, are women full and equal people to him.

But based on the incongruence of his past actions, for Trump, women are complete and equal people when they can make him money. He’ll throw a hefty salary and penthouse office their way, provided they rake in the big bucks.

What makes parsing this out even more “complicated” is the fact of Trump being an equal-opportunity jerk. It’s not as if inconvenient or rival men who wander into his purview are treated much better.

I do not know, and probably no one does, the definitive number of times he called Ted Cruz a liar.

I’ve got no love in my heart for him, but Chris Christie bore some brutal public humiliation at the hands of his endorsed POTUS candidate.

Trump ridiculed John Kasich for the way he ate, Rand Paul for needing hearing aids, and Jeb Bush pretty much for having a material, bodily existence at all.

He ripped Arnold Schwarzenegger for ruining ratings on The Apprentice. He basically accused Bill Clinton of rape.

There are no “safe spaces” in Trumpland.

This too became an underlying argument — an implied proof — that Trump was not sexist. He was just an oaf.

This is weak tea, my friends. It’s true, but also it is much more not true.

Trump was a jerk to a lot of people, including men? Yep.

This isn’t hard to grasp — most sexists are jerk-y people in general.

But voters in the primary and general election played the ignoramus card, and here we are. Still, in case anyone tries to argue that Trump's no sexist "because he hired women," there's a real simple response to that.