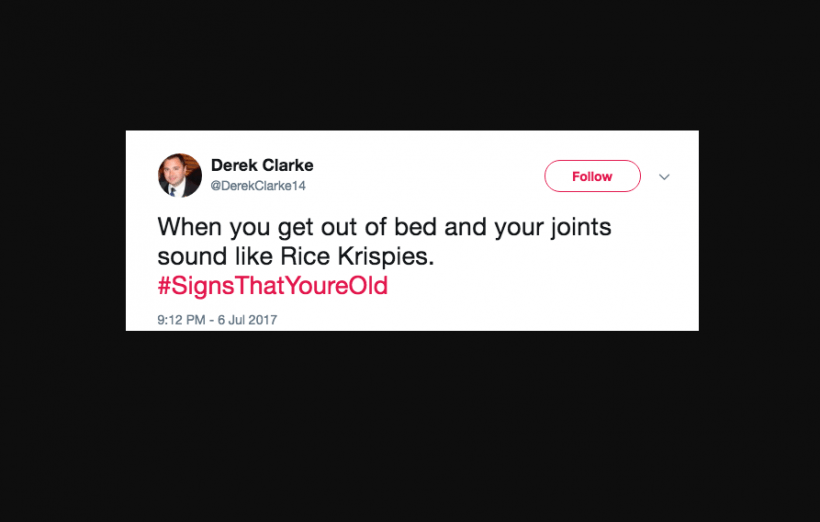 I'm a few months from turning ... hang on, I have a little vomit in my throat ... 35. I know, I know. It's not that old. But it's old for me, the woman who still geeks out over Teenage Mutant Ninja Turtles and has a tattoo of Super Mario on her finger. Yeah, that's right. What of it?

So even though I've been dreading the day in early October when the clock strikes midnight and I'm officially in my mid-thirties, I've been reassured by friends that it'll be OK.

Yeah, OK, and I can sing "My Heart Will Go On" better than Celine freakin' Dion. (I actually think I can but that's for an entirely different day!)

Who else still thinks the 90s were only ten years ago? HOLLA!

Who else gets hot flashes so intense they wet their bed sheets? HOLLA!

If you holla'd with me, then you've passed the exam and get a badge of honor.

HAHA, just kidding. Back in my day, we didn't get participatory awards. We had to work hard for the shit we earned.

And then Twitter decided that today, #SignsThatYoureOld would trend all day. Because I'm a twitterholic (that's a legit thing, right?), I've been reliving my childhood all damn day.

I've included my favorites here because I love you and know that you'll laugh at these like I did. And maybe pee a little, too because BLADDER CONTROL IS AN ISSUE, PEOPLE!

I can literally sing every word of every Madonna album, ever. Try me, I dare you!

#SignsThatYoureOld. Can remember every word of an 80's song, but don't know what you came into the room for. pic.twitter.com/z64vdPsCMB

I'm SUPER pleased I'm not the only that does this.

#SignsThatYoureOld When you forget what you said right after you say it.

#SignsThatYoureOld 80s songs are called Oldies and you laugh

I wore out my Barbie Goes Shopping floppy disc on my Commadore 64.

Those were called the "Good old days!"

Not being able to be on the internet and on the phone at the same time
#SignsThatYoureOld pic.twitter.com/34oQCbZudq

#SignsThatYoureOld when you hear teenagers outside past 10 being loud and for a second you think of calling the cops.

#SignsThatYoureOld when you hear teenagers outside past 10 being loud and for a second you think of calling the cops.

Drake? I only know of a Drake cake and those were yummmmmo!

#SignsThatYoureOld
You recognise less and less of the artists who are topping the charts. pic.twitter.com/o0XDst7UpG

If you don't get my references, we can't be friends.