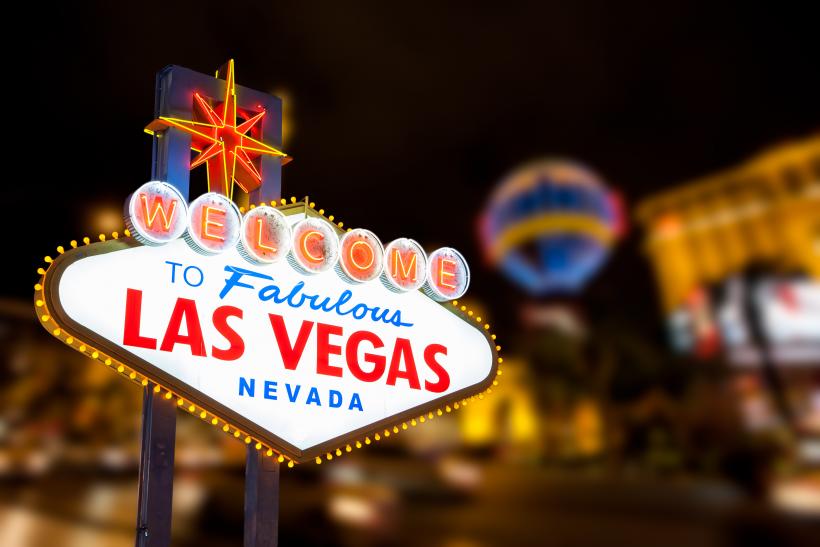 That Christmas Eve in Vegas changed me for life.

I remember so much vivid detail from the 24 hours I spent bumming around the impressively un-festive City of Sin one fateful Christmas Eve that the event feels much closer than its 11-year distance.

I’d recently relocated to Waco, Texas as a 23-year-old with big dreams of transforming young minds through the power and poignancy of poetry and luminous prose. I’d also, truth be told, used the excuse of a master’s program at Baylor as an exit ramp off the heartbreak express. Getting over a particular ex-boyfriend had proven too painful and challenging when signposts of our happy past were distributed liberally all over Denver. I know some say: “You can’t run away from your problems” — but frankly, I thought (and still believe) that adage is a load of crock.

What does any of this have to do with Christmas in Las Vegas, you ask?

Well, here’s what: my flight home got its butt kicked by one of those blizzards that seem to happen alarmingly more than once-a-century.

Picture the scene: There I was, December 20th, all a-jitter to escape the mild weather, cultural wasteland, still-somehow-insect-ridden-in-winter central Texas that had been working overtime for the better part of seven months to annihilate me. Don’t let Fixer Upper fool you. The reality of Waco on the ground, at least for those of us surviving on a rural teacher’s salary, was not all ship-lapped bakeries, baby goat herds, and charming farmhouses.

It was more regular bug brigades in a ground-level apartment, buying groceries at Wal-Mart with checks that might or might not bounce, and striving mightily not to kill an innocent turtle or two while driving on country roads with 70+ mph speed limits.

So I’d been looking forward to the pristine cold of Colorado, if just for the guarantee that nature’s insect creatures would be good and dead by the time I got there. Plus, Mom and Dad would have groceries at the ready.

Of course, I needed — emotionally — to be home. I needed to see my parents, my sisters, my brother, my old friends.

My soul was desperate to be reminded that I was not just a lost, single 20-something, a mediocre teacher, a bit of a slacker graduate student slogging through one exhausting day of a thousand tiny defeats after another.

The storm that knocked my flight out was so immense it shut Denver’s airport down for three days. I couldn’t get a real airline rep on the phone, so I drove 90 minutes up to Dallas and waited in a winding line to talk to a human face. I saw one anxious would-be traveler after another get told they would not be seeing the Mile High City before December 27th, December 29th — even New Years.

That was not going to work. The idea of Christmas alone in Waco terrified me in a way difficult to describe. It had been a rough year. I didn’t just need a break. It felt more like my very being depended on getting the hell out for a minute.

So I steeled myself and made a deep-down, true-blue promise: I was not leaving that customer service counter without a flight out of Texas, and I was going to be in Colorado for Christmas. (I prayer-bartered hard with God in that line.)

And behold, a holiday miracle occurred. A wily flight attendant worked some wondrous marvel and found a way. I could fly to Las Vegas on Christmas Eve and then to Colorado on Christmas Day.

I arrived in Las Vegas late in the afternoon of December 24, 2006. The airport was surprisingly crowded with lots of 30- and 40-something singles — just a host of solo travelers in general.

The year had worn me down, and I imagined Las Vegas — the anti-Christmas of American cities — would be cathartic. As if seeing my mood reflected in physical reality, I’d stand in this place defiantly saying NO to glad tidings of great joy and be somehow transformed through the experience.

There were some "glass-half-full" attempts made by yours truly in prep for this trip. I’d actually been kind of excited to eschew the childish, saccharine side of Christmas and embrace cynicism like a grown-ass adult.

One of those “mature Jess” choices was to purchase a ticket to Second City's Christmas Eve improv show. I'd heard all the good things about the troupe, and I justified splurging as a deserved holiday treat to myself. After checking into my room at the Hard Rock, I killed the hours before the show reading The Jane Austen Book Club, chosen specifically for its predictable fluff. It did not let me down.

I hailed a cab to The Strip, where the comedy show was on. Upon arrival, I handed the driver my credit card. He scowled, pointing to the large and un-missable sign I’d still somehow totally missed that stated: CASH ONLY.

Naturally, I'd left my debit card in the hotel room. All I had was one credit card. The idiocy of this decision will never leave me. To this day, I carry at least three forms of payment at all times.

But what could he do? He told me to get out. I did. He sped away. I freaked.

How was I going to get home? I'm not one to push my luck with aggravated cab drivers, especially not when they're pissed off already about working a holiday.

I called my best friend Katie, in-medias-panic. She sat and sifted patiently through the hysteria and expletives, then calmly advised I try to extract cash with my credit card from one of the copious ATMs.

Never before had I done this. I was 99.9% sure that my credit card was not authorized for cash advances. I had no pin number, Lord have mercy.

But I did as I was told, praying again for a moonshot win. And after whispered encouragement to the machine, somehow a crisp $20.00 bill emerged.

Renewed with life and hope, I made my way to the theatre. There, I got quickly reacquainted with the disappointment I’d come to expect from that December.

While a description of the show may help in visualizing this scene, all you really need is to remember that one Tuesday you got dragged to open mic night. Middle schoolers are regularly wittier than the agonizing missed timing and flat jokes I cringed through for TWO HOURS. And while the second-string performers did plenty to warrant heckling, my fellow patrons’ vocal contempt bordered at times on cruel.

This was Christmas Eve still, right? Maybe let the understudy with no discernible understanding of humor just dream for one night.

But by this point, all the misfortunes piling up around me were beginning to take on an amusing stank.

The makings of a great, miserable Christmas story were in the works here, and who was I to stop the tragedy from unfolding?

After paying my cab driver (in cash, thank you baby Jesus), I went back into the hotel.

One of the strangest things about Las Vegas during Christmas, or at least how The Hard Rock hotel dealt with December 25 in 2006, was the utter dearth of decorations. There were none. The lobby casino sat as it would any other day of the year — cigarette-fumed, slot machines psychotically blinking — not a wreath or jingle bell in sight. I wandered about on the grey carpet, surveying the motley crew of other lonely creatures out here like me on the night before Christmas.

Look, I know not everyone celebrates Christmas. I know, for literally billions of people, December 24 & 25 are just two of the last days in any given year, nothing more. For me, though, they were traditionally the only occasions I felt free being hokey and outlandishly hopeful.

I'd assumed I'd appreciate Sin City in 2006 because I didn't possess the emotional strength to engage in that annual dream-weaving. The year had worn me down, and I imagined Las Vegas — the anti-Christmas of American cities — would be cathartic. As if seeing my mood reflected in physical reality, I’d stand in this place defiantly saying NO to glad tidings of great joy and be somehow transformed through the experience.

But that’s not how it was. I missed the sight of delicate ornaments, missed hearing the simple melodies of long-known Christmas songs, missed the clean quiet of snow-coated evergreens. I realized that though it was hard to be alone for Christmas, it was more painful to pretend the holiday wasn’t happening — to imagine I could skip it altogether. My current misery couldn’t erase happier Christmases past, couldn’t expunge the memory of joy from my heart — even if the feelings themselves couldn’t be coaxed to materialize.

I wasted one dollar on a machine, gave the bleak foyer a final once-over for good riddance, and bought some whiskey from the "convenience" shop. The rest of the night was spent in my room, where I blurred the hours away with Jim Beam shots and A Christmas Story on cable.

I made my flight home, landing in Denver around noon on Christmas Day. The holiday progressed more or less “normally” from there. That Christmas Eve in Vegas changed me for life, though.

I’ve tried to remember not to deny myself the things I love about the holiday just because my life doesn’t always look or feel like a Hallmark movie.

There’s no shame in basking in the season’s warmth of lights and fires and impossible belief in goodness. Sometimes we’re made to feel our access to that is denied because our lives are vibing more Pottersville than Bedford Falls.

But — believe me — that’s no reason to damn oneself to festive-free exile in Las Vegas.