Technology In The Classroom: A Threat To Students' Learning & Their Health 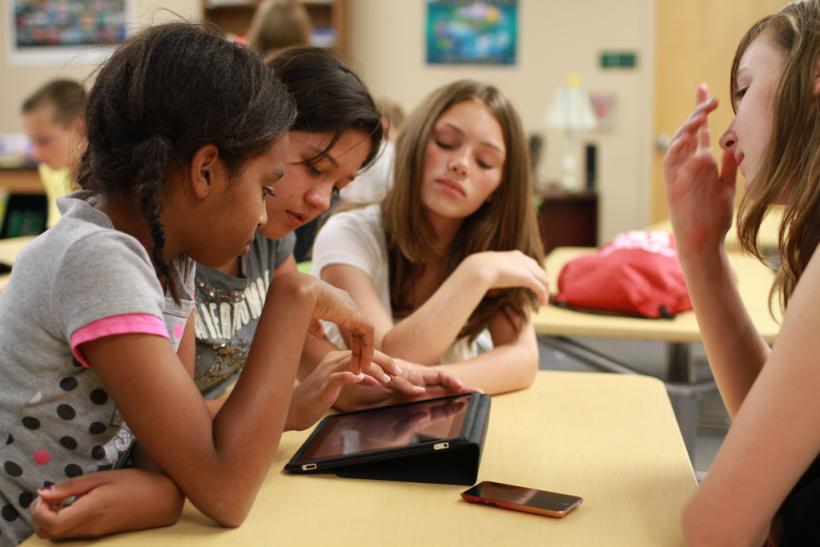 The kids who often need more help and guardrails to ensure effective learning are also the ones who suffer the most from ubiquitous tech in the classroom.

Denver anesthesiologist Tim Farnum's potential ballot measure to restrict smartphone sales to kids seems pretty in character for my home state. After all, Colorado is the first place to legalize recreational marijuana, it's the only state that allows parents to sign a nondescript waiver to be freed from vaccination requirements, and it's a veritable charter free-for-all. It's a wild, independent, experimental kind of place that doesn't mind being the first/only state to try something new.

So it makes some sense that Colorado might also be the first to designate smartphones a public health risk for young people.

Like many a parent, Farnum wanted to give his sons access to the vast trove of knowledge known as the Internet. Perhaps he shared another parental motivation for giving kids smartphones: that they not get left behind. We want our offspring to be fully proficient in the modern economy. For that to happen, they need to understand and work well in the tech of the day.

But Farnum noticed a marked shift in his kids after they'd spent some (un)quality screen time with their new devices. They became sullen, angsty. Asking a son to give up the smartphone once resulted in a breakdown from him akin to, in Farnum's telling, the "withdrawals of a crack addict."

So Farnum started doing his research. And he discovered what many a parent has experienced: these little pocket computers wreak some nasty side effects on young people's mood and behavior, not to mention the healthy development of their brains.

This growing problem of how young people are impacted by the technology around them has been popping up in multiple places. 60 Minutes and PBS NewsHour recently interviewed Tristan Harris, a former Google employee who found himself disturbed by how the tech industry approaches software development. From labs at Stanford that taught students how to maniuplate users via persuasive psychological principles worked their program designs to his Orwellian title as "product philosopher" while working for Google, Harris paints a pretty bleak picture about the enormous influence of Silicon Valley's tech behemoths and how little regard they have for the overall wellbeing of their customers.

In short: it's all about those Benjamins.

Rather than discuss how constant attachment to the screen may not be a healthy habit for adults, let alone kids, Harris says the design decisions he and his colleagues engaged in never addressed any bigger questions. We're in an "Attention Economy" where Netflix CEO Reed Hastings literally lists sleep as one of his company's biggest competitors. The question isn't what's good for you or your child. The question is how a designer can hook you on a site, make you stay, keep you and your child there by any means necessary.

Everyone wants your time... and your child's time too.

One observation from Harris is particularly stunning: "Never before in history have 50, mostly male, 20 - 35-year-old designers living in California at three tech companies influenced how a billion people spend their time."

And that competition for your attention and the big bucks it brings has not been lost on the multi-billion dollar industry knows as EdTech.

Consider this: 12.6 billion mobile devices shipped out to primary and secondary schools in 2016 alone. And as Natasha Singer at the New York Times notes, tech companies count on their products' placement in schools as a way to hook users for life.

In the estimation of Apple, Microsoft, Samsung, et al., your son or daughter is a potential future buyer.

This Big Biz calculation is more sinister still when one considers the evidence that technology not only does nothing to improve learning — it can actually detract from it.

In 2015, an international study by the Organization for Economic Cooperation & Development found that the more students used computers in school, the lower their math and reading scores dipped.

That same year, the Centre for Economic Performance at the London School of Economics found that schools with a strict ban on cell phones experienced a 6.6 percent uptick in student learning outcomes. The most impressive gains from such a policy happened for students from lower socioeconomic backgrounds.

In other words: the kids who often need more help and guardrails to ensure effective learning are also the ones who suffer the most from ubiquitous tech in the classroom.

And finally, we arrive at the physical health effects of technology. No one yet knows precisely how dangerous the electromagnetic waves put off by our devices really are... especially for children.

And that's the point. It's a profoundly immense risk to be so laissez-faire about not knowing.

You might not be aware (I wasn't) that Apple itself cautions users not to touch too much the iPhone with parts of their body. It's somewhere in the tiny print of that little booklet that comes with your phone.

(Side question: How exactly is one supposed to minimize physical contact with a phone that has literally no interaction options without using fingers on a touch screen?)

To reiterate: as a grown adult, you are supposed to limit physical contact with your iPhone as much as possible because of the electromagnetic radiation emanating from out that device. That's according to Apple itself.

Yet, your school may very well be handing your 6- or 7-year-old an iPad or other tablet, zero eyes batted.

This is simply unacceptable.

Dr. Devra Davis spoke in 2015 about the fact that public health researchers and activists are not communicating with the leaders of technology. Her lecture on the potential health risks of WiFi devices like iPhones, iPads, and other Internet-connected tablets is sobering.

Perhaps Davis' most important statement is simply insising that "we have to recognize that we don't know a lot about the public health and environmental effects of this form of radiation."

It was a sad moment of commiseration for me when I read that many teachers are reporting that technology is changing the way their students learn — and not for the better. It's what I witnessed in my own classroom once district policy allowed students to use their phones throughout the school day. They became distracted, disinterested, and more depressed.

I never once got the impression those pocket computers helped them learn anything other than how to surreptitiously text at maximum thumb speed.

Perhaps Frum will be successful in limiting the sale of smartphones to young kids. I certainly hope so. Maybe more of us will heed Harris' warnings about what tech companies are willing to do to steal your attention.

But the most urgent matter for this former teacher is that we stop risking the educational potential and physical health of our students by deluding ourselves into the false promise of EdTech as a panacea for our schools' struggles.

If you like this article, please share it! Your clicks keep us alive!
Tags
Technology
education
Politics
health