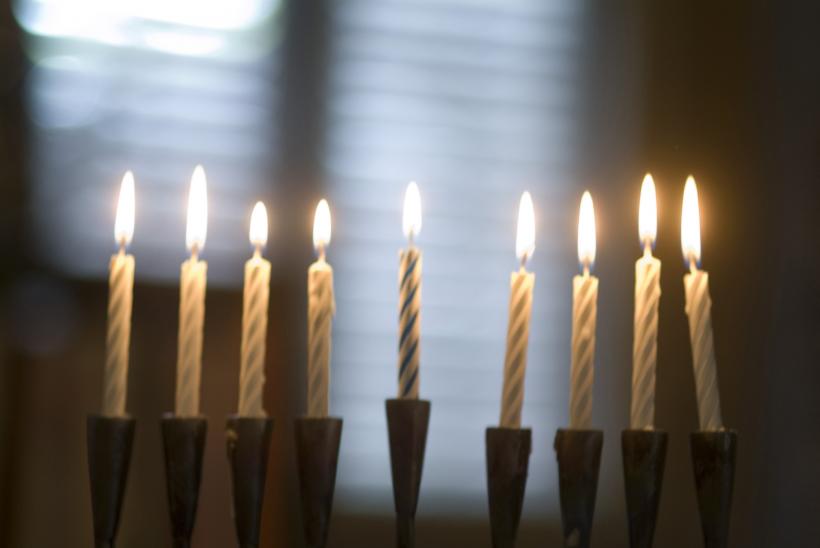 These are the things I miss about Hanukkah.

Holidays can be really, really hard. This seems to be true universally, whether it’s because of loss of family that used to take part in holidays or because it’s hard to see the family that you do have. In my case, it’s the former: My father, atheist and deeply Jewish at the same time, was my touchstone for Judaism growing up, and he died eleven years ago. The other touchstone, my family in Los Angeles, has been going through intensely rough times for a few years now, so the holiday celebrations that used to be traditional and routine are now few and far between.

I’ve been wondering lately how my recently born niece (who is already several months old; how does this happen so fast?) will celebrate holidays. Her father, my brother, has made one stride that I know of towards connecting her to her Jewish and Israeli background by deciding that he’s going to be an Aba, not a Dad. My father was an Aba. His father was an Aba. I don’t know what his father’s father was since they spoke Yiddish and Polish. My niece, a beautiful bundle of talkative human, burbles away at her parents in Instagram videos I occasionally watch for comfort, for the swell of love and connection. She will get to choose how and if to be Jewish since she’ll be living in a country whose default isn’t Judaism.

Holidays and tradition are so often discussed as serious and somber when practiced “correctly,” that is, religiously. But tradition, prayers, hymns — these can be joyful, silly, irreverent. The meaning doesn’t need to come from God or a god, but rather from the community that is shared between people finding an excuse to be together.

In the narrative of centered Judaism in which I grew up, I am what is called a Bad Jew. I don’t give a fig about keeping kosher, I don’t go to synagogue on Fridays (or any other time, really), and I remember only vague outlines of stories that go along with the various holidays. Those constitute the “Bad.”

I also grew up in Israel, went to synagogue for holidays as a kid, studied the bible for ten years at school (and got a really good grade on the attendant baccalaureate exam), speak fluent Hebrew, had a proper Reform Bat Mitzvah (where I read-sang the appropriate Torah portion and made a speech in front of a bunch of family members), I remember the Hanukah song Maoz Tzur by heart, and my mother is Jewish. All of that covers the “Jew.” And for a long time, I’ve been content to be a Bad Jew.

But recently, I’ve begun to miss the celebrations that defined me as culturally Jewish, regardless of my disbelief in any god.

Jewish holidays are generally lots of fun — there’s food, which I don’t care for much, and storytelling, which I do. Some of my favorite children’s books were Hanukkah-related. Hershel and the Hanukkah Goblins by Eric Kimmel taught a dreidel game that my brother and I played with the agorot — the Israeli equivalent of pennies — that we got as an allowance. The Gift by Aliana Brodmann is about a girl trying to buy herself something with her Hanukah maot, or allowance, which she ends up giving to a street musician who plays the accordion and offers to teach her (sidebar: only in approaching the book again as an adult do I realize its anticapitalistic message that privileges the recognition of art over materialistic goods).

Hanukkah was special, in part, because of the ritualistic repetition involved. Every night, our family came together to light the Hanukkah candles. My brother and I each had our own hanukkiah (or menorah as some people call it — though a menorah has seven stems and a hanukkiah has nine). My brother’s was delicate and silver and always more tarnished and grey than gleaming. Mine was a large, heavy thing, a vaguely golden-brown that should have been burnished more often; I should have at least scraped the wax off of it. But part of the joy, for me, was watching this bit of metal age with us. During the rest of the year, they sat atop one of our large, custom-made bookcases, alongside other pieces of ritual practice, vases, the huge wooden salad bowl used for the rare dinner hosted for friends, and family heirloom figurines that are more sentimental than valuable. But when Hanukah rolled around, the hanukkiot came down, the insides of the candle-holders scraped out, and new Hanukkah candles, which for some reason, as a rule, came in pale blue boxes, would be chosen and carefully placed in the stems each night.

The candles are only one part of the elaborate ritual. Over the last few years, my mother, brother, aunts, and I — we’re scattered around the US and Canada — try to do a big shared video-chat so that we can light candles together, but since our cameras usually are trained on our faces, the real reason we’re together is to recite the prayers and sing the songs together.

There are all sorts of holiday songs in Israel for Hanukkah, many of which I was taught in kindergarten and have long since forgotten. But the one that makes me most glad and sad at the same time is Maoz Tzur. In researching the meaning of this melody and lyrics which could be called a hymn, I learned that it is known to have been sung since the middle ages and that both Ashkenazi and Sephardic Jews are familiar with it.

I knew none of this as a child, and it barely matters to me now.

What matters was how we sang it. Which was together.

For a couple of years, my brother’s snarling teenage phase didn’t allow him to participate, and I grew shy and reluctant during my own adolescence. But for the most part, my father, brother, and I would sing this song together, every night, from start to finish. It’s a long song, and most people only sing the first part, but we went through the whole thing, and every night we’d sing it faster and faster until by the end of the eight days we were all cracking up and racing each other to see who could sing the fastest.

Holidays and tradition are so often discussed as serious and somber when practiced “correctly,” that is, religiously. But tradition, prayers, hymns — these can be joyful, silly, irreverent. The meaning doesn’t need to come from God or a god, but rather from the community that is shared between people finding an excuse to be together. This is what I hope my niece gets to experience, and I know that when she’s old enough, I’ll be crouching next to her and guiding her hand as she lights the candles. And, if she’s anything like her aunt, she’ll come to enjoy the silly songs with the reverence that is love.

If you like this article, please share it! Your clicks keep us alive!
Tags
Hanukkah
traditions
Jewish
Jewish culture
holidays
families

Why Can't I See My Body The Way I See Other People's Bodies?
Ilana Masad