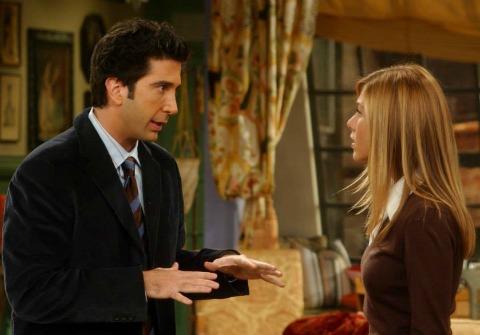 Friends fans can't contemplate the awesomeness of the show without discussing the tumultuous love affair between Ross and Rachel. Today marks the 10th anniversary of the Friends series finale, but the on-again-off-again pattern rings true for countless cannibalistic hearts alike. From the passionate kisses to the break ups ("WE WERE ON A BREAK!"), you had to be made of stone not to be moved by their emotional upheavals. An estimated 60% of adults have engaged in this crazy cycle, and we're here to give ya some tough love:

It's not going to work out. Regardless of what the love lives of fictional characters suggest, it's difficult to break a pattern. And—surprise, surprise—said pattern is not healthy. Well, usually.

There are two main types of this bad romance: the capitalized-on-transitions, and gradual expectations.

Capitalized on Transitions
As the lesser of the two evils, this is the early Justin Bieber to the current whoremongering baby face that assaults the tabloids. See, this category of romantic relationship is realistic in the sense that the couple recognizes that their relationship won't last if they continue their behaviors. Breakups for these folks are perceived as a time to reflect on the relationship and how it may be salvaged.

Of course, the fact that people usually don't change doesn't help the matter. Like baby vs. current Justin Bieber, it may begin naively but will eventually morph into something monstrous.

Gradual Expectations
And here we go with the bad. This pattern is determined by the couple steadfastly believing that things will be different this time. "You just don't understand guys! You don't know what we're like when we're alone!" Yeah, yeah—we've heard it (or, said it) all before. These foolish folks come running back thinking that things will magically change, but often find themselves splitting for the same reasons as before. Often, the person does alter behavior—but, it's almost always temporary. Soon, old patterns will made a ghastly reappearance. Hopes soar, only to plummet to the rocky ground. Again. And again.

Sure it's easy and comfy to slip back into something that worked at some point—nostalgia is mighty powerful—but this is a a toxic paradigm people. There's an added degree of stress on these types of relationships that simply isn't present in others—the unresolved issues from the last love-bout won't disappear. Much like the refrain "we were on a break," the same problems will crop up repeatedly. This adds a layer of hostility that simply isn't present with a fresh new love.

Sorry folks, but there's no way Ross and Rachel stayed together. It's not in their pattern. Rachel would probably resent Ross for giving her a reason to turn down that dream job with Louis Vuitton in Paris and Ross will never be able to actually get over all. those. insecurities—from secret lesbians to being too nerdy—surrounding their love. Don't use them as a model of behavior—make your own love story.

Image: what bad examples. Ross and Rachel, courtesy of Facebook