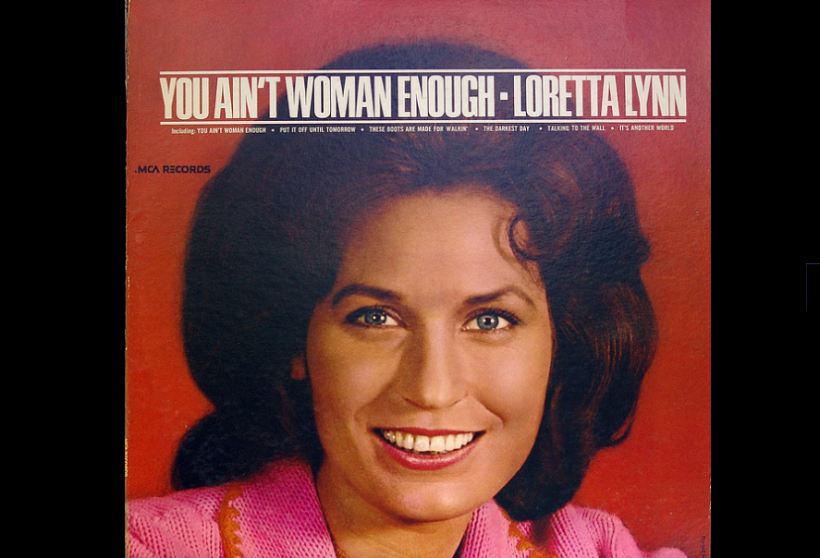 If you're like me, you know of Loretta Lynn—country singer-songwriter extraordinaire born a coal miner's daughter—but weren't aware of her total feminist bad-assery and general shit-kicking in terms of reproductive rights for women. I stumbled across this article today about "The Pill," a song about the glory of birth control that Lynn wrote in 1975, inspired by her early days of marital bliss (she was 16 and pregnant) to Oliver Vanetta Lynn Jr.

While the story goes that Oliver gave Loretta her first guitar for their 6th anniversary and encouraged her natural ability, he was also very busy impregnating her; she had had four children by the time she was 20 and she went on to have two more. It's no secret that Oliver, who went by the nickname "Doo," was a philandering bastard and an abusive alcoholic, and that their marriage was generally, how-shall-we-say, dysfunctional. But they stayed together for 50 years and she still believes their tale was ultimately a love story:

I married Doo when I wasn't but a child, and he was my life from that day on. But as important as my youth and upbringing was, there’s something else that made me stick to Doo. He thought I was something special, more special than anyone else in the world, and never let me forget it. That belief would be hard to shove out the door. Doo was my security, my safety net. And just remember, I'm explainin', not excusin' . . . Doo was a good man and a hard worker. But he was an alcoholic, and it affected our marriage all the way through. —Still Woman Enough: A Memoir.

Loretta leveraged her heartbreak, betrayal and blur of pregnancies into women's rights anthems, tackling everything from gender stereotypes ("Rated 'X'") and the woes of childbirth ("One's on the Way") to drunken, overly-amorous husbands ("Don't Come Home A' Drinkin' (With Lovin' on Your Mind") and of course, the sheer joy of sexual freedom with "The Pill."

While the first birth control pill was legalized for contraception by the FDA 15 years prior to Loretta's "The Pill" in 1960 (previously it had been sanctioned for severe menstrual disorders), its reputation and societal support was ever-controversial and consistently challenged. Four years later the pill was still illegal in 8 states and in 1968, Pope Paul VI openly declared the Church's opposition to it, making Catholics miserable everywhere.

As we all know (and head-shake about) this particular facet of the Affordable Care Act—which requires employers to offer health care that included birth control to their employees—has been contested seriously most famously by Hobby Lobby, and is still under fire. (The Supreme Court is poised to vote in June.)  What's the upside of this misandry and anti-progressive mind-schlock that seems to plague America?

This isn't only a women's health issue. It's an issue that is just as important to families and communities...Our findings suggest that a policy requiring all health insurance plans to cover birth control medications is consistent with the beliefs of the majority of Americans."  —Michelle Moniz, MD, researcher at the University of Michigan Medical School, study author.

Maybe Taylor Swift or Carrie Underwood will carry the torch and write this generation's pro-Pill anthem? Until then (but don't hold your breath bitches), revel in Loretta's bravery and general awesomeness below: