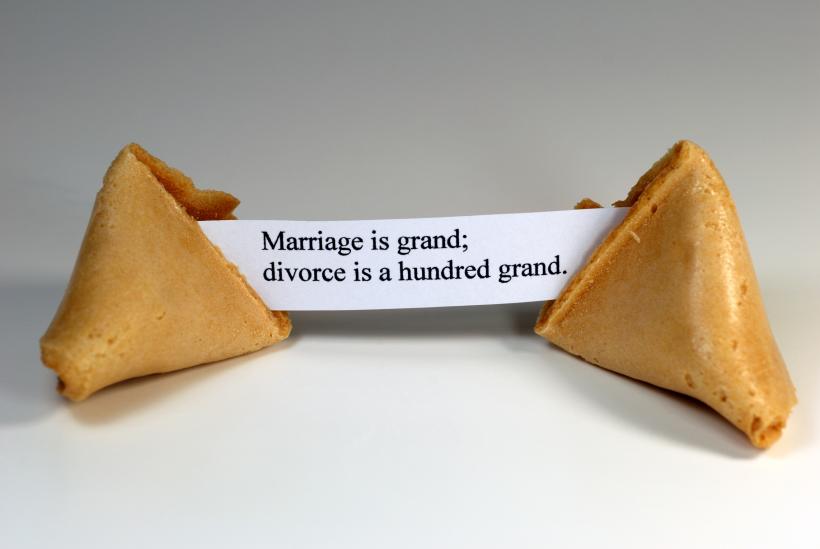 Before you purchase those leopard-print pants, you should try them on, right? (I mean what if they give you saggy-rum?.)

Should we be “trying on” marriage as well? Logically, it makes sense. I know I’ve tried on about 20 jeans for every pair of pants that I actually ended up buying. Alas, research has slapped logic in the face on this one: couples that live together before marriage are more likely to be unhappy with their spouse than those that don't.

You know what that means (hint: it starts with a “d” and ends with “ivorce”). We've watched everybody from our own parents and love-lorn relatives to friends' parents and everybody in between make a one-way trip to Splits-ville—so it makes sense that we’d search for a logical way to preempt all that potential hardship. But as it turns out, cohabiting isn’t the way.

Actual stats on this are a bit shaky:

1. Not every unhappy marriage ends in divorce.

2. It’s difficult to measure “unhappy," but it’s estimated that about 70% of U.S. couples choose to cohabit before tying the knot.

(To contrast, in the 1970s, only about .5% of the population lived together before marriage. And rather than decreasing the divorce rate since then, our percentages today are actually similar.)

The data suggests that we noted rampant divorce rates and thought, “Maybe if mom lived with dad for two years before marrying, she would have noticed that he can’t save a dime and she would have ditched him for Bill Gates.” Not necessarily. According to psychologists, your mama would have said something more along these lines: “My boyfriend sucks at saving money, but we’re already living together so it just makes sense to get married next.”

Turns out that people perceive moving in as a “step” rather than a trial period. Marriage (even if you’re not excited about the prospect) must be next. Or, they get lazy and don’t feel that fighting over a Blu-Ray collection is worth being single again. Either way, apathy sets in.

Sliding into cohabitation wouldn’t be a problem if sliding out were as easy. But it isn’t. Too often, young adults enter into what they imagine will be low-cost, low-risk living situations only to find themselves unable to get out months, even years, later. It’s like signing up for a credit card with 0 percent interest. At the end of 12 months when the interest goes up to 23 percent you feel stuck because your balance is too high to pay off. In fact, cohabitation can be exactly like that. In behavioral economics, it’s called consumer lock-in.

Lock-in is the decreased likelihood to search for, or change to, another option once an investment in something has been made. The greater the setup costs, the less likely we are to move to another, even better, situation, especially when faced with switching costs, or the time, money and effort it requires to make a change. — Meg Jay, Clinical Psychologist, NYTimes

But don’t freak out if you currently live with your sweetie(!)—everyone is different. There's lots of folks out there who feel that living together first helps strengthen the relationship—as long as you take the commitment seriously. Be honest with each other (and yourself) and don't be afraid to make a tough decision. Pack up your shit and get the hell out of dodge if you have any hesitations about tying the knot.

If you like this article, please share it! Your clicks keep us alive!
Tags
Love
marriage
Sex
Relationships
living together
cohabit
divorce
fighting