Scout Willis Goes Topless in Protest, We Ponder the Power of a Naked Nipple 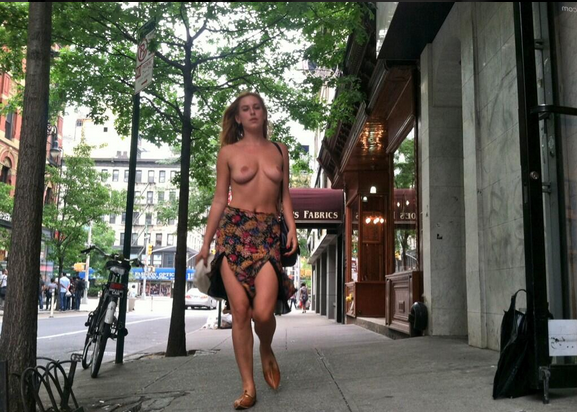 This whole Scout Willis #FreetheNipple situation (set in motion nearly four years ago, complete with its own hashtag) has gotten me thinking.

I've been a bra-less sensation since my chest cropped up with the three inches of convex-tivity that I currently call my breasts. (I was 15 before I had anything remotely resembling boobs. I used to jump up and down in the mirror boring my eyes into my nipples to see if anything was even moving up there.)

The point is, since puberty, my own nipples have been at the forefront of mind every time I get dressed. Because I never have and never will be a daily bra wearer, I've carefully curated a wardrobe that allows me to bounce around town without arousing every man within a 10-foot radius. Is it wrong that I think it's my responsibility not to offend people by being too provocative, too naked, too remindful of what's underneath my clothes?

My argument has always been that my breasts are so small, they're simply not much to stare at or get offended by. If I had big 'ol beautiful knockers, it wouldn't be so easy to quietly flaunt my areolas. There'd be a helluva lot more movement, shall we say, and a much um, bigger situation to contend with.

That being said, I also don't wear skin-tight white t-shirts where my (apparently) erection-inducing light-brown circles can be seen. I guess I've always been more-than-aware—and celebratory—of the simple fact that we're hot blooded mammals. Seeing women's nipples is an erotic thing—even for little 'ol heterosexual me: the sweet swaying of a heavy breast, the busty bouncing profile of a woman crossing the street, and yes, even a woman breastfeeding. It conjures images of fucking, of milk, of life; just because a woman wants her breasts to be negated sexually, doesn't mean people's minds will follow suit. We're hard-wired to want to suck, stare and play with breasts and nipples.

Scout recently wrote a great piece on XOJane addressing her decision to try and take down the Instagram Man using her breasts (her account had been deleted due to "instances of abuse" which basically translates to visible nipples.) To make a long story short she took to the streets of NYC topless and documented the whole nipple-traipsing on Twitter as her personal protest. Her words:

I understand that people don’t want to take me seriously. Or would rather just write me off as an attention-seeking, over-privileged, ignorant, white girl. I am white and I was born to a high profile and financially privileged family. I didn’t choose my public life, but it did give me this platform ...

What I am arguing for is a woman’s right to choose how she represents her body -- and to make that choice based on personal desire and not a fear of how people will react to her or how society will judge her. No woman should be made to feel ashamed of her body ...
I never claimed to believe that my actions of the past 48 hours would solve anything -- far from it. But what they did achieve was to provoke conversations about gender equality and body positivity that are both necessary and sorely lacking.

I guess what I'm wondering (in addition to the whole white privilege, famous daughter thing compounded by the conventionally "hot" body and a damn nice set of tits thing) is whether #freethenipple is really the way to actualize change. Is "provocation" enough? And are bare nipples really at the crux of achieving gender equality and body positivity?

Do I think women who are breastfeeding in public should be leered at or commented upon simply because their nipples are visible while they're trying to feed their infants? Fuck no. Do I think women who choose to have their nipples visible through shirts should be sexually harassed on the streets? Fuck no. Do I think men and women's nipples are fundamentally different in a sexual context? Fuck yes. Not only do scientists still believe men's nipples are an evolutionary snag (all nipples develop in utero; a stage where gender hasn't been differentiated yet), but they also—for a bevy of reasons—are simply not as sexualized.

Unless we're going to reprogram society Clockwork Orange-style about their instinctive response to nipples, I think women just have to accept that see-through shirts are going to garner some possibly unwanted attention.

I am more-than-into Willis' odd crusade, where she dons a sheer tank top and calls it a "casual form of protest," but I think she also needs to take off her blinders here; until visible nipples become the norm—as opposed to the titillating (ha!)—people are gonna stare a bit.

And isn't that part of the fun?