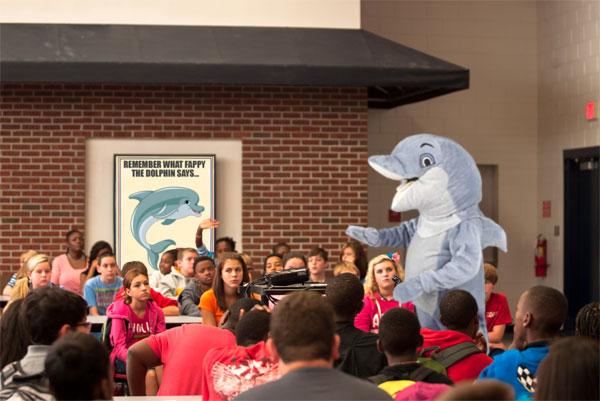 In an Internet experiment so complex that even Rube Goldberg would scratch his head, we recently met Fappy the Anti-Masturbation Dolphin. This self-pleasure-loving mascot has appeared in various fake news reports, and appears to be aimed at targeting two controversial subjects: the agriculture company Monsanto and the hate-spewing Westboro Baptist Church. Faux stories have claimed he's sponsored by Monsanto, while the number on a website for a fake movie about him is for the controversial church (which has led some to speculate the church is actually involved in the hoax).

The Facebook page (yes, there is a Facebook page) laments the scandal with woes and concern dripping in derision:

If you completed the ninth grade, I don't even need to express the absolute hilarity of the name "Fappy" for such a creature, do I? And, as we recently discussed, dolphins are sexually deviant animals. But the real kicker? Sticking Monsanto's name on it. It's hard not to laugh at the (fabricated) idea that—in between banging their own GMO-riddled cucumbers while swimming in gilded pools of money that would make Scrooge McDuck green to the damn gills—Monsanto is sponsoring an anti-masturbation dolphin.

Seriously folks, you can't make this shit up. Except actually, you can.