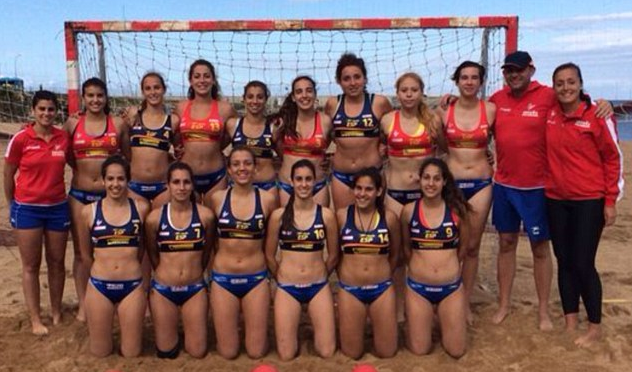 Ask people about the women's World Cup—a topic that's come up frequently in the wake of the recently wrapped men's World Cup—and you're likely to hear about that time U.S. player Brandi Chastain took off her top in victorious exultation and exposed the world to her sports bra.

This anecdote—which tends to leave out the part about her team scoring a goal before the clothing was shed—perfectly encapsulates a sad truth about female sports: For ladies, it's all too often about skimpy outfits doing the selling, rather than actual talent.

Yes yes, male athletes too are objectified as sex objects. (Hellllllo David Beckham!) But men also wear, you know, actual athletic clothing when playing sports. Like shorts and shirts! Women however frequently take to the field or court in barely-there outfits that keep the focus squarely on their smokin' hots—seemingly to ensure male spectators pay attention.

It'd be one thing if women chose to wear these outfits for comfort—and certainly they sometimes do—but a new case makes it clear that for many, such clothing isn't a choice at all.

Last week, Spain's Basque Handball Association presented an official complaint to the European Commission decrying regulations that dictate females must wear bikini tops and bottoms no wider than four inches. Why? So (and we quote) these women can "leave their stomaches exposed." Because no sport is complete without ogling some lady midriffs, are we right? Conversely, the association noted, men are free to wear loose, comfortable clothing that keep their stomaches clandestinely under wraps.

The complaint was filed after the Spanish Handball Federation threatened penalties because 21 of 22 female athletes had the audacity to cover up their bodies with normal clothing. And this clothing double standard, the women claim, is in place for one shameless reason: to "lure people to the sport."

Spanish handball players are hardly the only woman athletes who've had to appease male fans with the promise of flesh. Modern female lacrosse players still wear skirts and tennis stars frequently run about in short, body-hugging dresses. And let's not forget volleyball players who don bikinis as they serve, set and spike. (Because what's more comfortable than two inches of spandex gathered between your thighs as you sprint across sand?)

This phenom taps into inherent sports sexism that never. seems to go away. More than 40 years after Billy Jean King trumped Bobby Riggs in the Battle of the Sexes tennis match—and even with insanely talented women like Serena Williams and Maya Moore displaying their athletic prowess—female sports continue to be viewed as a second-class sideshow.

The double standard taps into the oldest stereotype in the book—men are tough and strong, women are delicate and weak!—and as such, seems poised to remain culturally entrenched for a long time yet. To take but one example: while the WNBA game viewership is on the rise, even playoff games still net somewhere around half a million viewers. NBA playoff games, conversely, routinely lure upwards of 3 million devotees.

And so it goes that with people unwilling to watch women sports on the merits of actual athleticism, females have been forced and even regulated to seduce with their sexuality. The blame for this rests in part with organizations like the Spanish Handball Federation, of course. But it also rests with viewers who, due to deeply held gender assumptions, are unwilling (perhaps even unconsciously) to watch women play sports unless there's something else to get them interested (wink, wink).

In other words, if the talented women of the Spanish handball team start covering up . . . will you still promise tune in?

If you like this article, please share it! Your clicks keep us alive!
Tags
sports
sexism
female athletes
clothing
Spanish
handball
complaint
bikinis