Apple a Day Keeps Your Sex Life Okay: The Unlikely Intersection of Feminism and Fruit 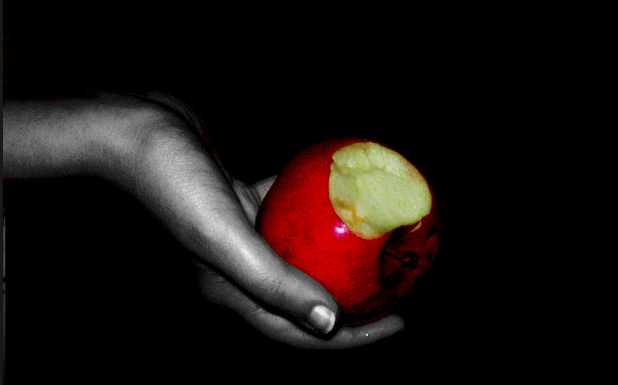 Holy Johnny Appleseed, do we have some awesome, apple-laden news!

A new study published in Archives of Gynecology and Obstetrics found that women who eat apples regularly had better, er, personal lubrication and vaginal abilities. And yes—cynics!—this may just mean that women who eat apples regularly are just healthier in general. (And overall health may equate with better naughty bit function.) But let's dig into the science a bit shall we?

Turns out apples contain polyphenols and antioxidants—both of which aid blood flow. (Pretty sure I don't need to tell you that this affects arousal in general.) Polyphenol is a type of antioxidant that possesses phenolic acids. When inside the apple, phenolic acids aide with ripening and growth regulation. When inside you, it further assists the other antioxidants (found in colorful fruits and vegetables), which defend healthy body cells against damage, which in turn benefits your cardiovascular system (hence the healthy blood flow) and helps prevent cancer (!).

These sweet little orbs also boast phloridzin, which helps regulate blood sugar levels, blood pressure and protect the heart . . . but its most important impact to your Saturday nights? It aids in the proliferation of estrogen.

The Intersection of Science and Storytelling

Apples have a lengthy history of representing fertility and women's beauty in ancient mythology. For example, this excerpt from epic (maybe) lesbian Sappho circa 600 BC depicts a sweet apple just out of reach:

A footnote explains that the apple represents the sexuality of the virginal woman just out of reach, tantalizing, pristine, unsullied. But no fruit/feminism discourse would be complete without discussing the 300-pound apple in the room: namely the mega harlot Eve.

As we all know, Eve is convinced by snake/Satan to eat the apple from the Tree of Knowledge, Adam and Eve get banished from the glorious garden and humanity has been suffering ever since. (So says the Bible.) Interestingly enough, however, the Bible actually only tells us that minxy Eve eats "forbidden fruit" per the snake's advice, rather than specifically an apple; and it's never even explicitly stated that the garden snake is Satan. Go ahead and look all that up if you want. I'll wait.

In reality, the inventor of the apple-laden forbidden is none other than John Milton in his epic poem (epic as in genre, not: dude, this burrito's epic) Paradise Lost. In his novel-length prose, the serpent (decidedly Satan—disguised—this time) entices Eve to eat the fruit by showering her with compliments and assuring her that the apple is sure to tantalize her tongue. And then, well, darling Eve takes that bite and stuff gets sour.

Not so surprisingly, Milton's work may have reinforced some not-so-savory gender relations when this poem was published in 1667. Want to know what was going on in a woman's world in the 1600s? Hint: It starts with an "r" and ends with "ampant misogyny." The Christian Church was especially adamant to remind its followers that women were the reason humankind sinned and descended from the Garden of Eden. Chastity was enforced as strictly as "thou shalt not murder," and married women had to cover their hair. Upon marrying, obedience to the husband was mandatory.

Happily, there's sweet vengeance. After centuries of apple oppression, this fruit is finally on women's side.

Image: That's right—put your apple where your vagina is. Courtesy of Flickr.com