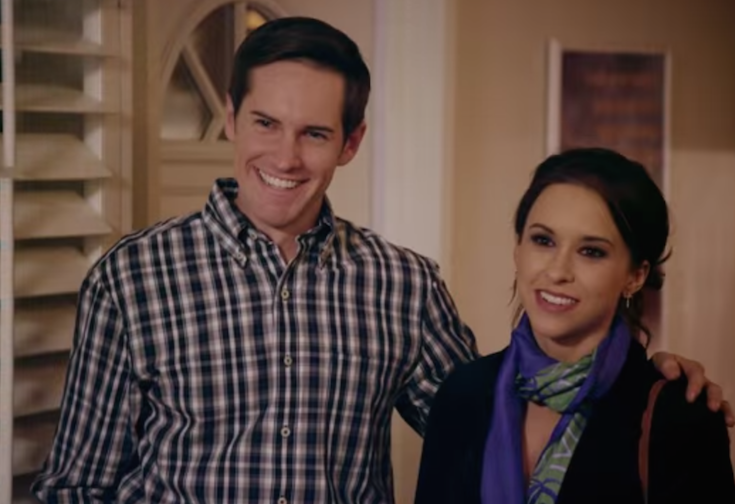 Holy Gruyère! Could this be the cheesiest romantic comedy of all time?

Just maybe. Christian Mingle, coming out in October, is—to my understanding—a completely real movie. Heroine Gwyneth (played by Lacey Chabert, best known as Gretchen Wieners from Mean Girls) lives a dream life in terms of monetary value, but completely lacks one thing. Can you guess what that is? If you rolled your eyes, you're right! It IS love! Gretchen Gwyneth decides to join the dating site ChristianMingle.com to meet someone special. Here's the kicker: She's not actually a Christian! Better drop that jaw, baby, because we have more surprises coming for you.

Gwyneth finds a guy that she really likes. Like any unscrupulous individual, she keeps up the dedicated Christian facade to make him fall for her. Because she's not 100% sociopathic, the lies can't last forever and the truth is revealed. Not surprisingly, the dude is angry that she's been lying. Suddenly, Gwyneth learns something: Her life is superficial. She then decides to devote her life to God and somehow finds love with a human man in the process. Soul searching. Triumph. Various emotions. Roll credits.

If I'm mocking this movie in August and it comes out in October, a complicated mathematical formula suggests that I should be crying into a wine bottle while watching it just in time for that beloved post-New Year's slump. Can't wait.

Given the decline of the non-secular's presence in our culture (Hobby Lobby ruling aside . . . ), is this a not-so-subtle message to the nation as a whole? The past 15 years has seen the sharpest drop in religious faith nationwide in the history of our country. The synopsis of the film reads like a glaring parallel reality. It's as if one last tentacle of the octopus of Christianity is clinging to whatever food sources drift its way. Pop culture might be its last bastion of hope.

Director Corbin Bernsen, though, insists this is decidedly not the case:

They (christianmingle.com) have been incredible partners and friends in allowing us to use their name and play an integral role in the film, but one of the first rumors I want you to help me dispel is that this is a commercial for them."

Despite the perhaps very Christian agenda, the trailer actually looked a helluva lot better than many romantic comedies . . . like, maybe even a little romantic?

Check it out for yourself and see what you think.