Sex, Love and Fur: When Your Dog Won't Let You Do It 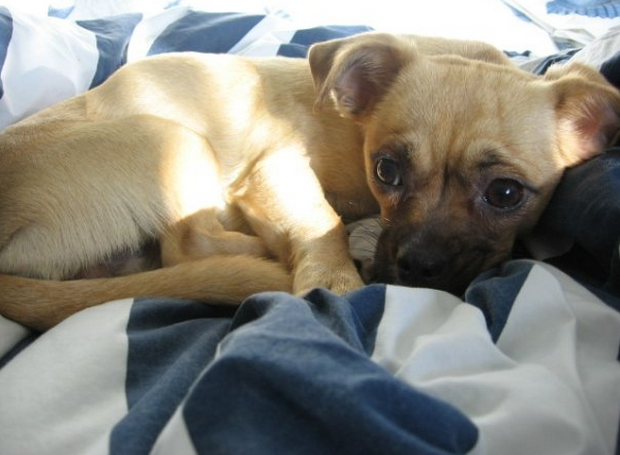 When it comes to relationships the figurative elephant in the room can be the literal elephant in the room, if you happen to have a pet elephant. But what do you when you can’t get it on because a pet keeps interrupting? While there are adorable videos online of pets interrupting yoga and other kinds of activities, pets interrupting sex is far less cute. Considering 62% of American households have pets, this is a problem that can affect many couples, myself included.

My boyfriend, Jay* has a 65-lb English Bulldog named Murray*, who is a very sweet, but high maintenance pup. He drools, he farts, he’s needy. He also doesn’t seem to understand that sex should be between two humans.

Whenever we get it on, Murray usually barks and interrupts us. This can be very frustrating. Most couples don’t buy their sex toys at Petco, but we do. We’ve had to invest in four-foot long bully sticks to distract Milo while we make out. (The irony that while Murray is enjoying a bull penis while I enjoy my boyfriend’s isn’t lost on me.)

Unfortunately, when it comes time for Jay and I to have sex, Murray's cute face and endless kisses aren't so cute. It’s hard to listen to the sweet nothings Jay whispers in my ear, over Murray’s loud barking. Sometimes the dog tries to get up on the bed, which we’ve let him do twice. Once I found myself needing to pet Murray while performing oral sex on my boyfriend. Another time? Murray licked my butt during intercourse. At that point, I had enough.

The Rescuers Who Need Their Own Rescuing

Over the years, Jillian and her husband have fostered 42 dogs from Sparky and The Gang, in addition to having two of their own pups. To keep their alpha status, Jillian and her husband don’t allow any dogs in the room when they have sex, but that doesn’t mean they aren’t interrupted. This poor couple is often subjected to four sets of paws clawing at the door to get in or even worse, the rescues who often have cones on their heads from surgery, loudly dragging them, scratching on the hardwood floors.

And it’s not just sex that gets interrupted. It’s hard to get some shuteye with their own high-maintenance pups. Peanut, who is a rat terrier, snores and has a loud hacking cough in her sleep, which Jillian claims “rivals Dorothy Parker’s.” Hulk, their aptly named Italian Greyhound, wakes up at 4:30am every day to pee and sometimes, even poops in the bed.

Experts say it’s bad to let a dog sleep with you, not only for sanitary reasons, but because it can interrupt your precious shut-eye. However, according to a CDC study, between 14-62 percent of pet owners sleep with their cats and dogs, so it’s safe to assume a large group of people, including all of the couples in this story, are willing to take the risk.

It’s not only dogs that, well, act like dogs. Ben and his girlfriend live together along with her cat, Zeus. Believing he is the king of all cats, Zeus, tries to exercise his power by attacking Ben’s crown jewel. He also pounces on moving things under the blanket. Ben says, “Zeus hates feeling left out. We used to ignore him, but now it’s door shut.”

When researching this article, I was most shocked to find out just how little information about this problem was available. Expert answers to nearly every common problem can be found on the Internet, but apparently even Caesar Millan is too much of a prude to tackle this issue. I only found two experts willing to explain why our animals interrupt us having sex.

In a podcast, dog trainer Jolanta Benal tells listeners that when our pets interrupt us during sex, they may be seeking attention because when we’re having sex, we’re not paying attention to them. Duh. But, there's a possible poultice: giving your pet extra attention before you need private time may prevent this problem.

Sometimes sexual interruption can reflect a larger issue, which is guarding behavior. For some pets, guarding their owners is no different than guarding food or toys.

So, what’s the real solution to this problem? There isn’t too much you can do. Sex educator and dog trainer, Sassafras Lowrey suggests if your pet likes his or her crate, then crate time is the new sexy time.

Benal also suggested distracting pets with a “food-dispensing toy,” which is exactly what Jay and I do. Perhaps the only way to get naughty without getting interrupted is to buy your sex toys at Petco.

* At the request of the witness pup-tection program, these names have been changed.

If you like this article, please share it! Your clicks keep us alive!
Tags
Sex
pets
Relationships
amanda lauren
Petco
pet problems
dogs