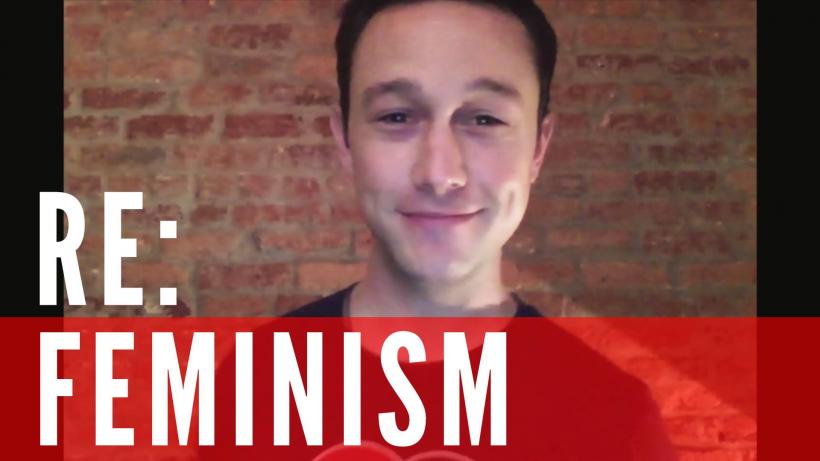 I've already stated my all-encompassing love for Joseph Gordon-Levitt, so I feel zero qualms continuing with the trend: I love this man. I. love. him.

And while this is true on a daily basis, it's even more so of late. Why didn't I write any articles yesterday? I was watching this video. On repeat. For 14 hours straight (at least in my brain if not with my actual eyes).

What makes it so special? First, it has his face in it. Secondly, those dimples. And, thirdly, he's explicitly discussing his feminism again. The JGL Feminism Train has been chugging along for a gleefully long ride. There was of course his incredible work with Don Jon. Then he discussed feminism openly during his appearance on the Ellen DeGeneres Show in January. Which he followed up with the Daily Beast interview that, as I've mentioned, basically incapacitated me for a day, I was swooning so hard.

And he hasn't stopped! As he reiterated in this gemtastic video titled "Re: Feminism," his thoughts on the meaning of feminism are as such:

He went on to discuss the backlash he received for having expressed such views in his interviews (adding that he was kind of astounded by it—his incredulity that the group Women Against Feminism even exists is particularly amazing):

“There were some people that were saying that feminism made sense in the past but it doesn’t anymore because men and women are equal now. I’m not an expert but I think the facts are pretty contrary to this.”

He goes on to explain that in pouring through dissenting opinions, he turned up that a lot of people equate feminism with man-hating (is my love for JGL, a man, not more-than-palpable right now?) and that others don't identify with the label because they perceive it to be "somehow against motherhood."

“Personally, I don’t take it that way. For me as a feminist," (he says, emphasizing the word with a bit of adorable snark) "it should be up to the woman to decide if she wants to be a mom . . . if that’s what she wants to do full time, that’s awesome, that’s what my mom did. But if she wants to go out and have a career apart from being a mom, then she should be able to do that as well, and that’s to the benefit of everybody.”

Benefit to everybody. Yes, YES. And JGL isn't even done there. This video is his way to announce that his open-collaborative production company HITRECORD is collecting submissions from anyone and everyone on what feminism means to them—even those who disagree. He wants to hear it all.

So the JGL Feminism Train isn't even close to being done rolling. And I cannot be more on board with it. The more celebrities who bring momentum to the movement, the better.

And for all those idiotic cries of feminists being ugly trolls, please spend a few minutes gazing upon those dimples and reassess your life.

If you like this article, please share it! Your clicks keep us alive!
Tags
Joseph Gordon-Levitt
JGL
feminism
Re: Feminism
video
HitRecord
celebrities
Daily Beast
Women Against Feminism
motherhood
gender