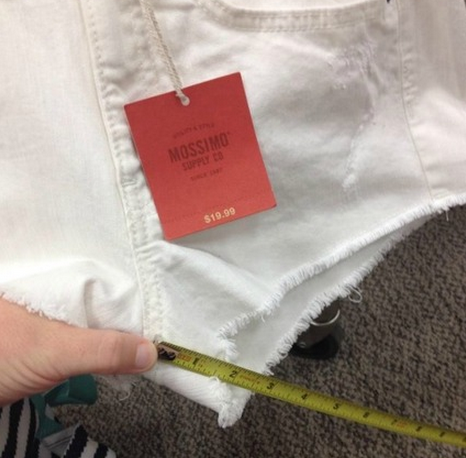 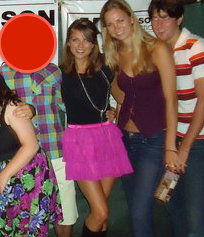 First a confession: I'm mildly obsessed with one of my "going out" skirts—with its tiered pink tulle, it encompasses that enviable combination of cute and sexy. I'm such a fan.

The problem is that I bought it at a children's store. And yes, at 5'7" I may offer decidedly more leg than a "kid" donning this item, I've been within two inches of this height since I was 12 (seriously, I texted my mom and asked her to check the marks on the wall in the garage to confirm). I think we can all agree that 12 is still technically still a child.

Anyway. A mother named Stephanie Giese recently dedicated a blog post to Target to air her complaints about their maybe barely-there kids clothes.

Amongst other criticisms and witticisms she asks:

"Why are you offering my kindergartner clothes that are sized for children less than half her age?"

"I took this picture last summer, when I was irritated because the crotch was the longest part of every single pair of shorts offered in the toddler section of your store."

So what else did Giese detail? Let's start with some good news:

2. Target actually rocks at appealing to a spectrum of personalities amongst little girls. Glittery pink products are available, but so are Ninja Turtle shirts. Not to be outdone, the boys' section also showcases Frozen gear. And, to Target's credit, Giese was quick to note that it's competitor Kohl's was significantly worse (more glitter, less fabric).

And now, onto the icky parts!

Like my ultra short skirt, Target too apparently thinks that fabric is, IDK, "out" for elementary school fashion. Giese compared brands, sizes, gender designated clothes and found some maybe not-so-surprising things. Overall, girls' clothes were consistently more form fitting than boys'. Girl shirts even contained a dip at the waist—you know, as if an eight year old has a figure to "show off" or speak of.

Pants? Again, cutesy little flared jeans for girls were all ultra tight and noticeably smaller than their boy size counterparts. Girl shorts were always way shorter. When comparing sizes, Giese found that only a "girls' large" equated the inseam length of a boys' XS.

I mean, really now? In the junior's department, Giese found size seven shorts with a two-inch inseam. (That's about half a index finger length away from their crotch.) Knowing that girls' bodies mature faster than boys', it's not unlikely to see a girl as young as 12 wearing this size.

Giese's main concerns were mostly practical, but the not-so-latent over sexualization of underage girls sits red-hot at the crosshairs of this issue as well. She pondered:

"Can my daughter sit 'criss cross applesauce' on the reading rug? Does it meet the finger tip length dress code rule? Are those too tight for her to button herself after using the bathroom? What do I tell grandma when she asks what sizes the kids are wearing now so that she can start Christmas shopping? And the obvious, is my daughter too exposed? We prefer to keep our private parts private around here, thank you very much."

Little girls aren't out dancing on Friday nights in the hopes of luring men closer to their loins . . . but when you offer clothes ostensibly designed to show off more skin, the impetus here becomes confusing.

And even if said parents did reject said clothes ... all the other girls at school would be wearing them anyway. The pressure to fit in and be "normal" is too strong amongst youngsters (who are, realistically, still developing their personalities) to demand that they deviate from what's deemed socially acceptable.

Dressing girls in skin-tight, too-short clothing will inevitably attract unwanted attention from older men. And yes, while I agree that this is the men's problem, young girls don't have the mental tools to combat this attention efficiently. It's just not fair.

At least Target has expressed concern?