Why I Left The Mormon Church 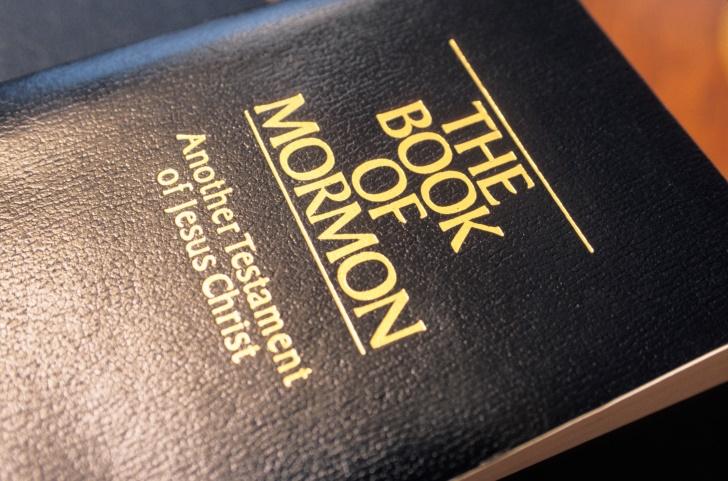 Let me tell you the story of how I committed the most grave act of social suicide imaginable.

As a child, I spent a fair amount of time with my great-grandmother. Whenever my mom was out (which was a lot), she acted as my maternal figure, baking cookies, checking that I did my homework, and teaching me how to identify weeds from wildflowers, how to crochet, how to sew on a button, how to live on my own.

She was the kind of devout Southern Baptist who knows every written hymn and can summon a Bible verse applicable to any situation. Jealousy? There's a verse for that. Laziness? There's a verse for that, too. She prayed over me in unintelligible tongues when I had a wicked case of pneumonia. And, when I was six, she made me memorize the Lord's Prayer. I can still recite it in full, despite the fact that I've never actually had occasion to use it.

When I asked her if God was real, she would answer with something like, "How do you think you got here, missy?" I trusted her; she was the only person I really could trust. So it was a number of years before I questioned her faith. My faith. It was so steadfast, so unfailing. How dare I doubt it?

No one was thrilled when, at 18, I married my high school sweetheart. But she was never more disappointed in me than when, three months later, I entered the wrong waters of Baptism.

I was, after years of religionless wandering, a Mormon.

How that came to be is less important than the fact that is just was. Mormon missionaries are a well dressed, smooth-talking, persuasive bunch of (mostly, in that day) men. They've been taught how to answer every question, refute every claim, defend every seemingly questionable commandment. They sold me. I was all in. Love. Acceptance. Family. Structure. Control. Rules. The only (female) child of an alcoholic's dream, really.

They write books about people like me. People who have survived such a childhood as mine, so desperate for love, so in need of order that they'll grab on to anything, anyone. My family (excluding my dad, stepdad and sister) were so disappointed that I sold myself short in a doomed-to-fail teen marriage that I was essentially black-sheeped right out of the holiday table. You want to be stupid? Go ahead. But don't waste our time with that nonsense.

My in-laws, though? They welcomed me with open arms. They were Mormon, too, and it all just made sense. Mormonism is kind of like an exclusive club; you don't get the juicy stuff until you're in. And once you're in, you're in forever (or at least until they kick you out).

I wanted to be in.

The Church provided me with something I had been lacking. Shortly after I was baptized I bore my testimony: a Mormon tradition of standing in front of the congregation, declaring your love for the Gospel, telling a room of other Mormons (and prospective converts) how the Church made your life complete. It was all very Jerry Maguire. I won't say I was acting, because I believed what I said—even if it did sound contrived.

During the many days I questioned my faith—I was a scientist at heart, with a nasty habit of seeking proof—I still professed an abounding love for the Church. Not its policies, political stances, not even its leaders, but its people. At a time when my own family wasn't available to me, my church family was solid, steady, stable.

It went on this way for a lot of years. Fifteen, to be exact. In that time, (now ex) husband and I were temple married—that is, married in a sacred secret ceremony that only other qualified Mormons can attend. I bore three children and began raising a Mormon family. My then-husband and I both held various respected offices in the church, as presidents and leaders. And in true type A, overachiever, eldest-daughter-of-an-alcoholic fashion, I gave it my all. Tying quilts. Making soups. Teaching crafts. Singing in choir. Trading babysitting duties. Speaking in sacrament on Christmas.

As I'm typing these words now they seem distant, surreal, imagined even. Did that happen? Now, on the other side of being a Mormon, the person I was seems like a stranger. I know she existed, but I barely remember her. She's an idea more than an actual person.

But I know it happened. Because I was there. Until, that is, I wasn't.

In 2008, California was in a bitter political battle against "gay" marriage. You may remember it as Prop 8. I remember it as the Prop that pushed me over the edge. I'm not gay, but that doesn't matter; what matters is that I believe in equality.

For the most part, I kept quiet about this stance—but only for a time. Both the Catholic and Mormon churches were quite outspoken at this time about any "non-traditional" marriage. The church made an official stance on the proposition and said that would be that. But that wasn't it at all. Driving about town I would see people I knew, my friends, on street corners, holding signs boldly stating their stance.

Always with the exclamation points. People I knew and loved picketing, donating thousands of dollars to the "cause" through the church.

And then there was an argument over the presidential election. I was, and am, a liberal feminist, a rather non-conventional position among women of the Church. At a church-sanctioned activity someone noticed my Obama bumper sticker, and macho misogyny was unleashed.

I was told that I was stupid. That feminism is man hate. That abortion is murder. That Obama would ruin the country. Ruin it! If I had initiated a political debate, maybe I would have felt different. But what I felt was isolated, frightened, insulted. Standing in a parking lot, I looked up and found myself surrounded by six or so men challenging my deeply held moral beliefs. My (then) husband was nowhere to be seen, and he wouldn't have defended me if he were.

And then I thought, "What in the fuck am I doing here?" So without any fanfare I left, and decided I wasn't going back. Ever.

Here's the thing about leaving the Mormon church that anyone who has ever left it will tell you: It is absolute social suicide. My doctor. My veterinarian. Dentist. Insurance guy. Nurses. All my friends. Virtually all my kids' friends. All. Mormon. And Mormon isn't a thing you just stop being. It's not the kind of church you attend at Christmas and Easter. Leaving the church is leaving family. It's fundamentally saying goodbye to your life.

Suddenly, not only did I have a three-hour block free on Sunday, but also on Tuesday, Wednesday, Thursday, Friday, even Saturday. I was free to stop giving 100%, to stop trying to explain evolution as godly, to stop referring to Joseph Smith with reverence, for fear of excommunication, shaming my family, and the ousting I ultimately brought upon myself. I was free to say I thought God, as a human-like being, as a creator, was in fact (dun dun dun) a sham. I was free to explore whatever spiritual avenue I desired.

What I didn't expect was being avoided in the grocery store, at a restaurant, at Target. The subject of whispered gossip. The cause of the demise of my eternal family. A marked woman. When my husband and I separated nine months after I left the church, the members we both knew rallied mostly around him. It was his family that brought me to the Church; it was I that broke the promises.

I was the one who found another man, another life. A real Hester Prynne. When the dust settled, they were still standing strong in their faith, circling the wagons, and I was alone. When I remarried there were a very limited number of people I could invite. I'd left the vast majority of my friends behind with my faith.

It's been six years since I walked out and never walked back in. Six years since I've sat through a three-hour block of doctrine, taken the sacrament, given a talk on Sunday that felt contrived, at best. There are a few Church people who I would still regard as friends, people who check in every now and then. I recognize this as a mostly not-at-all veiled attempt to bring me back to the fold; a good Mormon will never turn their back on an inactive. But I appreciate it still. I feel less like a leper . . . even though I know the whispers are still there.

I'm proofreading this as I sit in my (Mormon) doctor's office. He's a good doctor, and I'm sure he's still disappointed that I left. He'll say everyone misses me, that it's not the same without my vital spirit, my energy. He'll say his kids miss my kids. We always exchange niceties, then he treats whatever ails me and I thank him and go home, to a home much different than the one I knew before.

Also: marriage equality for California and everywhere. Maybe one vote doesn't matter. But my vote did.