If Dads Date Their Daughters, Are Moms Supposed To Be “Dating” Their Sons Too? 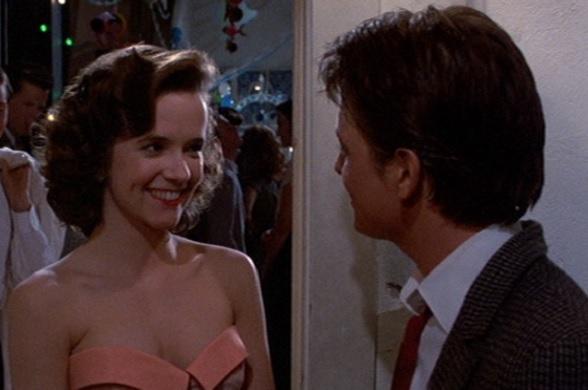 This isn't a popular opinion, but I'm not a fan of the term "daddy-daughter date." And I know that's not a popular opinion because I've written about my dislike of the term in the past and it's always attracted a lot of negative feedback. People feel like I'm arguing semantics, people feel like I'm making something sound romantic that was never supposed to be, people feel like I'm criticizing fathers for wanted to spend time with their daughters, which couldn't be further from the truth. Dads spending time with their daughters is a vitally important act—hanging out with my daughter is literally my favorite thing in the whole wide world. That said, when people defend the notion of "daddy-daughter dates," in my experience, their counter-arguments generally fall into one of two categories:

1. It's just a term for spending time together. Don't make it into something it's not.

2. I take her on dates to show her how she should be treated by the men in her life.

And, let's say, for sake of argument, that both of those statements are true. If that's the case, then why don't moms typically "date" their sons? Why do these "dates" seem to be a strictly father-daughter phenomenon?

In regards to category #1—"It's just a term"—I have occasionally heard of moms saying that they have a "date" with their sons. I don't think it's as common, but it does happen, although most "mom-son" dates I've encountered revolve around something fairly innocuous, like going to the Lego Store together or going to see a movie. While I know some fathers and daughters who have similarly average outings, I've also seen many, many "daddy-daughter dates" that involve the dad and daughter dressing up in their best and actually going on a "faux-date"—he brings her flowers, tells her she's beautiful, they go out to a fancy dinner, maybe dancing. In fact, they have whole "daddy-daughter dances" that are structured in the exact same format as high school dances.

And, maybe it's just me, but I've never encountered moms and sons "spending time together" in the same way. I don't know of any moms who get dressed up, bring their sons a boutonnière, and head out for a fancy night on the town. One can argue that girls might be inclined to enjoy this "fancy dress-up" more than boys might—although that's a pretty big generalization—but, regardless, I think it's pretty obvious that there are some pretty big differences, both in terms of perception and execution, when it comes to daddy-daughter dates and mommy-son dates. (One of those differences is that no one ever uses the term "mommy-son date.") It seems like mother-son time together revolves around hanging out, while people often feel the need to structure father-daughter time around the format and iconography of actual dating.

Now, let me cut you off here, I am NOT saying that there is anything romantic about father-daughter dates. I am 100% NOT saying that. There simply isn't anything romantic about them. However, daddy-daughter dates do often ape their structure from the kinds of dates that boys and girls might go on in high school, like a Homecoming date, or a fancy-dress night on the town with one's spouse. And mother-son "dates" don't generally use the same structure. And I'm curious why.

"It Shows Her How She Should Be Treated"

This leads into category #2 in defense of father-daughter dates—"I take her on dates to show her how she should be treated by the men in her life." Again, I am not here to argue whether that is a valid or invalid point, but I will note that I can't think of any time when those roles are traditionally flipped and mothers do something similar with their sons.

Can you think of a time when a mom takes her son out, they get dressed up, and she's trying to show her son how his future girlfriends should treat him later in life? I can't. What would that look like? Dad-daughter date advocates often say things like "I open doors, I tell her she's special, I bring flowers" to demonstrate how they're using the date structure to show their daughters how they should expect to be treated by other men. And it is a romantic date structure, because men don't usually bring flowers or go dancing when they're trying to express their respect for their aunts, female work friends or sisters.

So . . . placed in the same situations, what are moms supposed to do with their sons? What would a mother-son "date" look like? Do they have to adhere to social clichés? Do the moms need to let their sons open doors or pay for the meal? Are the moms supposed to listen intently, laugh at his jokes, and tell him that's he's handsome? (How far should we push the clichés? Should the mom just order salad?)

There's this thing in our society where it's socially acceptable for fathers to be held up as the "ideal men" for their daughters, but mothers aren't supposed to be the "perfect women" for their sons. If a boy ends up with a woman who's "just like his mother," that's generally perceived to be a bad or a weak thing.

Should more moms be role-playing like this? If we have fathers taking their daughters on admittedly innocent "dates" to teach them about how men should respect them, should mothers be doing the exact same thing? Should mothers be using dates with their sons to prepare them for their future relationships?

Personally, I feel like the answer is "No," but that's just my opinion.

I think parents spending time with their kids and showing their children respect is unfathomably important. But I've always been confused about why dads and daughters structure that time around "dates"—role-playing lessons in opposite-gender respect—while the same expectation apparently doesn't exist between mothers and sons. And, this is important to note, this all assumes that the family is a heterosexual, 1950s nuclear family. What if the family has one son and two gay dads? Or one daughter and two lesbian moms? If there's no dad, should the moms be taking the daughter out and showing her how to be respected at a fancy dinner and a formal dance? If there's no mom, should the dads be doing the same thing with their son?

Again, this has nothing to do with romance or sexuality. But, for some reason, we have decided that father-daughter time should involve an element of role-play—role-play that's undeniably based on the tropes of modern dating—and mother-son time should not. And I think that's odd.

I do think that I'd be more accepting of the daddy-daughter date role-playing if society placed just as much value on mothers and sons doing exactly the same thing. But it doesn't. And I find that disparity both troubling and telling. (Don't even get me started on the "Purity Balls" where daughters "pledge" their virginity and "purity" to their fathers. Can anyone show me any example of an institution where sons pledge their "purity" to their mothers? If it exists, I'd love to see it.)

Ultimately, there are many, many ways to impart respect and love to your children. I have a powerful paternal love for my daughter, but, if she ever needs instruction on how she should be treated by a loved one in the future, I'm confident that all she'd need to do is see how I treat my wife or how our friends and family treat their significant others and those lessons would become apparent.

My question stands—should mothers be "dating" their sons? Should we have mother-son dances in the same way that we have daddy-daughter dances? And, if not, why? I'd love to hear your input because I have yet to hear an explanation that truly makes sense to me.

This story first appeared at The Good Men Project.

If you like this article, please share it! Your clicks keep us alive!
Tags
parenting
daddy-daughter dates
analysis
critique
moms
mothers
fathers
dads

If Dads Date Their Daughters, Are Moms Supposed To Be “Dating” Their Sons Too?
Tom Burns