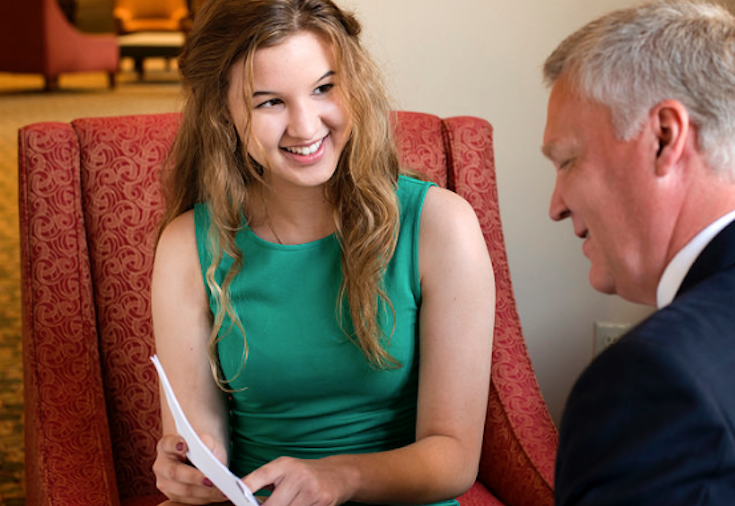 Last night, the GOP annihilated the Senate. Conservatives cheered. Liberals wept quietly into empty bottles of Pliny the Elder (or was that just me?). In the midst of all the hoopla, an interesting conservative was elected in West Virginia: 18 year-old Saira Blair, daughter of Senator Craig Blair.

Politically, she's fiercely right wing. Blair is endorsed by the NRA, is staunchly anti-abortion, ridiculously opposed to gay marriage, demands voters to show ID . . . I could go on, but you get the idea. Blair is also a freshmen at West Virginia University, and did most of her campaigning for her seat in the WV House of Delegates literally out of her dorm. Not only that, but she donated $4,000 to her own campaign to demonstrate her sincerity. Clearly it worked; Blair bested seasoned Layne Diehl—who at age 44 is (2x + 8) her senior—63% to 30% (a third party got the remaining 7%).

Diehl, like any good politician, was quick to say she was "proud" of the way the election ran. "Quite frankly," Diehl explained, "a 17 or 18 year-old young woman that has put herself out there and won a political campaign has certainly brought some positive press to the state. I look forward to seeing what her leadership brings to the state of West Virginia.”

Ladies, regardless of your political affiliation, this is huge for feminism. Though her views (especially on abortion) aren't consistent with (what many consider to be) feminist progression, feminism is all about having the choice to believe and do whatever you want. Not only did a young woman win this race, but her biggest rival was also a woman. Can you believe it? Yeah, Blair's father's influence likely helped—but this could still be the beginning of a remarkable career.

Let's take a quick peek at history to see just how far women have come—and just how huge this moment is—shall we?

1887: Kansas bestowed voting rights to women in citywide elections. Shortly after, America saw its first female mayor: Susanna M. Salter. She presided over the town of Argonia. Though she was initially nominated as a joke, Salter won 2/3 the vote and went on to live to be 101.

June 4, 1919: Women won the right to vote in federal elections (19th Amendment). See that? Less than a century ago, women couldn't even vote. I know people who were alive when this was the case. Just think, in their lifetime women have gone from fighting to vote (and wear pants) to competing against each other for political office.

November 21, 1922: Just three years after women were granted federal voting rights, a woman named Rebecca Felton was elected Senator of Georgia . . . briefly. Prior to that, Felton's husband was a politician who served three terms in the U.S. Congress. Felton helped her husband with his speeches and wrote newspaper articles on his behalf (on par with running his campaign today). After her husband died, Felton's writing gained more press (though, not necessarily good: she was incredibly racist) and Felton stepped in to Senator shoes when an incumbent died. That is, for a 24 whole hours. So close, ladies!

January 5, 1925: The first female governor, Nellie Tayloe Ross, was elected to preside over Wyoming. Though she wasn't nominated on a lark like Salter, Ross was elected after the incumbent—her husband, William Bradford Ross—died. In 1933, former President Franklin D. Roosevelt appointed Ross Director of U.S. Mint. This was just 89 years ago.

December 9, 1931: Now we get a woman to the senate for more than 24 hours, yay! Hattie Wyatt Caraway initially gained political knowledge through her husband's career. Thaddeus (Caraway's hubs) made his first run for Arkansas Senate in 1920, and Caraway worked diligently behind the scenes. She even earned credit for his election. When Thaddeus died, Governor Harvey Parnell—knowing Caraway's abilities—appointed Caraway to fill the position "on her own merit." Caraway went on to win a special election a year later, and continued to rock that Senator position for 14 years.

See a pattern? Early women politicians gained political access through their husbands, then proved themselves on their own merits. Today, Blair may have gotten a leg up from Papa Blair—but, she also may represent a new wave of young female politicians making waves. Do I wish that Blair were a Democrat? Selfishly, yes. Yet, historical context makes me appreciate Blair's win. In the lifetime of our grandmothers and great-grandmothers, women have made amazing strides in the political sphere.