Don Lemon, Victim Blaming And The Myth Of The Singular Rape Experience 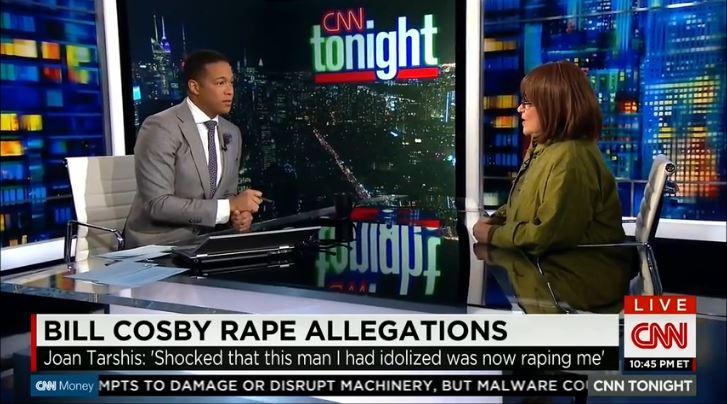 Much has been written about Bill Cosby and the egregious ways media—and society writ large—have failed his many victims (I refuse, intentionally, to write “alleged” before using the term victim; the odds of now 15 women lying about being assaulted given the horrific treatment survivors face in coming forward publicly—even when the accused is just a civilian and not "America's Favorite Dad"—I feel more-than justifies this choice). Indeed, just yesterday I was in the office while my charming and incisive coworker Nikki published a piece on the less-than-charming and not-at-all incisive Howard Kurtz and his noxious, irrational nonsense on Bill Cosby. I even chipped in to help brainstorm a title as my blood boiled. Bound together in our stunned rage over his offensiveness, the Ravishly team landed at "Fox News Stretches Bounds Of Reason To Explain Anger Toward Cosby."

OK, I thought. Fox News and its steady stream of outrageousness probably can't be topped. But then . . . oh, then . . . CNN's Don Lemon opened his mouth. In an interview with former publicist Joan Tarshis, who claimed Cosby assaulted her twice in 1969—when she was just 19 years old—the "journalist" had the asinine audacity to say, on TV in front of millions of people: “You know, there are ways not to perform oral sex if you didn’t want to do it.” He even needled her further, involving Tarshis in a conversation about the apparently overlooked merits of biting during an oral sexual assault—and somehow, inconceivably, chasing it all with a "I had to ask."

So here we are again. Wrestling with the ever-present issues of media and society and rape culture and victim blaming.

The Power Of Victim Blaming

As a society we seem to be constantly struggling to acknowledge and recognize the notion of victim blaming. Well, for those who need their 9384023480239th example to finally grasp the term, please look no further than Don Lemon’s needling a rape victim about her thought process during her drugged violation—on national television.

You may dislike the term “rape culture” but here's one of mainstream media’s highest-profile anchors literally asking a rape survivor why it didn’t occur to her to bite her rapist’s penis—and notice how he's continuing to serve in said high-profile position.

You also may dislike the usage of “trigger warnings,” but I guarantee Lemon’s agonizing interrogation—on CNN—of a rape victim’s thought process while she was being assaulted has triggered countless survivors and rendered them dissociative or in the throes of a panic attack.

Don Lemon’s behavior is inexcusable. It is unthinkable. This can't be denied even if we take into account his dubious journalistic record. It is well-established—even, profoundly understated—to say that Don Lemon, tends to, quite often, fumble—nay, totally drop—the ball of journalistic responsibility. In addition to frequent displays of outright duncery (i.e., his not knowing what an automatic weapon is), his tendency to blame the community for a whole host of issues has been documented time and again—whether through Horatio Alger-esque lectures or positing that black Americans are responsible for Justin Bieber’s racism.

Among his innumerable flaws, as Rahiel Tesfamariam aptly identified in a Washington Post piece:

“Lemon’s individualized “pick yourself up by your bootstrap” resolution to systemic injustice has historically been used by conservatives seeking to absolve themselves of America’s responsibility to the poor and disenfranchised.”

My point? He is often a bumbling, offensive and triggering figure. And his high profile does much, and repeated damage (as is the case with countless in the mainstream media).

Do I think Lemon is competent and should have such a prominent position? No. Do I think he should lose his job? Yes—which is neither a new or unique view.

He is, however inconvenient for stark good vs. bad narratives, a fellow survivor.

Don Lemon And The Notion Of "Knowing Better"

I'll concede that on its head, it doesn't make much sense—that somehow the man who prodded a rape victim about her abuse on live television has a book called Transparent to his name, in which he detailed his childhood of sexual abuse. That somehow today's face of victim shaming is that of a man who penned an op-ed titled "No matter the gender, rape is rape," using his own experiences to complicate our society's harmfully simplistic and unbalanced notions of sexual assault in the wake of the Jerry Sandusky scandal.

By highlighting his personal experiences, Lemon called out gendered stigmas of sexual assault, bringing ever-needed complexity to our society's notions of sexual violence:

As a survivor of childhood sex abuse, please listen to me: We must stop turning a deaf ear to this issue. If you don’t open your ears and minds because of my plea, do it for the eight little boys whose manhood was shaped early on by, quite possibly, a monster."

Allow me to highlight a point Lemon himself has made: Our society’s dealings with rape are flawed and widely destructive for huge swaths of our population. Given how unfair—how downright willfully ignorant and cruel—our society treats survivors, it’s imperative to make a concerted effort to not engage with any more protracted victim blaming. Any calls that Lemon “should” know better certainly hold water, so far as they speak to him as a journalist abusing his platform—indeed, we should all know better.

But castigating him for not knowing better because he is a survivor is, in and of itself, a form of victim blaming.

I'll not excuse Lemon's words yesterday—but nor will I indict him on the grounds of being a victim. To do so would elide the critical analysis that our culture so desperately needs. To do so would suggest that rape is a blanket sort of violence.

But there is no singular experience of sexual assault.

And we cannot continue to cast survivors in huge, sweeping strokes. To do so dehumanizes those who’ve suffered some of the worst kinds of violations, ignoring their individual pain.

In a fair, ideal world, Don Lemon would not be one of the main faces of a major news network. But in an even more ideal world, we’d recognize the inherent grayness of how we are abused and assaulted—which would contribute to the realization of the most ideal world: one in which rape does not exist.