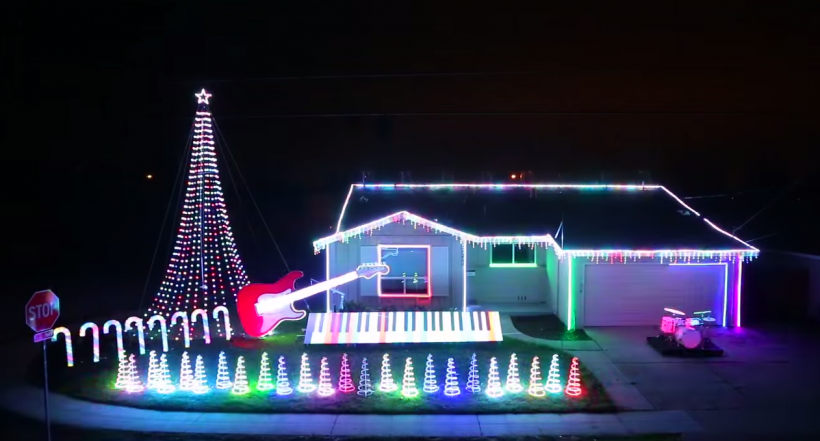 Not so long ago (this morning), in a galaxy not-so-far away (this one), I wrote a piece about how I’m not feeling the holidays this year . . . OK, more accurately I wrote a piece that spelled out in detail the mental manipulations I’m engaging in to pretend the holiday season doesn’t exist at all. Because it’s a tough time of the year for me, profoundly lacking in jolliness, so I’ve just been compartmentalizing such that I have an armor that no seasonal cheer can penetrate. Basically, yes, I am the Dark Side personified—but at least I am readily conceding it.

“Yeah, despite its issues, it used melt me, too,” I said. “But I’ve since turned to stone. So, you know, I’m incapable of melting.”

But then. Oh then. The unthinkable happened.

And it’s all due to Bay Area music teacher Tom BetGeorge and his absolutely stunning Star Wars Christmas display. You’re going to have to see it to believe it (I find it’s best consumed on repeat 4-56 times, but I leave it to you) because it’s actually that striking (including a fucking rooftop light saber duel):

You probably weren’t counting because you were drooling in a stupor trying to absorb all the magnificence, but there were around 100,000 choreographed lights—hooked up with 5,000 wires—that accompany a selection from John Williams’s brilliant score. BetGeorge, who—and rightfully so—has gone super viral with this, said he spent around 1,000 hours working on this light show, constructing the decorations from scratch.

“To make the timing match, I have to do tons of trial and error,” BetGeorge said. Um, I literally cannot imagine. But I bet George Lucas (see what I did there? Am I the only one to make this pun!?) is impressed.

What makes the display’s existence even better is its impetus. Because it can be expensive for families to take children on holiday vacations to places like Disneyland (Oh look! Another reason to be anti-holidays/turn to the Dark Side), the music teacher wanted to give people something free to do this season. Barring rain, you can catch the display at Lafayette Avenue and Ruschin Drive in Newark, California, most nights from 6-10 pm. (Sidebar: who’s the jackass that just flew to NYC? This guy.). He’s even collecting tips and donating them to Centerville Free Dining, a program that doles out meals and provides counseling services for the homeless and underserved.

Does the fact that I would—merrily, in fact—board the Millennium Falcon to return to California to see it (even with the knowledge that "traveling through hyperspace ain't like dustin' crops, boy!") discredit my Dark Side anti-holiday stance? Is it I "who [is] mistaken . . . about a great many things?" I don't think so. Because my main issue with the holidays is how they are foisted upon us all by society, regardless of how we feel about them. A Star Wars Christmas, because of my deep and abiding love of that galaxy a long time ago and far, far away, is very much on my terms.

That said, this tiny, BetGeorge-catalyzed splinter in my anti-holiday stance does prove a point a great green being once made: "Luminous beings are we, not this crude matter."

Maybe more melting is in store.