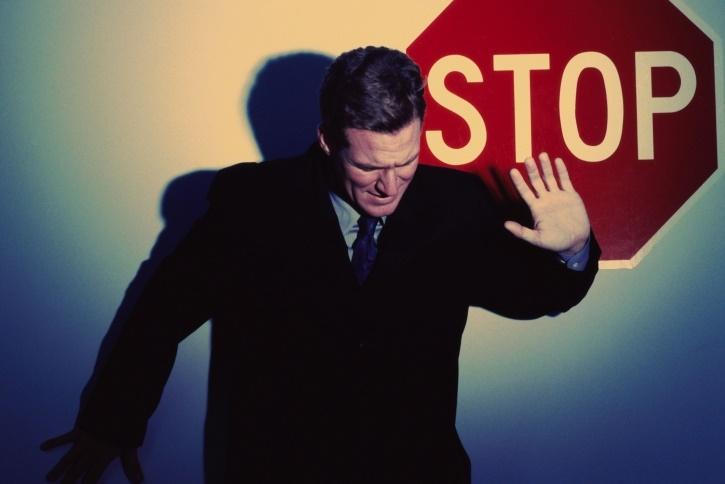 I wish to be very old and wrinkly when I stop having sex. Like, so old my IV drip of Viagra doesn't work anymore, my poor lumbar discs simple can't handle the thrusting and my lungs seize up at all that panting. That kind of old. Then I'll just plop my ass into the La-Z-Boy and Jim Beam myself into the grave.

But that's not the kind of cessation of sexual activity I wish to write about here.

I remember all too well being a young, lust-filled virgin. And like virgins often do, I spent a lot of my free time reading science fiction. (A hobby I still pursue.) As a pre-lay lad, I was reading a book by one of my favorite authors when I came upon a scene of coitus interruptus; a man was happily banging away with a willing partner when for reasons not germane to this article, he was forced to stop at the proverbial moment of truth.

After reading that scene, I felt confused. I had imagined that stopping voluntarily once sex had begun simply wasn't possible for a man. Granted, I was only about 15 at the time, so what the hell did I know? Answer: not too damn much.

You hear and read stories. These are not nice stories. These are stories about two willing partners happily performing the most awesome of activities (or even just leading up to it), but then something happens and one partner wants to stop and the other partner does not comply with said wishes and it's a very bad thing.

Life is not like Temple of Doom, and you're not Indiana Jones. When she wants to get away you can't crack your whip and reel her back, expecting her to be grateful.

Let's get this straight: People have the right to cease and desist sexual activity at the beginning, middle, or end of it. And it's a right that must be honored, no matter what. There is no such thing as a "point of no return" in fornication. No matter how "close" you are, how good it feels, or that they were just blissing out and screaming your name just moments before.

Moreover, it doesn't matter what the reason is. It could be because of sudden hip pain, a cramp, a catching of one's breath, a simple "your breath stinks," an "I don't like that," the troubling "I suddenly decided I don't like you," or the classic, "I just changed my mind about this and why is none of your damn business so just stop right now."

Here is the thing you need to understand. You ready? It's only fun if everyone involved is having fun. The whole time. (I threw in that "everyone" part to include orgiastic scenarios.) This is the way you need to train yourself to think, just in case you don't already. This is critical to a consensual, happy sex life where everyone ends up feeling good.

What this boils down to is simple. The time to stop having sex is when the person you're doing it with tells you to stop. Now, before the libertarians get their knickers twisted and make it seem like you have to get a notarized declaration of permission to enter the premises before each and every thrust, that's not at all what I'm saying. I'm saying that if someone tells you to stop, or gives you an otherwise identifiable signal that they want you to stop, then that's what you do.

But why James? Is it against the sacred unspoken sex-code to keep going? I mean, I'm almost there. What's 30 more seconds, right?

Yeah, no. Depending on what level of backwater misogynistic shit-hole you live in, in most places it is against the law to keep going after your partner tells you to stop. Yes, even if you’re married. Unfortunately, even in the most civilized of places it's hard to convict people for even the most egregious of sexual assaults, so the legal ramifications of not pulling out when asked to during (once) consensual sex are rarely enforced.

But just because you can get away with something doesn't mean you should do it.

By continuing on—yes even for 30 seconds—you are participating in an act of sexual violation. There's no way around it; no justification can be made. Conversely, here's a hypothetical situation that may or may not have happened to someone during the act of sex:

Person 1: "You've tensed up. Is something wrong?"

Person 1: "Of course it's OK. I want this to be fun for both of us. Let's cuddle instead."

Person 2: Feels like Person 1 is pretty damn awesome and trustworthy. I'd like to give this several more dates. And roll-arounds.

Having to finish doesn't make you a man. But having mutual respect and self-control certainly does.

If you like this article, please share it! Your clicks keep us alive!
Tags
consent
consensual sex
Rape
misogyny
blue balls
pulling out
stop when someone tells you to stop