I'm A Feminist Who's Flattered By Catcalling 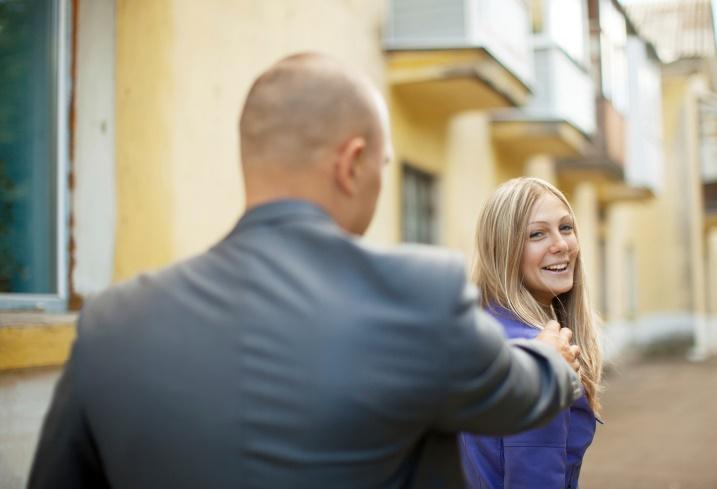 I often recall fondly the time a man yelled something unabashedly racist and sexist at me as I sauntered down the street. It happened a good nine years ago, when I was still in college. But to this day, the words feel fresh.

My sheepishness was palpable as I giggled and responded, "Why thank you."

As someone who's grappled with body-image issues, the words were particularly powerful. Maybe, I thought, I'm not fat—but curvy. Maybe my big ass is actually hot. I knew his words were steeped in dehumanizing racist stereotyping and sexual objectification, but in that moment, I simply felt desirable. And that felt good. (Let me acknowledge here that, of course, as a cisgender white woman, my experiences with street harassment are much less fraught and violent than they are for other populations of women, like trans women or women of color. I also know I've been very fortunate in that the harassment I've personally experienced has rarely had threatening undertones.)

It wasn't the only time I've been flattered by street harassment—I've even happily obliged men who've asked me that most offensive of questions: Can you smile, pretty girl?—and it might not even be the last. Indeed, my affinity for catcalls has yet to dim, even as I've become more committed to women's rights issues and more inundated in stories about harassment.

When I watched that viral-smash video of a woman being catcalled 108 times in a day, my first thought wasn't "How terrible and sexist!" but "Wow, she must be really pretty; there's no way I'd get catcalled that often in a day." I felt an acute desire to measure my own value as an object of sexual desire against hers: Was it her bigger boobs that made her so alluring? Her thick curly hair? Her superior fashion sense?

When other writers and friends similarly lament all the times they've been street harassed, I can't help but wonder exactly how many times—and how those numbers compare to my own.

It's not lost on me that in admitting to being complimented by catcalling—to coveting it, even—I am making myself the woman harassers use to defend their actions. To them, I must seem like someone who appreciates the catcalls that they perceive to be the sincere compliments they are, unlike those callous bitches who don't know a nice thing when they hear it.

As more stories about catcalling become a part of the national discourse, and justifiable outrage mounts, I feel increasingly guilty about reacting to harassment with a gratitude that would seem to vindicate the act itself. What kind of feminist must I be if I'm an examplar for an ideology at odds with the fundamental feminist principle that street harassment dehumanizes women? That it's an expression of male power that serves to reinforce the idea that women exist as things to please men?

But . . . what if this guilt is misplaced? Or more precisely, what if it can be instructive?

Rather than simply casting myself as a "bad feminist" and moving on, the question of why I react to the male gaze—in its unwarranted streetside remark incarnation—with appreciativeness rather than reflexive revulsion should be interrogated. And inevitably, this leads me to reflect on (what else?) the very societal system I live in.

In the last 24 hours alone, I've watched a heavily made-up former beauty queen on The Real Housewives of Beverly Hills remark that one can never be too thin, then taken in the visual spectacle of J. Lo and Iggy Azalea shaking their perfect, glistening asses in the music video for "Booty." These experiences are, of course, the result of arguably poor decisions I've made. But even if I read nothing but Erica Jong and bell hooks and had a Spotify list made up entirely of Ani DiFranco and Fiona Apple, I still wouldn't be able to avoid the songs on the radio about good girls who want it, or newsstand magazine covers flaunting Kate Upton's glorious rack, or the strategic advertising of a $56+ billion cosmetic industry built around the idea that I should be skinny and smooth with hair that never tangles and armpits that never smell—an ideal that, on capitalistic purpose, can never possibly be lived up to; a game intentionally stacked against me, one that I can never win.

In the context of this daily social conditioning, my positive reaction to catcalling doesn't seem so much weird. In fact, it makes sense. In a culture holding that a woman's worth is tied up in her aesthetic qualities, men telling me—however problematically—that I turn them on, in the twisted ways of our society, affirms me in a small way.

Acknowleding this, however, inspires me—from here on out—not to feel guilty on account of my catcalling gratitude, but to challenge the whole damn system. Every time I reflect back fondly on the man who "complimented" my curves and ass, I promise to remember that the feminist movement still has a long way to go.