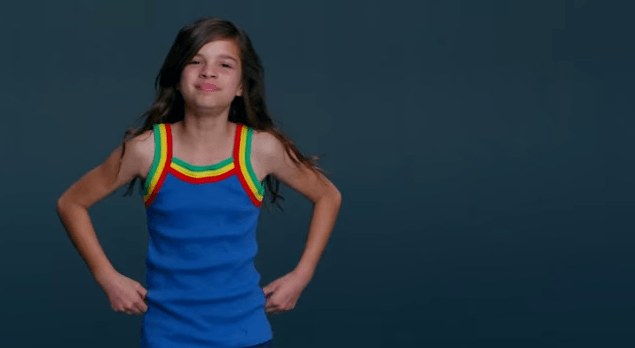 When I heard that maxi-pads company Always would have a commercial at the Super Bowl, my first thought was, Okay, yeah, let's do this thing. Let's talk about periods during the Big Game. Let's pour some hot-blue liquid all over some glorified diapers and make neo-feminist waves.

Part of me was—admittedly—desiring the perverse pleasure of imagining millions of people's rapt attention and beer-soaked elation collapse into wincing grimaces of dawning horror (not unlike Richard Sherman when he saw that Malcolm Butler had intercepted the ball) as a vaginas-bleed commercial sullied their set. As a quick and dirty Quora-sourced estimate, 334 million women are on their period on any given Sunday (see what I did there?), so why not just look all that uteral shedding in the face and talk about it, right?!

Because this is the most-watched television program of all time—literally—Always couldn't just hawk maxi pads. Oh no. It couldn't even show one. Or mention what the hell it makes. In this ad about period pads, there was to be no talk of periods at all, or of what comes out of that dark, dankish hole when a woman isn't pregnant.

Instead, the ad team gathered their well-coiffed heads together—they even invited some of their female counterparts!—and decided they were going to ride this whole "feminist" thing that seemed to be happening.

But since the NFL commercials were already all over the women's rights thing—the NFL deftly tackled the issue of domestic abuse, Mindy Kaling talked about being a women of color, Sarah Silverman "openly attacked men"—they wondered . . . what can we get in on?

Ahh, why not an oldie but a goodie: The much-loved and much-maligned pejorative witticism, Like A Girl.

Brief recap. The director asks a group of teenagers, including two boys, to run, fight, and throw like a girl. All proceed to portray the act in the most stereotypically, over-the-top "girly" way possible; thrashing limbs, swinging hips. She then asks a group of procociously young girls—all aged around ten—armed with preternatural sass and self-possession to do the same. And they run, fight, and throw with zero gendered pretense.

The emotional kicker, set to soaring strings, is designed to hit home: "Join us to champion girls' confidence."

While I'll admit that this ad was accessible—in that there's a certain familiarity to the scenarios depicted of adolescents running and hitting "like a girl," mincing about with noodle arms and running in a broken-legged fashion—it didn't do much except highlight our society's casual and sanctioned sexism.

And in truth, I'm not even sure it did that.

I believe that was the ad team's thesis, that it was their pitch and campaign strategy, but damn, was it anemic. Damn was it strangely deceitful.

Between the faux-documentary style shooting (am I honestly supposed to believe all those kids did that unscripted?) to the attempts at warming my heart on the pre-pubescence coals of sassy girls uttering, "Running like a girl means as fast as you can"  . . . I felt angry. Manipulated. Annoyed that this would be called progress. That this commercial would be championed as a genuine attempt at fostering a dialogue about the crisis of female youth in America.

Because #hittinglikeagirl and #runninglikeagirl are the least of our problems, people. In no particular order in a blitz of sorrow and confusion, here are some, more poignant issues that we could be addressing among female youth:

Sexual Assault/ Rape:
• According to a study by the CDC and the Department of Justice, 60% of the 8,000 women who participated in just one study and reported being raped were under 18 years old.

This isn't about "doing what we can" and this shouldn't be about "something is better than nothing"; it's about distracting everybody from the real issues at hand. Now, 50 bagillion people think they've helped fight the good fight and are "aware" of what our youth is up against. They can tell themselves, "I've never thought about it like that before."

The Washington Post explained today that, "The most sophisticated gender politics in this year’s slate of Super Bowl ads came from companies selling insurance and feminine hygiene products . . ." But wow, that isn't saying much.

And while I (of course) agree with the capitalistic/cynical mash-up that NYMag writer Ann Friedman takes:

"This isn’t companies waking up to feminism. It’s companies getting real about the fact that 46 percent of Super Bowl viewers are women, and pseudo-feminist ads grab their attention a lot better than traditional beer-commercial fare. Women also out-tweet men. 'Ads with female appeal = best return on $4 million price-tag,' wrote Kat Gordon at Adweek. That’s not merely because of women’s long-touted buying power. Women are more active on social media than men, and a heartfelt 'experiment' in girls’ self-image or a loving shout-out to fatherhood is going to get a lot more of their tweets and Facebook shares than a woman eating a cheeseburger in a bikini."

But this obvious insight just adds to my ire. Great, thanks for trying to cash in on the struggle. Thanks for commandeering, re-appropriating, and cash-cowing what some of us believe is a grave civil rights issue.

Maybe tackling such issues is a bit much for a maxi pad company to tackle. Maybe it's not an "appropriate" venue to talk about such things. So maybe Always, and companies like it with their faux feminist ads, just shouldn't do it.

Maybe instead pad companies should feel no shame in pouring blue liquid into cotton towels, while we shit-kick over here. And never the twain shall meet.