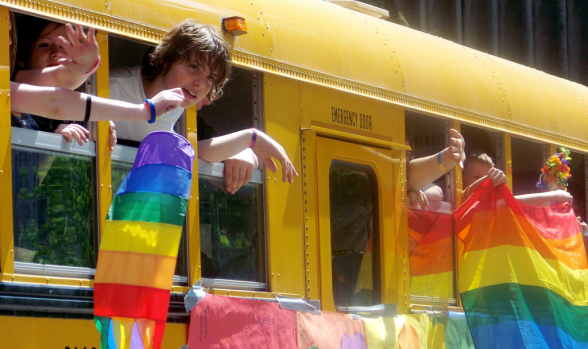 Until about a year ago, I hadn’t thought much about what it means to be the parent of a gay child. I joke with people that while I am a gay parent, both of my children are straight and I’m not sure what I did wrong to make them that way.

It was when a friend discovered that her child is gay and contacted me that I first began to ponder what it must be like to be in a straight parent’s role. I watched my friend walk through the process of acceptance and heroically assume the role of protector and fierce supporter of her child, yet we both knew there was another hurdle to climb. Her child attended a staunchly conservative Christian school.

As fear and misinformation about sexuality and gender pass through the churches, it’s only natural that it lands in the hands of Christian school administrators and teachers. Sadly, the LGBT youth find themselves subjected to it in their homes, churches, and schools. One of the school’s teachers where my friend’s daughter attended told my friend (with a straight face) how the Nazis were used to spread homosexuality throughout Europe. She cringed at the thought of what her daughter had heard all of those years at that particular school.

Recently, 17-year-old Austin Wallace was asked by his Christian school principal to go back into the closet, or leave the school. The New Civil Rights reported Wallace as saying, “I feel like you should be able to have Christian beliefs and still feel like everybody belongs . . . I go there to express my faith. I am a Christian and I love my God, and I don’t feel this is what He would want. I don’t feel like excluding someone for who they are is anything Christian, I feel like it’s the opposite.”

But school officials don’t feel that way at all. In fact, in a climate where the political right has positioned LGBT equality as a direct attack on religious liberties, LGBT youth continue to be demonized and self-acceptance is viewed as rebellion against God, school leadership and, indeed, nature itself.

The problem is far more than a difference of opinion; it’s a matter of perception on several fronts. The perceptions, again mostly proliferated by large conservative religious organizations, put already at risk kids at even higher risk. There are three main misperceptions I see in each of these cases.

1. Homosexuality Is Only About Sex

There were many hurdles I had to get over as I walked out of my conservative Christian beliefs and self-hatred, into self-acceptance, and ultimately the acceptance of others. The idea that gay people are all about sex, while straight people are all about family and relationships was one of those hurdles.

As soon as someone identifies as gay or lesbian in the conservative church, there is a quick leap to sexual activity in the mind of the listener. One man recently wrote me to say that after several years of church leadership and building what felt like family relationships in his church, his confession of mere same-sex attraction ended everything. Instantly. He was jobless, homeless, and churchless. He had never so much as even talked to another gay person before his confession.

The words gay, lesbian, homosexual, bisexual, and even transgender are frequently synonymous with the word sex in the minds of many conservative Christians. Sex frequently preoccupies the minds of many conservative Christians, whether they are on guard against it, fear the immorality of it, or live in shame because of it. Whatever the reason, those who are uncomfortable with their own sexuality cannot possibly address, let alone be comfortable with, the sexuality of others.

I am still baffled by the idea that lying about one’s sexual orientation or gender identity is better than the truth, but that’s how many conservative Christians prefer it. Last week I shared the story of Dr. H Adam Ackley, who said, “I thought my community [of fellow Christian scholars] would be happy [upon hearing of my self-acceptance], but it was pretty hard to get the message that we preferred you insane and dying than healthy.”

As a Christian, I learned to live with the inconsistencies of the Bible and internalize my fundamentalist beliefs as ultimate truth. Anything that didn’t fit within my beliefs was wrong. I suppressed my own sexuality for decades because it didn’t line up with my faith. To question my beliefs was to question God Himself. Therefore, I was wrong and He was right, but only as I understood Him, and by extension the Bible, to be true.

If it’s that difficult for a gay or transgender person to come to terms with who they are, it is nearly impossible for someone who has never dealt with sexual or gender identity to understand what it’s like. Certainly, there are other inconsistencies that heterosexual Christians face, but until the cognitive dissonance is unresolvable, and signs of physical and mental breakdown emerge, they will continue to uphold their version of truth and apply it to all people and all situations. It is inconceivable that what they believe, and the way they believe it, is wrong.

To continue the facade of pure Christian faith, personal truth must be suppressed. That goes for anything that doesn’t neatly fit within a fundamentalist category, such as rigid gender types. This type of dishonesty isn’t only a religious phenomenon, but can also be seen wherever there are strong ideals within a group. The ideal becomes the idol.

3. The Bible Is Clear About Sexuality And Relationships

Naturally, nearly all of the controversy around sexuality and gender is based on a fundamentalist interpretation of the Bible, and those of us raised in conservative Christianity often believed what we were taught. Again, unless there is a reason to question our beliefs, we seldom research the information we have been told. When we do, it is usually research from within our own group of believers. This is the psychological phenomenon of groupthink, where members of the group only reinforce what they group already believes to be true. With no outside contribution, the thoughts, beliefs and doctrines of the group are never challenged and the group begins to believe that they have all truth and the only truth. This type of thinking kills secular organizations, but causes religious organizations to thrive.

I decided early on, as an LGBT advocate, to never talk about the Bible and Scriptures. It is an endless, unwinnable argument among the religious faithful who believe their version of the Bible is true and everyone else is misguided, deceived, or just wrong.

The Bible most certainly is not clear about sexuality and relationships, since Biblical marriage has continued to morph from a man and his property, to a man and his property and her servants, and/or his slaves. The New Testament does not mention homosexuality (a word that did not emerge until the latter part of the 19th century), but is crystal clear on divorce. The Bible and its interpretations have evolved, and continue to do so based on culture, since its inception. (For more, see Why I Don’t Talk About Scriptures.)

While these three misperceptions are certainly not just relevant to LGBT kids in Christian schools, the kids are the ones who often take the full brunt of the anti-LGBT rhetoric. However, there are organizations available for parents and schools to help better understand the mind of LGBT youth and it’s just a matter of choosing to learn. After all, that’s really what our kids want to do, too.

If you like this article, please share it! Your clicks keep us alive!
Tags
lgbt youth
LGBTQ
christian fundamentalism
christianity
religion