Inside My Whirlwind Life As A High-Profile "Fat" Woman 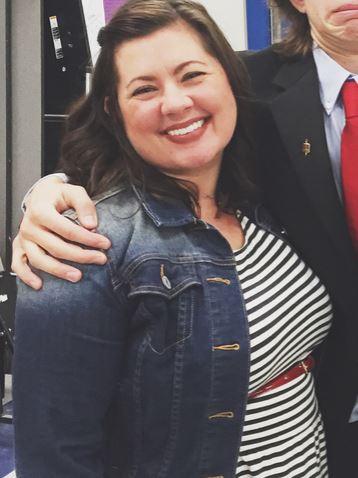 Hi. Maybe you've seen me around. I wrote "Being Thin Didn't Make Me Happy, But Being 'Fat' Does"—just a little thing about me being happy, despite being fat. I thought it would be a little article, just another in a long line of "little" articles I've penned and will continue to pen (or type, as it were). What got me to the keyboard was basically the emotional lovechild of Tess Munster and my self esteem. That's usually how my writing goes; something gets me either fired up or bummed out, and my brain sort of vomits into my computer.

Huffington Post picked it up for their blog section, as they sometimes do. And then their front page section, which they rarely do. And then Yahoo tossed it up on their front page (which I only know because someone sent me a screenshot of it). Truth be told, I didn't even know they still had a front page. Turns out they do and it's apparently read by a number of people.

It seems like one of the people who reads Yahoo's front page is the Chicago Tribune, because they called me next. I had a lovely, if completely unexpected, conversation with Heidi Stevens who wanted to write a column about the article and me. Which was flattering, and a little weird.

The Daily Mail picked it up, because I guess they read either Huff, Yahoo, or The Tribune. I wish I could recall who told me the Daily Mail ran it but I can't because in the last two weeks I've forgotten pretty much everything but my family and this article.

The next day, which I'm pretty sure was a Friday, because I was on my way to my sons' band competition, 20/20 emailed. Monday they called me and we talked about setting up my appearance on their show. Good Morning America and 20/20 are both on ABC, but evidently they don't actually communicate with each other because GMA called me and had no idea that I was going to be on 20/20. While in discussion with GMA I was also being courted by The Today Show (and by courted, I mean asked . . . there is no money changing hands here. Ever.). GMA wanted me to give them exclusivity, i.e., say I wouldn't share the story with anyone else.

I'm 40 years only and had only been on television once, and that was because I was selling lemonade on a particularly hot day. Sadly, lemonade sales did not increase, as the next day was significantly cooler, and also my neighbor Robbie, who was the brains behind the deal, had Boy Scouts.

Not that I wouldn't have said yes to exclusivity, because why do I care? It's not as if I had an extensive list of television appearances to make (. . . yet). As it turned out, GMA had overbooked themselves. So the producer wished me luck and off I went to The Today Show. Quite literally. It was 9 am PST when The Today Show producer told me they wanted me on THE NEXT MORNING. This is how TV works, folks.

Before 10, there was a camera crew (consisting of one nice guy named John) at the house to film me "being normal" (I didn't have the heart to tell him "normal" at 9:30 am is yoga pants and a second cup of coffee). This set into motion a chain of events that can only be described as frantic. A. I had to do my hair and B. I had to find actual pants. And C. my daughter Kelsey had to vacuum. By 11, I was out the door, lugging the suitcase that my dear friend and daughter had packed (i.e., shoved full of stuff) for me. I really had nothing television-appropriate to wear, and as such, on the way to the airport I ran through Macy's women's department like a gazelle, while my daughter ran to shoes and my friend Staci ran to intimates (because obviously I need pantyhose and some sort of shaper thing to keep my stomach from spilling out over my pants; I'm fat—not stupid.).

I made the flight, but barely. Because on the way to the gate, my local ABC news thought, "hey let's just meet her at the airport" to do an interview. Right there. In front of the giant fake sequoia trees—12:30 pm and 45 minutes from my flying magically through the sky all the way to New York. I'm good on my feet but at this point it hadn't even occurred to me that the only people who knew I was going are Matt (husband), Lindsey (neighbor who grabbed my little kids to avoid them being dragged through Macy's), Staci (professional bag packer), and Kelsey (who basically Mario Andretti'ed me to the airport). I have not told any of my other children or my father (who will ultimately find out by seeing me on the news. Oops.)

At 12 am I landed, and was transported via Fancy Car to my hotel, conveniently located across from Rockefeller plaza. The bellhop tossed luggage in room and I scrambled to find some clothier open until 2 am because I realized . . . I had no belt.

I have a coat, it's vintage 1960s swing-style wool. It's the only coat I have, because, California. It has 3/4 sleeves, which I guess were all the rage in the 1960s, though I'm going to venture to guess they also wore elbow length gloves then. In the absence of aforementioned elbow length gloves, in fact with no gloves, I was in NYC on a day that would be one of the coldest in history.

It was 1 am. I had not eaten. I had to be on set by 7. And I was walking to find a Forever 21, in the coldest weather I'd ever been in, with scarcely more than a pitiful excuse for a coat. No gloves. No hat. No scarf. Also apparently, no sanity. I bought a gyro and a Coke from a street vendor. The gyro was acceptable but I never got to drink the Coke because as soon as I cracked the top it exploded all over me like an atom bomb of frozen carbonated sugar. I can no longer call my coat useless though, because it was pretty effective as a napkin.

Good news: Forever 21 located at Time Square. Bad news: All belts too small. In an act of genius (not mine, but Staci's) I ended up sewing two tiny belts together (thankfully I came with yarn and needles) to make one fat girl size belt.

I did The Today Show, and after that spent 45 minutes talking to Inside Edition. If you're confused, imagine how I felt. Inside Edition is nice, small, and they took me to a lovely lunch at The Liberty, which actually was less an act of kindness and more an act of "let's film her eating." But still kind. I was treated like a celeb (HA) and posed for photos with the staff (double HA). I, sadly, did not see Deborah Norville except via a gigantic photograph. By the time I got back to my hotel, it was 2 pm EST. I'd slept 2 hours and my coat was STILL soaked in from Coke. I hadn't even looked at my phone or checked my email. Which turned out to be an act of self preservation because when I did finally look at my phone, it had essentially exploded.

I'm going to just stop here and tell you the next week and a half looked pretty much exactly like those first few days. Only, add in a bunch of print stuff, and substitute any one of four other shows in place of The Today Show and Inside Edition. Weekend Sunrise Australia (filmed via satellite in San Francisco). Canada AM. The Rachael Ray Show (which airs this Thursday). AOL.com. Redbook magazine. Parenting.com. Something called farrahgray.com. Buzzfeed. Brigitte magazine in Germany. This Fox affiliate. This ABC affiliate. This paper in Georgia. This paper in Iceland (oh how I wish I spoke Icelandic). This and this and this and this blog (actually not sure what that last one is). A multi-page feature in a magazine as yet to be disclosed. Two phone interviews with Sirius. This radio station in Toledo (don't tell them I don't like country music). And apparently a mention on The Talk. And a bunch of other Google results that I won't bore you with because if you clicked on even a quarter of the previous mentions you are so so sick of my face.

They almost all say the same thing (though a few do say I'm a loon).

I've flown more in the last two weeks than in the last 20 years. I bought a new Macbook air at 11pm on Thursday night at the 24-hour Apple store on 5th Ave (because our Macbook Pro broke, two days before I left, obviously) and a new iPhone the following Monday (because of a tragic store incident involving a freshly waxed floor and my ass, which resulted in my phone being full of said wax. Don't worry, Walgreens is paying for the phone). Four people have stopped me on the street—or in a bagel shop because New York—to say I've inspired them. In the interest of full disclosure I did tell them that I own more yoga pants than pretty much any person I know. Three literary agents have called me. A number of websites have asked if I'm doing more freelancing. My oldest son wants me to speak to his AP English class. One of my other son's friends asked me to speak to her Girl Scout troop (hopefully there are cookies involved). My two and four year-olds wants to know if we can go to the park. And if yes, when.

I'm incredibly humbled to have been able to share this message of happiness, love, and acceptance to what is, allegedly, millions of people (?). And I'll seize every chance I have to share it. Because it's valuable and important, and I think people are ready to hear it.

I have a literary agent now and my inbox is still full of messages from people who want to talk to/interview/call/feature/confuse/criticize me.

Also I have six loads of laundry to fold. And I need to go to Costco because we are out of both chicken and coffee.