Baku Baku Baby: A Life Growing Up In Azerbaijan 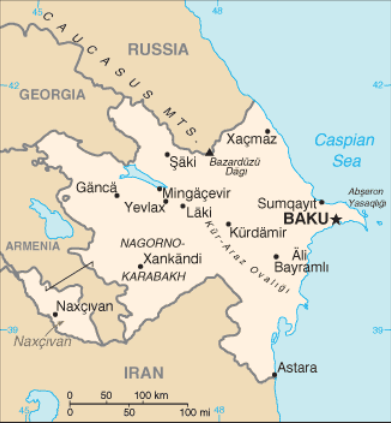 My uncles Yasha and Chanukah are sitting around the apartment in their white briefs as usual. Uncle Yasha waits until one of the two balconies gained some shade and takes his smokes and his newspaper out there to catch a breeze. Uncle Chanukah goes to his little eight-by-ten room to watch a small black and white television set and fan himself with his newspaper.

The apartment is in a two story pre-war building built on top of a post office on a busy four-lane boulevard flanked by giant maple trees in the center of Baku. The wrought iron doors next to the post office lead into our dark granite entryway lit by a single bulb and covered in hammocks of spider webs climbing the exposed brick. The thirty or so stone steps going up to the main apartment door are the only cold objects in the whole house besides our tiny fridge. They make scraping noises as our slippers climb the sandy stairs coming in from haggling at the bazaar or picking out new dresses to sell.

The small dark kitchen is to the right as you enter the house, raised way up by six steep steps. Each step has a hinge that lifts up and functions as storage for root vegetables and matzoni, a home-made yogurt my granny makes with her own culture. Granny also uses her kitchen as the place to spy on our Armenian neighbors. We share a tiny window, called phortochka, through which granny casually listens in, but will show me how to employ a cupping jar against the frosted glass when closed.

The wall-to-wall tiled mustard-colored shower with a drain hole is to the side of the kitchen and has a giant gas boiler heater with a pilot light that is always going out. A few weeks before, when I wanted to wash off the stink of not being asked to bathe for a while, I tried to light the boiler myself. I turned the gas on and struggled to find a match that wasn’t damp. I stuck my whole arm inside the boiler, and got the shock of my hand and forearm engulfed in a red sleeve of fire that stung for days. The burnt off hair smelled the same way that chicken feet did when granny held them over an open flame, the skin bubbling and cracking off.

With only a minor burn and singed off hair, I lied on my belly, straddling the edge of the couch with a basin of water on the floor and my arm resting in it, reading The Three Musketeers and dozing. If the adults asked me why I had my arm in the water, I would refuse to answer and they walked away shaking their heads. I cherished and was frightened of my autonomy when I saw that I could overcome real danger on my own.

I sleep on that couch by the eight-foot windows and my granny sleeps on the couch across the room that is separated by a huge mahogany dining table. At dusk, I lie there, facing my uncle Chanukah’s library and putting myself to sleep reading the floor to ceiling titles on the shelves he built over the years of collecting the classics. There is a whole other row of books behind the ones visible on first glance. If you pull out Master and Margherita, you might find Grimm’s Fairytales, or Farsi comedic hero Mullah Nasr dinand his adventures of trying to become a respectable, rich and famous, self-made man, behind the obvious stack.

My uncles each have a room of their own to which no girl or woman is welcome. Even though they both work—Yasha as the union leader at a construction gig, and Chanukah as an engineer—granny is the main breadwinner. Since there are only two bedrooms and Anna failed to marry off her boys properly, she’s reduced to sleeping with me in the high-ceilinged living room. Her couch has a red Persian rug. My couch has a crinkly piece of plastic with a white sheet over it that is mine to take to the washboard and galvanized tub in the shower, wash out and hang out to dry on the clothesline in the courtyard in the blazing hot shame of the morning sun.

The courtyard has an elderly man selling newspapers, rooster-shaped lollipops and freshly roasted sunflower seeds in newspaper cones out of a little kiosk, called lavochka. Fig and pomegranate trees are ignored and rarely picked in public because they are considered communal property, and it seems greedy to take anything for yourself in front of other people.

When I’m not working with my granny either because she stayed home to do chores or leaves me behind to gain speed in her routine, I take turns bugging my uncles. If uncle Yasha dead ends his conversation with me and sends me off to ask Chanukah for a book to read instead, I will steal a cigarette from his pack when he isn’t not looking, which is practically the whole time I ask him questions.

“Why do you have such curly hair?”

“Because that’s the best kind of hair. Why do you have such straight hair?” he asks back.

“My mom has straight hair, that’s why.”

“Well, you don’t look like her otherwise, thank god. Now get out of here. I’ll take you to the park later.”

“Can I get in the fountain?”

“No, you will surely find a way to electrocute yourself on the fountain lights.”

“We can feed the pigeons our leftovers. You know grandma used to eat those like chickens during the war? Now go read a book or help in the kitchen.”

I hold the cigarette tightly in a fist. I have been stashing them behind the china cabinet and haven’t yet had the courage to try one. I go onto the other balcony. It curves around the corner, out of view of my uncle’s balcony. I play another favorite game I made up in between reading Chanukah’s collection of books by Dumas. I got inspired by the way the Count of Monte Christo passed the time, etching each day into a stone wall, the numbers giving him gravity, imprisoned in a tower in the middle of a vast sea. I count cars by color. Red ones are very rare and white ones are the norm. I also count the fancy miniature versions of a Russian Limousine that transports people to weddings and funerals. A wedding car has a giant doll strapped to the hood with lace and ribbons going across like a present. As I’m up to my fourth red car, my grandmother grabs my arm.

“What is that note doing in your hand?” she barks, wide-eyed.

“I see a piece of paper poking out of your fist, now let me see it at once.”

I throw the cigarette toward the maples as hard as I can, hoping someone will pick it up for themselves before she sends me down there to fetch it.

“I know you’re out here passing notes to the KGB, or god knows what! I hear you counting all the time and now you’re passing notes. Tell me what you got yourself involved in. Is it those Armenian neighbors next door spying on us? The savages will be exterminated. I won’t allow you to be a spy on their side. Go fetch your note.”

If you like this article, please share it! Your clicks keep us alive!
Tags
Baku
eurasia
what is it like to grow up in eurasia
Azerbaijan
KGB
grandparents
Memoir
growing up