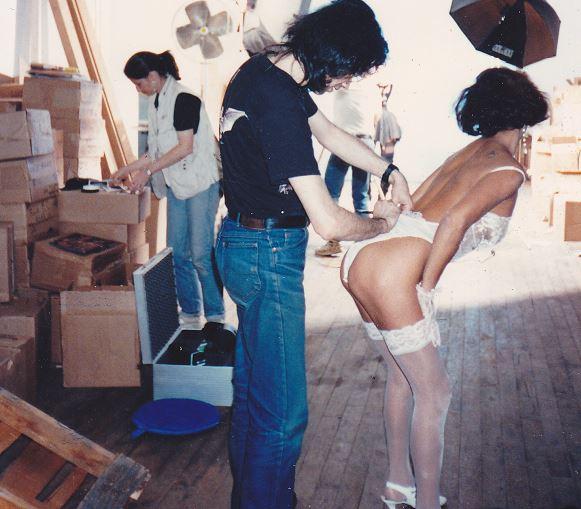 Behind the scenes of an Adventure Studios shoot, the cameraman helps a starlet into her negligee.

"Uh, Cat?" the director began, "We were wondering if you wouldn't mind holding onto Ginger so she won't slide across the stage . . . "

The answer: pretty much anything and everything, from dispensing the paper towels and handing over the Albolene mid-sex scene, to holding the c-light (the "c" stands for "crotch," by the way), to shopping for, prepping, and serving meals. 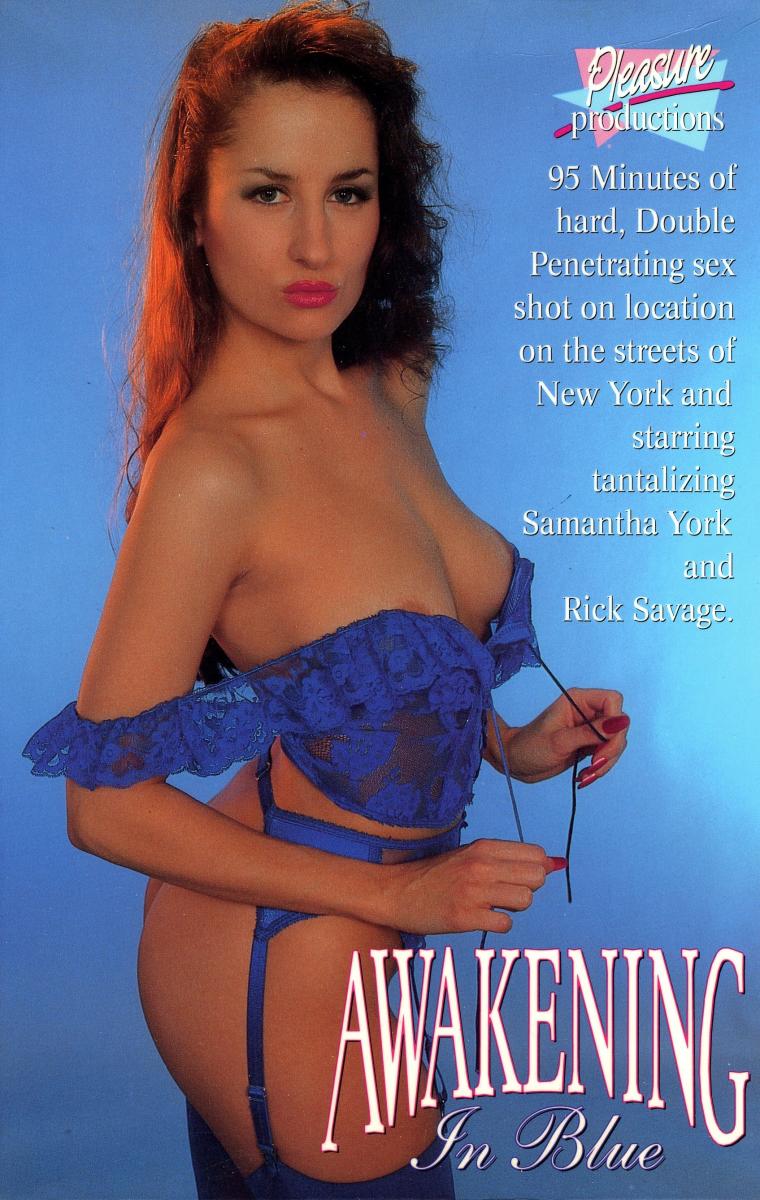 I've seen a lot of interesting things in dirty moviedom—actors yelling at their uncooperative semi-erections, actresses worried more about mussing up their makeup or picking up their kids from school on time than getting their partner to the finish line.

But one thing I've never seen is a fluffer. You know the fluffer myth—the tall-tale woman hired for the sole purpose of helping a performer get and keep "wood."

I must confess, though, that a few times I've been an inadvertent fluffer.

How is it possible to be a fluffer by accident? Often, it's just by being there. The pressure of getting an erection in front of a small crowd—cameramen, light guys, gaffers, photographers—then climaxing on cue is a daunting task. Sometimes it helps to have a friendly female face among the mostly male crew. Like a PA, for instance. And it doesn't hurt if that PA has dreamy brown eyes, a friendly disposition, and a heart-shaped butt.

The first time I realized I was a fluffer by default was during a gig at Adventure Studios in Corona, Queens, a stone's throw from (then) Shea Stadium. It's a big, convoluted warehousy space where the lion's share of New York City fleshflicks were shot. I was standing offset, watching well-endowed Damien Cashmere struggle with a bouncy, blonde starlet. It was the middle of the summer, and Hades hot. Cashmere was dripping sweat onto his ladylove, which she was none too happy about.

Next thing I knew, there was a gentle hand on my shoulder and a soft voice in my ear. It was my buddy Rick Savage, the director. "Cat," he cooed. "I don't know how to ask you this, but would you mind turning just a little bit so Damien can look at your ass during his scene? He thinks you're kind of cute."

A little taken aback and oddly honored, I angled my bod so Cashmere got a better view of my backfield. The scene went off without a hitch.

Rick was taking a chance with new meat. Traditionally, it's risky to hire a first-time stud without a proven track record of carnal coupling for the camera. They pop too soon, they can't perform at all . . . or they're instant stars. The pressure is intense, and Rick wanted to ensure that all went well for Ron, who was tall, buff, and handsome, the stuff wet dreams are made of.

En route to the studio from the hotel, we stopped at a McDonald's drive-through to pick up a protein-rich breakfast—only Ron was too excited to eat. Rick was concerned that without the fuel of the eggy weggs in a Big Breakfast, Ron might not be up for the job.

As Rick drove us to the set, I could see worry furrowing his brow. "How about I feed you?" I cooed to Ron. He turned around in the front seat, grinning, and opened his mouth wide in anticipation. I delicately fork-fed Ron so he'd be ready for his interracial double-cuntal—which is exactly what it sounds like. 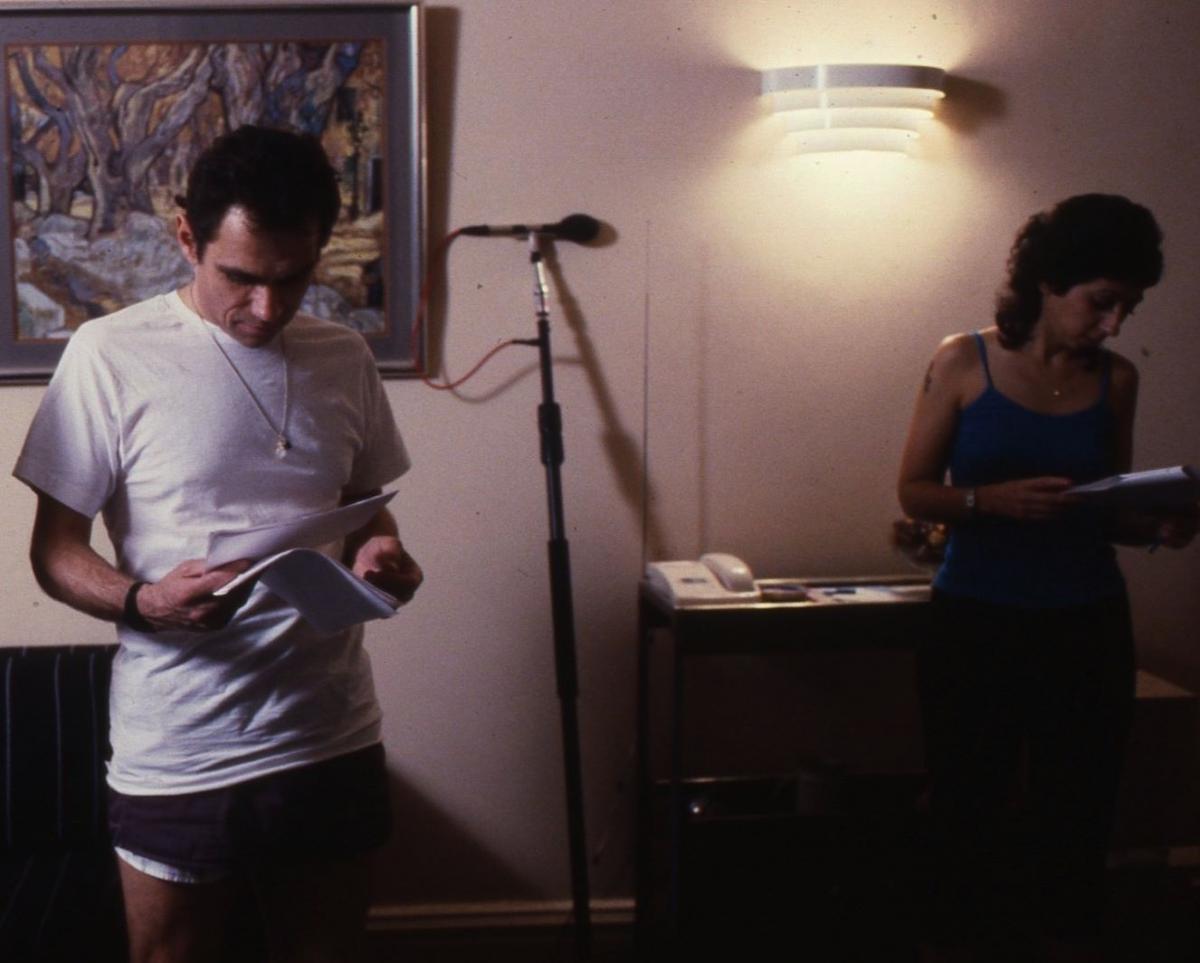 At the studio, cameraman TH and his crew had created a posh underground sex club, complete with a stage and rows of chairs surrounding it. The premise was that Rick's character, like Austin Powers, has lost his mojo. He happily rediscovers it as he watches the acts that mount the stage—and each other. Ginger Thomas—sleek, chestnut-haired, sensuous—welcomes both John (her real-life husband) and Ron into her abode.

Now, even under the best of circumstances (i.e. on a bed), a double-cuntal is a physically difficult feat. Some men are squeamish because their members actually rub against each another in, uh, tight quarters (i.e. Ginger). To make matters worse, this particular interaction would take place on a cold, hard stage. 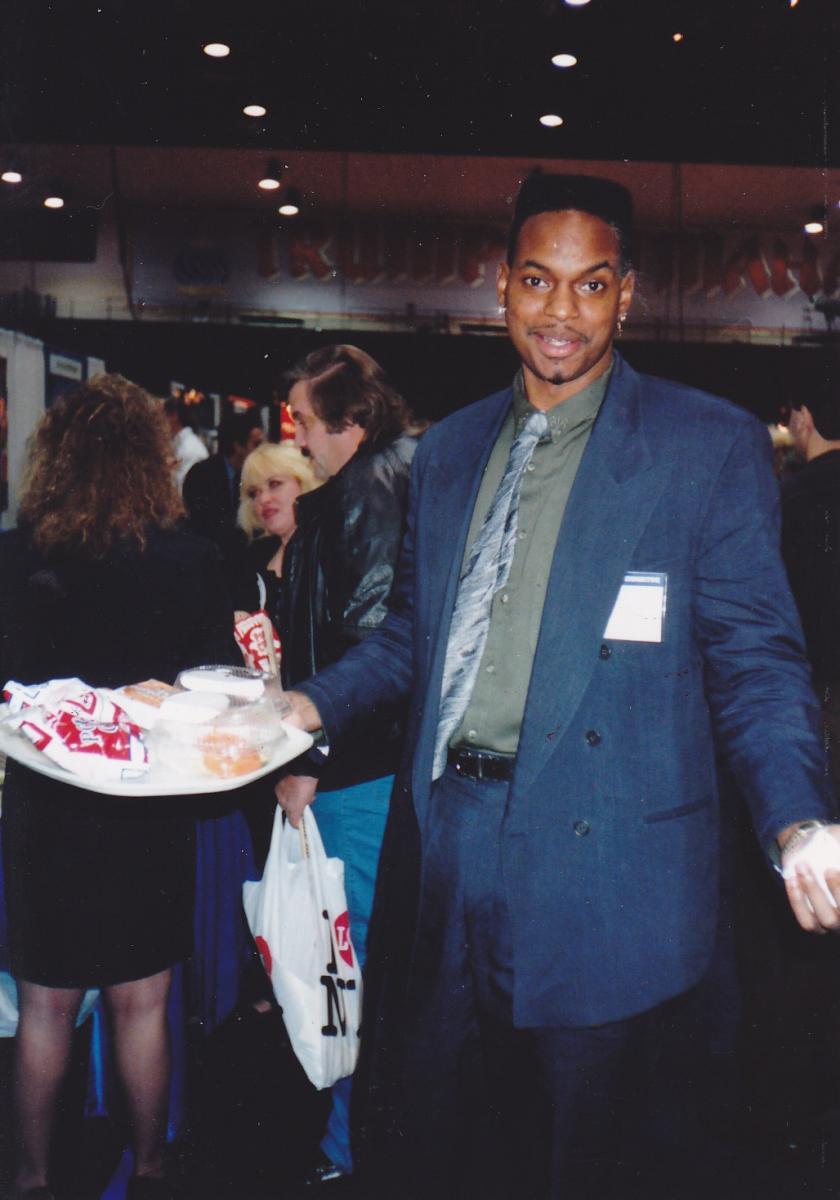 But all three parties were game and went at it with gusto. So much gusto, in fact, that the force of their ardor literally pushed Ginger across the floor; she had a nice burn on the base of her spine to prove it. But Ginger—and the boys—were incredibly turned on and aching to continue.

TH and Rick had a powwow to figure out how to remedy the situation. Again, Rick approached me with his smoky blue-green eyes, pleading. "Uh, Cat?" he began, "We were wondering if you wouldn't mind holding onto Ginger so she won't slide across the stage."

"Sure," I stammered, eager to be part of the annals (or is it anals?) of porn history. Or herstory. I firmly grasped Ginger's wrists out of camera range while she held onto mine. The men were up and in, thrusting away. Ginger gazing into my eyes, albeit upside down, was the portrait of passion. Literally sobbing with joy, she melted from orgasm to orgasm. I couldn't tell where one ended and the other began. It was raw, pure electricity. At one point, John looked into my face to gauge my reaction. I could feel their passion moving through Ginger's body into mine. It was so intense it almost felt like a four-way.

After the double pops, Savage christened Ginger's lovely visage. (Hurray! His mojo had returned!) The crew burst into spontaneous applause. It was a true thing of beauty.

I brought Ginger towels and water. She was still floating on a sea of lubricity, quivering from the intensity. Next, I handed the guys paper towels and water, and went about my PA duties, namely mopping up the sweat and other body fluids from the stage. Paige Pilar was due to do a solo sequence next, set to Erik Satie's lovely Gymnopédie No. 1.

Sometimes, a PA's job entails offering a kind word or a smile, or bringing in a home-cooked roasted chicken to the shoot by way of the "7" train. Other times, it involves a strategically placed posterior or helping hands. But way back when, I was a fluffer by fluke.

And proud of it.