I remained silent, after I was sexually harassed at work. I was terrified if I spoke up I would lose my job for making a mountain out of a molehill.

I’ve been in the workforce since I was 18. I always give my all in any job; I’m on time, well groomed, enthusiastic, and fully commit to the task at hand. I am what you would call a genuinely good employee.

So why have I been intimidated, vilified, taken advantage of, and made to feel like it’s all my fault?

I’m not talking about a domineering boss who rips into you for making a tiny mistake, or punishes you for being late once or twice. I’m talking about another kind of sanction for a crime far pettier than getting the coffee order wrong, or breaking the printer. And the punishment itself is far more insidious than being yelled at by your maniacal employer. I’m talking, of course, about the crime of being a woman, and all the sexual politics that accompany it.

Sexual harassment in the workplace is said to occur for a number of reasons. Petty, entitled excuses spewed out by the perpetrators and their enablers include drunkenness at a work function, rites of passage, or (my personal fave) women wearing ‘provocative’ work attire. I say to hell with that banal diatribe. Women who suffer at the hands of male superiors are simply punished for being a woman in a male space.

When I was very young, first year university, I had a really fabulous job. I was little blonde bombshell; full of life, very vivacious, and extraordinarily outgoing. The work environment was a happy, encouraging one, and staff would genuinely look forward to their shifts. Aside from anything else, the pay was great and the hours were super flexible, an ideal job to see me through my education.

My boss was also seemingly great. He was 30 something, had a wife and kids, and his manner was perfectly amiable. However, about a month into my employment things began to change.

It started with him joking in front of the rest of the staff about potentially starting an affair with me.

“Come on, what’s wrong with me? Why wouldn’t you go there?” he would laugh, all the while staring at me with genuine intent in his eyes.

The majority of the staff were under the age of 23. We didn’t know any better, so we all nervously laughed along with him. To the casual observer, I seemed to be taking the ‘jokes’ with a grain of salt. Inwardly, I was panicking.

As time marched on, the joking became more intimidating. He began to unashamedly brush up against me in passing, or cuddle me when I wasn’t looking. Once, he even put his hand between my legs when we were sitting next to each other. When he saw my horrified face, he laughed raucously and told me my reaction was priceless.

“Your face!” he said, still giggling. “Good thing you knew I was joking!”

And on it went. I tried to justify it to myself. This must be what the workforce is like. He hasn’t done anything major. He’s only mucking around. That’s just what happens in the grown-up world…

So I remained silent, terrified if I spoke up I would lose my job for making a mountain out of a molehill.

Eventually, my coworkers caught on that something was up. They started telling me how weird they thought he was around me. That it was obvious he had a giant crush, that he was, for lack of a better word, obsessed.

“I know,” I said. “But come on, he’s just kidding! It’s nothing.” The lie sounded dismally hollow, even to my inexperienced ears.

The problem was this; I came from an all girls high school. I had only been out a year. I grew up in the dance and theatre world, so most of my male friends were my age and gay. I had zero, and I mean zero experience with older men, let alone the lecherous ones. I didn’t even know what the word ‘lechery’ meant yet. I had no freaking clue that not only were his actions inappropriate, they were grounds for dismissal.

The comments kept coming thick and fast. He began to find ways to interject sex talk into every conversation, one day even using my epilepsy as sexual fodder.

“How funny would it be if you were having sex with a guy who didn’t know about your epilepsy, and you had a fit while he was inside you? He’d think he was amazing in bed, the way you’d be shaking!” he chuckled.

I froze. It took me a split second to pull myself together. I took a deep breath, laughed convincingly, and bolted. Again, I affirmed within myself it was a joke, a hilariously funny one, in fact.

Little did I know it was actually a potential lawsuit.

Then came the day I knew I had to do something. After parading his usual farce in front of the majority of the staff about the potential for our shacking up, he came to talk to me in person. The conversation was perfectly easy for him. Predators know how to gain and maintain the trust of their victims, which is why he was able to change the conversation so seamlessly.

“So, you’re sure you wouldn’t go there?” he said, laughing. To my young eyes, there was nothing threatening in this particular comment. After all, we were in a public place.

“Nope!” I laughed back, heaving an inward sigh of relief. I was calm, comfortable; he had succeeded in somehow placating me. But things can always take a turn for the worse.

“But seriously,” he muttered, suddenly quiet. “What’s wrong with me?”

Somewhere in my post-adolescent mind, alarm bells started to ring.

“Not that much,” he returned. “I’m nice aren’t I? And reasonably good looking, right?”

“Well…you’re married with kids!” I blurted out. For the first time, I was frightened of him. Intimidation had turned to terror in a flash.

“So?” he murmured, edging closer.

“You — you can’t actually be serious,” I hissed, trying to remain discrete.

He leaned back again, and started at me with hungry eyes.

“Okay,” he said, devouring my anxious face with his gaze. “Well, come to me when you get serious about it.” With that, he left.

I do not have the words to describe the shock, hurt, and fear I felt in that moment. It was nine years ago, but I can still feel the nausea, the blood pumping through my head, the flush of my face as I tried to process what had just happened. Angry tears came to my eyes, and I tried to blink them back. I was humiliated beyond belief.

How, how had I allowed this to escalate to the point where this, man, this creep, nearly old enough to be my father, had quite seriously propositioned his 18 year-old employee in a public space?

I couldn’t draw attention to this. I would be blamed, I knew it, for laughing along, for not speaking out, for not expressing my distress. The hierarchy of the workplace was 90 per cent male, there was no way he would be implicated. How I longed to scream out that I was being harassed, but I was scared of losing my job, scared of being hounded, scared of being tarred with the slut-shaming brush…the list of deterrents went on and on.

So instead I quit the next day. I didn’t say why, I just announced my resignation to one of the supervisors and hightailed it out of there. I found myself another job within two weeks, with a truly lovely male boss who would never have dreamed of treating his female staff with anything but the respect and support they deserve.

Still, I left my job without any closure. Looking back, I think of all the things I wanted to say to that monster. I would have told him he was disgusting; a nobody, a terrible misogynist who didn’t deserve his lovely wife and beautiful children. I would have said no, he wasn’t “reasonably good looking”; he was short, and fat, and balding, with a pig-like face and smarmy voice.

Most importantly of all, I would have made him fully aware that women won’t take his crap. We actually don’t like being preyed upon. We don’t find it flattering, or titillating, or any of the other ridiculous things these lecherous morons allow themselves to believe.

I wish someone had told me it was okay to tell someone about it.

Tell many people about it, in fact. That someone would have listened. And that, if it walks and talks like sexual harassment, that’s what it is. It wasn’t my responsibility to protect the culprit, or his family.

It’s easy to feel that our voices as women aren’t as valuable in the workplace, and as such must be stifled, even at the cost of our wellbeing. But the truth is, the only way to break the cycle of sexual harassment is to speak up about our experiences, and loudly at that.

If you like this article, please share it! Your clicks keep us alive!
Tags
bullying
sexual harrassment
sexism
sexism in the workplace
workplace harassment 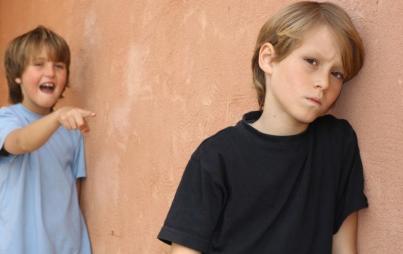 5 Signs Your Child Is The Classroom Bully