Why Silver Is The New Blonde 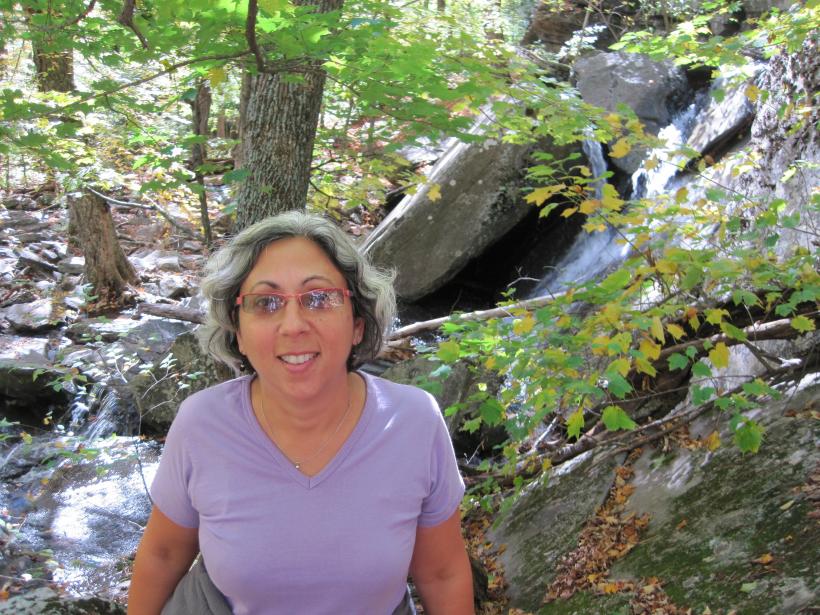 My gray hair doesn't come out of a bottle or a tube. It comes out of life—my life.

I grew up watching my mother run to the beauty parlor every four to six weeks so Aldis, her beautician, could touch up her hair with Miss Clairol rinse in an inky hue. As the days rolled by, the dye job slowly faded . . . and soon she was back to Aldis again. Mom longed to go gray, but Dad wouldn't let her—which pissed me off, even as a little girl. But it was the '60s and women often succumbed to their husband's whims, just like on Mad Men.

I personally never gave much thought to my locks, which were thick, pitch black, and wavy. My coiffeur philosophy was laissez faire or free-range at best: like an untended plant, I let it go its own way.

I didn't use hair product of any kind: no gel, sprays, butters, or ointments. I regularly transitioned from bushy to a funky crop without blinking an eye, and without warning. It was only hair, after all; it would grow back.

A wash-and-go kind of gal, I didn't have the patience or skill for a blow dryer, curling iron, or straightener. Once, I ran into my sister on the subway and she greeted me with an exasperated, "Don't you ever brush your hair?"

I spotted my first gray hair when I was in my early 20s. Before long, there were more metallic strands woven though my raven locks, like wires of sterling silver.

To be honest, I thought it looked kind of radical.

"I like it," he growled, clearly turned on. "It's really hot." That's all the convincing I needed: like fancy grillwork, the boys liked it shiny, too. 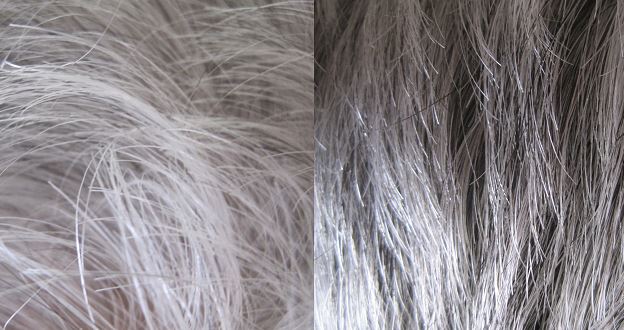 Over the decades, I've occasionally toyed with the idea of dyeing my tresses. But what shade? Candy-apple red? Café con leche? Roasted eggplant? I have trouble choosing dinner from a restaurant menu; how could I settle on a hair color when there are hundreds of possibilities?

Plus, I always knew I'd be one of those women who waited too long between dye jobs, and ended up with a skunk stripe down the center of my scalp, like Cruella De Vil. I saw myself standing at the mirror with a Sharpie for a quick touch-up. Not a pretty picture.

So why, when I'm cool with being a salt-and-pepper chick, does it so clearly unnerve others?

Though there's nary a wrinkle on my 55-year-old face, whenever I hang out with my friend's baby, people still assume she's my granddaughter. (The same thing happened when I was 40 and wore my son in a Björn.) I often get the "senior" price without even asking—and I think, "Screw it, if someone's going to be dumb enough to make assumptions, I'm going to be smart enough not to say a word."

Sometimes people—usually family members or close buddies—do their gray-bashing out loud. My choice to go gray clearly unsettled my dad—maybe because I was a defiant, silver-haired version of my mother.

My best friend Shelly, who's been getting a color fix for years, yanked out her first gray pube with tweezers (the horror!) the moment she spotted it. (So far, so good for me, in that department). Routinely, she'll ask me, "When are you going to cover up that shit?"

I just smile and respond, "Never." I think it annoys her; I'm secretly thrilled it does. 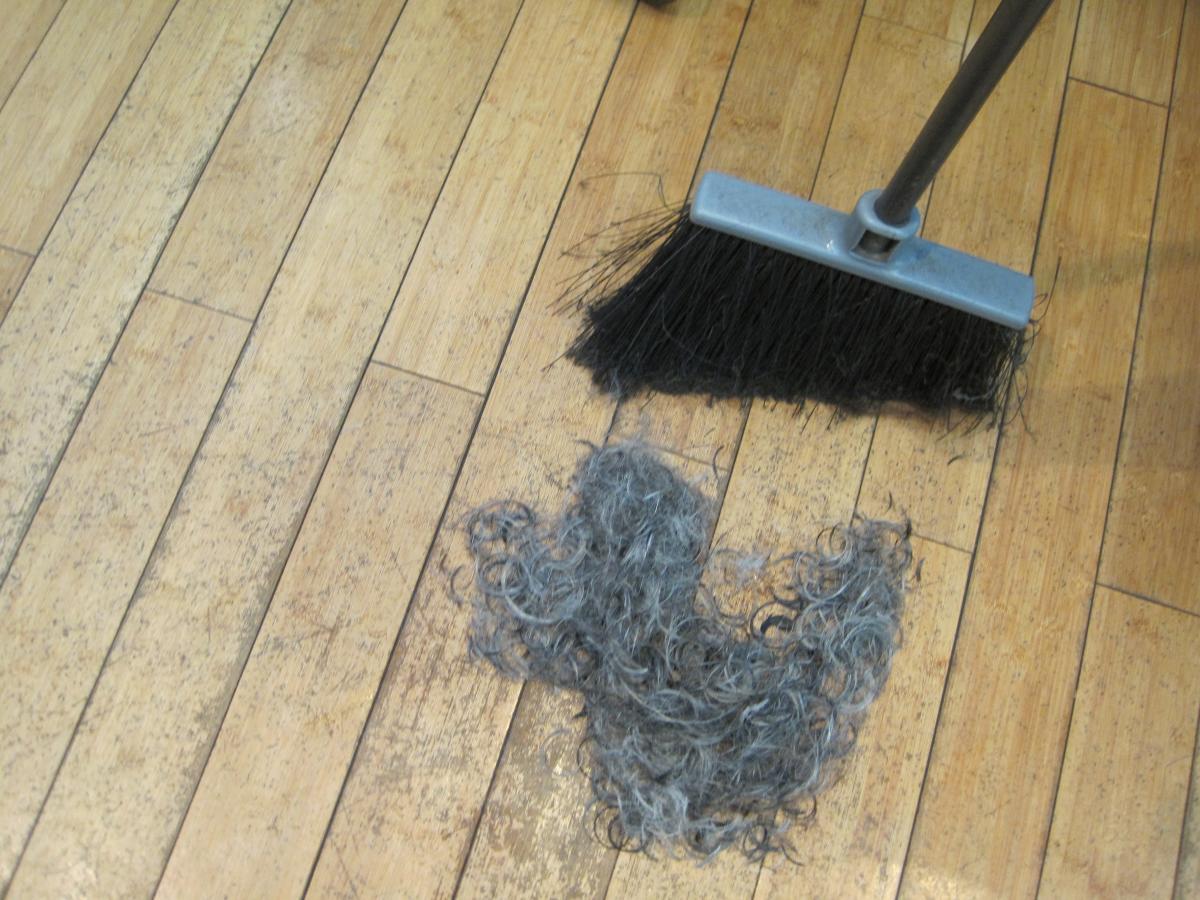 Every time someone responds negatively to my hair, I am stupefied. Why do people make assumptions, draw conclusions, take it like a personal affront? Fear of their own aging? Of their own mortality?

And Hollywood is no help. Rarely are there edgy, sexy silver foxes on the silver screen. Dame Judy, Helen Mirren, sure, but they're more champagne-hued than true gray. A few sterling-haired models have popped up, but they're the exception rather than the rule.

Guys like Richard Gere have let their pewter locks shine. But today, at 65, he's relegated to elderly eye candy in the Second Best Exotic Marigold Hotel. Plus, it's long been a belief that on men, gray hair is distinguished; on women, it's just . . . old. Well, screw that!

It never ceases to amaze me that people who fret about chemicals in their food and in their cleaning products will happily sit with ammonia, sodium carbonate, and hydrogen peroxide soaking into their scalps. No, thanks. I prefer going au naturel, which doesn't cost a cent and is unique. Me.

Ever wonder why hair turns gray? It's simply the result of less melanin in a hair follicle, which turns hair a more transparent color like silver or white as it grows. The older you get, the fewer pigment cells hang around to produce melanin. Hair actually starts out white, then specialized cells called melanocytes inject pigment (melanin) into cells containing keratin. See? It's science. Not scary at all.

My husband claims he can't wait until my whole head turns a silvery white. Right now, it's a compelling mix of snowy and jet, dark underneath and sprinkled with white on top, like a crazy cupcake. I doubt it could be duplicated in a salon.

The best take on going gray I ever saw was on a T-shirt in a motorcycle shop. It said: "This isn't gray, it's chrome." And then there's: "Silver is the new blonde." And "I don't have gray hair, I have wisdom highlights."

The way I think of it, my gray is the awesome product of my body's personal paintbrush. It doesn't come out of a bottle or a tube. It comes out of life—my life. And that's something that can never be bought at a salon.