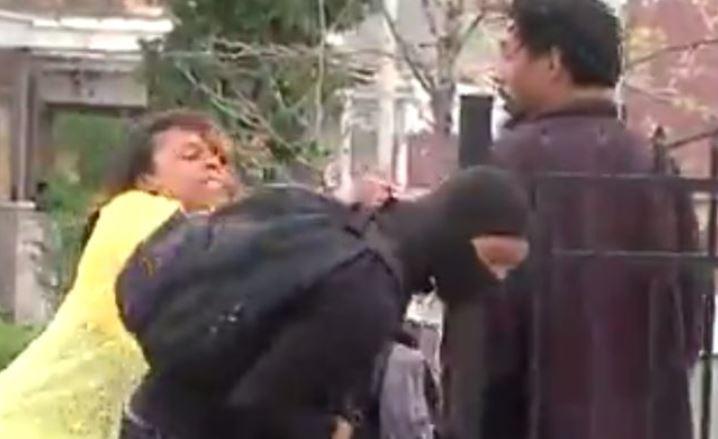 Why has a video of a woman hitting and berating her son earned praise? Could it be because she is a black woman beating her black son, and his humanity fails to even dawn on us in the first place?

Social media exploded this morning with support for the Baltimore mom who was caught on video repeatedly slapping and hitting her teenaged son as she dragged him away from the protests in support of Freddie Gray.

Hailed as everything from a hero to "mother of the year," she was initially reported to have reacted in embarrassment after seeing him throwing rocks at the police on TV, but later it was suggested that she actually was acting out of a desperate fear for her son's life.

In either case, I call bullshit.

When I first saw the positive media coverage, I expected to watch a video where a mom lost her cool momentarily. I was shocked instead to watch this woman physically assault and berate her son on video. This wasn't an action that could be chalked up to different parenting styles for different individuals. This was child abuse, full stop.

After I watched the video, I went from one site to another reading the comments. They were almost universally in favor of "teaching him a lesson," "setting him straight," and "taking control." In fact, the Baltimore police chief himself praised her for doing exactly that.

If I walked up to another person on the street and grabbed him by the neck, hit him in the head, slapped him in the face, screamed at him, called him names, and followed him out to the parking lot continuing my behavior, I would be arrested. And it wouldn't matter much whether I was embarrassed by him, worried about him, or just plain having a bad day. My behavior would stand on its own—and it would be criminal.

Yet somehow, this video merits praise instead. And I have to ask myself why that is. Is it because we have forgotten what child abuse looks like? Or is it because she is a black woman beating her black son, and his humanity fails to even dawn on us in the first place?

When I watch that video, I don't see a mother teaching her child anything except that she has lost control of herself. I see her child look at her without surprise, and then walk away. I see that child keep walking away as she continues to hit him, scream at him, and call him so many names that I can't understand any of them after they are all bleeped out. I see her son acting with grace and composure in the face of assault. I see a hero, and it isn't his mother.

Maybe this boy threw rocks at the police during a protest, or maybe he didn't. Maybe his mother was embarrassed, or maybe she was terrified. But none of these details excuse her behavior or make it any less abusive. Fear doesn't justify assault. In fact, that's kind of the entire point that the #BlackLivesMatter movement is trying to make. You don't get to beat or shoot or choke someone simply because you have a feeling, and if you do, you should be held accountable for your actions—not have them excused, rationalized, or praised. And that is true whether you are a mother, a cop, or a teenaged boy throwing rocks at the cops.

I was proud of my teenagers when they protested in support of Ferguson, but I will not pretend to know what that woman felt as she approached her son. I am not black, and I am not raising a black man in Baltimore. I do not claim to have even an inkling of understanding of her experience, but I do know what it is like to fear for my children's safety. I know that it can bring out an intensity of emotion that can be overwhelming. I also know that we mothers owe it to our children to admit when we messed up, and to try harder next time rather than denying that we messed up at all. That is how we model responsibility for our teenagers, and that is how we ultimately earn their respect.

When we meet our children with violence, we take the easy way out. It is easier to rule by fear than it is to create a relationship that is founded in compassion and mutual respect. But we don't do anyone any favors by relying on fear, and that is true whether we are talking about a mother hitting her son or a police force that leverages intimidation and oppression.

The real story in Baltimore has nothing to do with throwing rocks at the police. It's about a population that has been so targeted by racism and oppression that they have taken to the streets en masse to protest their mistreatment. It's about a system so corrupt that a black man can be beaten to death for the "crime" of walking down the street. It's about living in a society that puts crime victims on trial instead of the police that killed them.

If you applaud the mother in the video for "disciplining" her son for throwing rocks, do you also vehemently demand that the police be held accountable for the murder of hundreds of black men? Or are you simply comfortable excusing all violence against black men, in whatever form it takes?

I do not advocate violence. I certainly don't encourage protestors against police brutality to engage in their own brutality. When we sink to their level, we do not win—we become what we protested against. If that was my son, I would have told him to stop throwing rocks, too.

But I also would have stood beside him, even if that meant storming government buildings or ousting the police chief from office. And I would have told him that I was proud of him for risking his own safety to bring about positive change for his community. He was brave, and I am proud to belong to a nation that was founded on the kind of bravery that recognizes our duty to overthrow unjust governments and rebel against tyranny.

It isn't comfortable to confront our own failings, whether as individuals or as a society. It is easier to blame others and point fingers than it is to challenge our firmly held beliefs and convictions. But the truth is that our cities are plagued by racism, our police have become figures of oppression who feed into a prison industrial complex, and our black men are missing.

I don't know how we can solve these problems and create a better truth for our children, but I do know that it isn't by turning our military against our own people—or by beating our children. Even if we see it every day on the news, it is still wrong, it is still abuse, and we can do better.

We must do better.

If you like this article, please share it! Your clicks keep us alive!
Tags
Baltimore
mom
abuse
beating son
video
protests
freddie gray