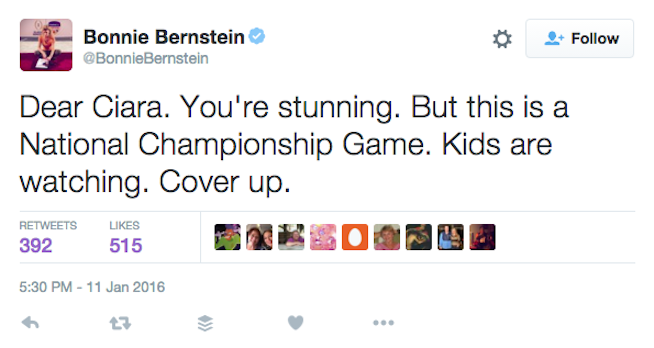 Singer Ciara performed the national anthem before last night's college football national championship game, but it's not her vocal prowess making headlines today –– it's her boobs. Fearing for the OMGchildren who may have been watching, former ESPN reporter Bonnie Bernstein, who now serves as the VP of Content and Brand Development for Campus Insiders, took to Twitter to tell Ciara to cover up.

Shockingly, the Twitter world wasn't feeling Bernstein's brand of internalized misogyny, but Bernstein was unapologetic and told her naysayers to "grow up" in a subsequent tweet.

Ciara shared video and pictures of herself at the game but didn't reply directly to Bernstein's comments on Twitter (unless you count wishing everyone a good day).

Since I'm far less gracious than Ciara, I will respond for her.

Bonnie, I know that you've been raised to believe that women's bodies need to be covered up. You've been hit over the head with misogyny since the day you were born and, for God's sake, you worked at ESPN; I can only imagine the degree of toxic masculinity you encountered on a daily basis, much less how much of your femininity you had to suppress to fit in. I understand why you feel the way you do, but that doesn't excuse your comments.

Women aren't the enemy. Our bodies aren't shameful or something to be hidden. We are taught to distrust each other and to internalize the misogyny inflicted upon us, but we can do better. You are a woman in a position of power, and it is up to you to set an example. Strong women don't tear each other down. Choose strength.

If you like this article, please share it! Your clicks keep us alive!
Tags
bonnie bernstein
ciara
ciara national championship game