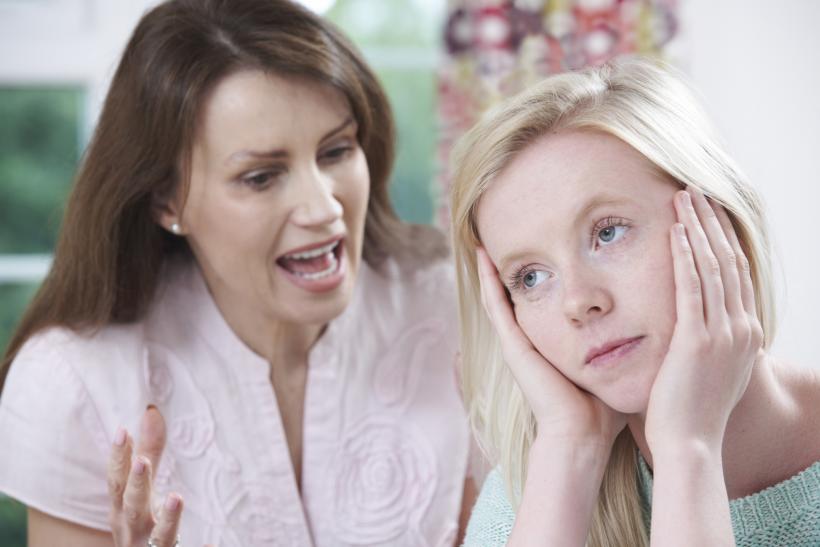 As kids get older, it's time to ease off from the litany of rules and let them start to make more of their own choices, too. However, that doesn't mean that all expectations vanish.

Earlier this week, Baltimore mom Toya Graham made headlines when she was caught on video beating her teenaged son and dragging him away from the protests in support of Freddie Gray.

While much has already been written about Graham's decision to use physical violence against her son, including by me, the comments and conversations that arose after the video surfaced made it clear that it is the exception, not the norm, to decry the use of corporal punishment by parents—particularly when the punishment is being meted out to teenagers.

I was spanked as a child and back then I preferred it to other forms of discipline. In my household, there were only two options: a quick spanking or shame-ridden "talks" and grounding and alienation that stretched on for weeks. When I first became a parent, I drew on those experiences and settled on what I perceived as the lesser of two evils: I tried to redirect and communicate first but when all else failed I ked my kids.

The problem with spanking is that it might be effective in controlling a given behavior but it creates feelings and consequences in children that are anything but desirable. If the only choice is between a brief, light spanking and emotional abuse, then spanking clearly wins out. But, eventually I recognized that the two approaches my parents had used weren't the only two ones out there, and they weren't the best ones, either. My kids deserved better and I committed to doing better, too.

Of course, everything you think you know about parenting becomes a sick and twisted joke when your kids hit their teen years. My teenagers are taller than me, and they definitely aren't going to lay down while I spank them. Sending them to their room might be appealing but you can't carry them in there if they refuse to go, and isolating teenagers rarely addresses the problematic behavior. Simply put, teenagers are hormonal assholes, and parenting them can leave you feeling like there are no good choices.

While I am no parenting expert, I have thus far survived raising three teenagers. Along the way, I've had my patience and self-control tested to the max, but I've also learned a few things. Like that it is possible to raise responsible teenagers without the use of physical force—and these are my tips for doing exactly that.

It might seem strange to begin a series of tips for effective discipline with the advice to listen, but I think it's the foundation of any healthy relationship. Make it clear to your kids that you will listen to them—without offering unsolicited advice. Advice is not a form of listening, and it's hard to hear someone while you are talking or judging.

Listening in teenage parenting terms also requires a lot of just being present. They rarely decide to talk when you hope they will, and it can take a lot of time hanging out together before anything deep or meaningful comes up.

Boundaries are tricky for even adults to navigate, but I have found that they are critical for maintaining a healthy and low-conflict relationship with my teenagers. Boundaries aren't rules per se, but simple things that you will not accept from your kids. I do not tolerate yelling, diversion, or hate speech, and I have made that clear to my kids. Boundaries are individual and it's important that your kids know yours.

Parents often shy away from expressing their own emotions and allowing their kids to see them as vulnerable, but simple, direct, non-manipulative communication about our emotions teaches teenagers to respect and honor the emotions of others.

4. Focus On Consequences, Not Punishment

Punishment may not be very effective in general but for teens it can create an emotional chasm that can be hard to repair—and that can have serious consequences on the decisions teens make when they feel misunderstood and unsupported by their parents.

That doesn't mean, however, that parents should just give their teenagers free reign. Instead, I find it the most effective to match simple, shame-free consequences to the "crime." If you don't clean up after yourself in the bathroom repeatedly, you get to scrub the entire bathroom; if you don't have time for chores, you don't have time to use your glowing screens that day, either.

As kids get older it's time to ease off from the litany of rules and let them start to make more of their own choices, too. However, that doesn't mean that all expectations vanish. My kids and I made a few basic house rules and came up with predetermined consequences for violating them together, and then everyone signed off on them (literally). This created a sense of buy-in and ownership of the process that has lingered even when someone has gotten pissed off down the line.

It's important to have clear expectations and consequences, but it's equally important to be flexible. Maybe chores should always be finished before dinner . . . except for when a friend comes over and can only stay until dinner. Or perhaps screens shouldn't be used at the dinner table . . . except for when something super exciting is happening and your daughter is desperate to follow it real-time.

No rule is more important than creating a healthy relationship with your child, and it's important to ask yourself whether it's worth it before blindly enforcing every rule every time.

By the same token, teenagers need to begin to take responsibility for their own lives. While managing every aspect of our kids' lives may create pristine results now, it doesn't raise independent, autonomous adults.

Now is the time to let your kids step up and manage their own homework and activities, while recognizing that almost no teenager will do this perfectly. Failure should be embraced as a teachable moment instead of used to shame or as evidence that your child isn't ready to manage his own life yet. Of course he isn't ready! It's his job now to learn how, much like he did as a toddler learning to walk, and there will be plenty of trips and falls along the way.

8. Detach From The Drama

Teenagers thrive on drama, high emotions, and intensity. It's surprisingly easy to find yourself sucked into a dysfunctional and even toxic cycle if you aren't careful.

But just because all of that is normal teenage behavior doesn't mean you have to let yourself get sucked in. I've found meditation techniques to be the most helpful at remaining detached in the heat of the moment; teach yourself to recognize that you're mad as hell at your teenager and then release it. No one is at their best while in the throes of anger and it's important to remain detached from their attempts to suck you in.

Sometimes, emotional detachment doesn't cut it. One of my favorite strategies for parenting is taking a timeout for myself. Teenagers know how to push buttons and it can be incredibly triggering to feel disrespected and even invalidated. It's hard to navigate the balance between guiding and controlling, and did I mention that teenagers can be huge assholes?

When emotions run high, and you feel yourself losing your shit, it isn't the time to drive home your point or rush in and drag your son away. It is time to take a timeout, even if that means locking yourself in the bathroom with the fan on and the water running, big ugly crying, and texting your BFF about what an entitled jerk your kid is. That's the cold, hard, ugly reality of parenting teens and it's preferable to speaking in anger much less hitting them.

10. Be Gentle With Yourself

Parenting is hard and none of us are perfect. Shame is just as damaging to us as it is to our kids. Learning to take a gentle and loving approach with ourselves rather than demanding perfection goes a long way toward helping us shake off our own mis-steps and recommit to our chosen path.

When we yell at our kids or hit them, the only thing that we teach them about ourselves is that we lack self-control. Choosing another path requires a devout commitment and the willingness to critically examine our own behavior, and that is something to be proud of in and of itself.

Like our kids, we will stumble and even fall, but all that matters is that we pick ourselves up, dust ourselves off, admit and forgive ourselves for our mistakes, and keep doing the best we can with what we have.

If you like this article, please share it! Your clicks keep us alive!
Tags
parenting
teenagers
violence
Spanking
advice
Toya Graham
Baltimore