Lonely and Confused: How Parenthood Sent This Mom Into Therapy 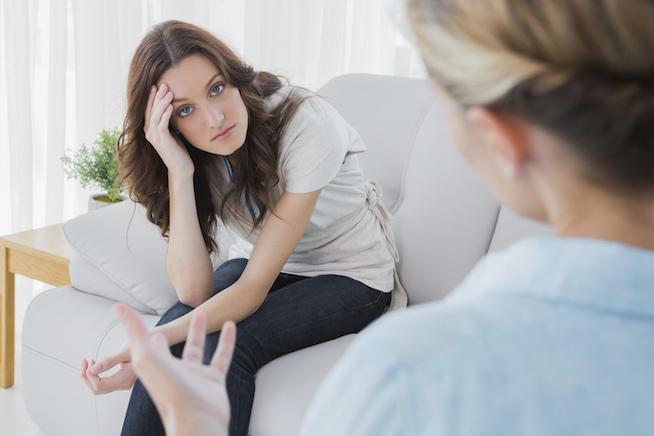 Screwing up is inevitable.

Within a week of my daughter being born I found myself thinking about my parents and the sacrifices they made for us. What I realized, looking back over the years, is their sacrifices came with a lot of resentment.

These days, parenting has been the biggest subject in my life. I’m living it, breathing it, and recently started going to therapy because of it. Since having my daughter two years ago, I’ve been at odds with my own parents, whom, I’ve come to realize, parented me in a much different way than how I’m parenting my daughter. Not that I’m comparing, but since I became a mom, I’ve come to realize my childhood was a bit dysfunctional, which led me to needing to deal with some unresolved issues. Differing parenting “styles” is not an uncommon phenomenon between generations. It happens among peers as well, contributing to that other phenomenon known as mom loneliness . . . oh, and let’s not forget mommy guilt.

My parents had my brother and myself when they were 18 and 19 years old. We were not planned. They were not emotionally ready for kids. While they did the best they could to provide us with a roof over our heads, clothes on our backs, and food in our bellies . . . they were still growing up themselves, and dealing with their own unresolved issues from their own childhoods. My father grew up as an immigrant in a strange country with a horrifically violent father, and my mother grew up in poverty with an alcoholic mother.

Within a week of my daughter being born I found myself thinking about my parents and the sacrifices they made for us. What I realized, looking back over the years, is that their sacrifices came with a lot of resentment. Resentment towards my brother, towards myself, and towards each other. These resentments came out in my father’s infidelities and violence towards us and my mother and her passive aggression and misplaced anger, which we bore the brunt of. Yet, if you asked them, they would say they worked hard all of their lives to provide to us with better than what they both had growing up.

As I became more and more aware of the dysfunctional way I was raised and the neglect I experienced, I became more and more protective of my child, leading to some serious trust issues. I started to push my own friends away. I rarely took a break because I didn’t trust babysitters. I was obsessed with trying to do everything “right.” I didn’t know what “right” was. My understanding had to come from my instincts and picking what felt right based on advice from theIinternet, other Moms, and books.

When visiting my own parents with my daughter, a couple of scenarios stood out to me. They made me feel uncomfortable, but were enlightening in helping me understand their “style” of parenting. When calling my daughter smart, my father asked me, “What if she isn’t smart?” This confused me, because to me, she already was smart. When breastfeeding my daughter, my father freaked out and had to leave the room. My mother held my four-month-old baby over her head and told her to tell me to shut up —“tell Mommy to shut up,” she said. It was supposed to be a joke. As children, we weren’t respected in our household. This, I realized, contributed to some of the “problems” I caused my parents, which ultimately came from their own mistakes in the “style” they parented us in — the do-as-I-say-not-as-I-do, go-to-your-room, father-knows-best approach.

After I graduated college, years before my daughter was born, I moved across the country to explore and find a job where I could work and gain experience professionally. Ironically, I found work in a nonprofit, anti-violence organization where I learned about violence in relationships, the effects on children who witness abuse, and addictions — I had dealt with anxiety issues, and my brother struggled with an addiction for years. I found myself helping people whose upbringing and experiences resembled mine, and through this work I developed an understanding of healthy relationships, communication and built my own confidence and self-esteem. When my daughter was born, I was home alone with her all day and night while my partner worked doubles. With extra time to think and too much time alone, my thoughts started to become toxic. This led me to start feeling angry over some of my childhood experiences. I started to realize I had been distracting myself from dealing with my issues by overworking. Once I went back to work I realized I had constantly been triggered by some of the people I was trying to help. Trying to balance motherhood and work in these circumstances eventually led to my being laid off so I could start to heal.

I was the first of my friends to cross over to the other side into parenthood. When visiting with them I kept my inner turmoil to myself, as I didn’t want to freak them out. My daughter’s schedule was a mess: we were typically up throughout the night and slept throughout the day. I was nervous around other moms I knew. While I had my own issues, so did they. I started to feel a loneliness I had never known before. It was crippling and had a terrible effect on my self-esteem. I felt depressed and guilty over feeling like I couldn’t trust my own family anymore. I contacted a therapist where I could sort through my past and start to work on rebuilding my confidence.

I worked with a woman who once said she didn’t realize just how important her women friends were until she became a mom. After I started to talk to my own mom less, and started to connect with some new mom friends, I realized that we all go through a crazy time once we experience the trauma of realizing what parenting is all about and the overwhelming love that comes with it. Most of us are going through something hard, whether it’s a shitty dad who doesn’t do his part, a child born with health issues, the loss of a child, or post-partum depression.

Most parents try really hard in the face of adversity to create a different life for their children. For my parents, it was staying out of poverty by working hard; for my dad's parents it was moving to a new country to escape famine and war; for my mom’s mom it was leaving an abusive husband and his income so she and her children could feel safe. I don’t begrudge my parents for the way they raised me, but I know I have healing to do in the way of building my confidence and taking care of my anxieties, so I can be a better mom. So she won’t have to struggle in the same ways I did.

Parenting seems to be about a love so overwhelming that you’re bound to make mistakes along the way. I’m sure I will make mistakes, but through it all, I want my child to feel loved and respected. My hope is she will grow up to feel safe and able to make connections in the world, so that when she finds herself struggling, she is self-compassionate and has support from others. Even if what she’s struggling with is anger at me about the way I raised her.

If you like this article, please share it! Your clicks keep us alive!
Tags
parenting
therapy
mom guilt

Why I Can't Be Friends With My Exes
Isobel Jones

Period Envy: What My Father Taught Me About Misogyny
Isobel Jones

Lonely and Confused: How Parenthood Sent This Mom Into Therapy
Isobel Jones