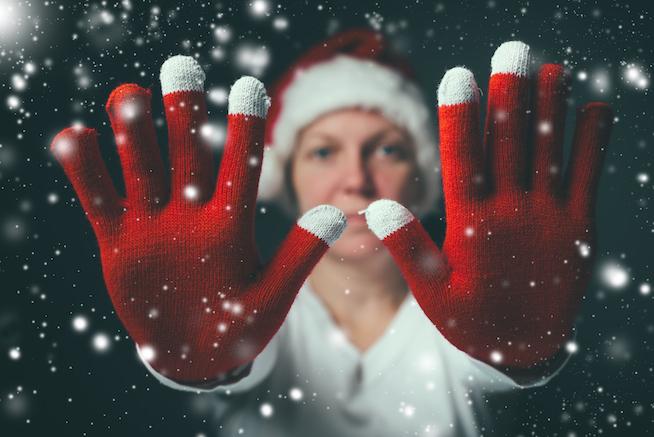 The holidays aren't happy for all of us.

New Year’s, though, will be spent alone: no parties, no dates, no drinks, no dancing. Just me in my room, swaddled in blankets, tissues within convenient reach.

Last holiday season, my newlywed husband and I were broke. For Thanksgiving I bought pre-made turkey and cranberry sandwiches from the grocery store, put on a polka-dotted dress, and made him take a picture of me pulling them out of the oven. The caption on my Instagram reads: Dutiful housewife.

For Christmas, we continued our tradition of celebrating on the 24th instead of the 25th. We procured supplies for Manhattans, ate bourbon-soaked cherries, and sang West Side Story to the befuddlement of the cats. We were broke from our honeymoon, so there were no presents and there was no tree, but by God there was wassailing.

For New Year's Eve, we stayed in and I fell asleep early. After all, it had been a long day at work. The year before, we drank our way through the largest bottle of champagne the liquor store carried, and the year before that, we went out to our favorite tapas bar — our place — to dance and drink with silly dollar store hats until four in the morning.

I have not been single during this time of year since 2005, my senior year of high school, and now, as a 27-year-old woman, I look into the next month or so of global celebration and see...nothing.

Normally, I adore cooking for other people, especially when the meal is elaborate or fancy — and yet the idea of preparing a holiday dinner this year seems pointless. I used to find unadulterated joy in choosing presents for the people in my life, in finding exactly the thing they’d most appreciate and cherish, but this year it feels like an errand to complete, preferably as quickly as possible. In past years, I saw New Year’s Eve as an evening with potential, but without pressure. If I wanted to go out, I’d go. If not, there’s no shame in movies, Chinese food, and even missing the ball drop. This year, my mind obsesses over sparkly dresses, champagne bubbles, and so many couples, all of them waiting till midnight to kiss.

For the first time since leaving my husband, I feel alone, and not just alone, but lonely.

I have dated consistently since I was 17, and kept up the practice during my separation. I got on Tinder and found someone who could see us reading together as the snow fell. I pursued my long-time friend turned friend-with-benefits until we became a legitimate couple — then realized that I could not escape the reality of my situation: I have a husband. I left him four months ago. I am empty, confused, and deeply sad.

And I am alone.

I’m supposed to spend — I want to spend — the holidays celebrating the love in my life. But without a man — a man who loves my friends, who cannot cook but is eager to learn, who loves to eat — I don’t feel whole.

It doesn’t seem feminist. At the end of the day, I want to be thankful for the love that’s in my life, instead of reflecting on what isn’t.

I bought Christmas presents this week: one for my mother, one for my best friend, and one for my estranged husband. A strange assortment, perhaps, but I couldn’t not. I don’t anticipate erecting a tree, cooking a roast, or watching It’s A Wonderful Life, but I do want to give to the people who deserve it most.

My mother gave me a home when I walked out of my own: first a blow-up mattress in the summer clearance section of her consignment shop, then one of three bedrooms in our beach-themed, water-adjacent apartment. There is gratitude in my heart, and I want to wrap it up in a box, along with something I know she’ll love.

I know that I have no greater supporter in anything I do than my best friend. She’s an artist like me, except creativity comes out of her mouth in a beautiful coloratura soprano’s tone instead of in words on paper, and she’s stuck in the same mid-20s struggle I am: no man, no solid career ground, but a completely cemented friendship nevertheless. I want her to know that I love her, especially on Christmas, when it’s so desperately needed.

As for my husband — it’s hard to explain. But I’m alone and he’s alone, and I wanted to make a gesture of goodwill.

New Year’s, though, will be spent alone: no parties, no dates, no drinks, no dancing. Just me in my room, swaddled in blankets, tissues within convenient reach. Nothing about 2015 has gone according to plan — taking disability from work, leaving my husband, moving in with my mother — but perhaps 2016 will be better.

Perhaps I’ll make huge strides in my writing career, find a beautiful city apartment, learn to fill the emptiness that’s grown inside me, and next time the holidays come around, I’ll have the love that’s missing this time around.

But this year, I’ll work toward being thankful for the love I have, giving away the love I feel, and making my peace with the love in the world. I may not be whole, happy, or normal, but I have a resolution, albeit made of maybes, and that fits perfectly in with the spirit of the holidays.

If you like this article, please share it! Your clicks keep us alive!
Tags
alone during the holidays
single during holidays
self-care