What I Learned About Myself From My Miserable Pregnancy And Birth 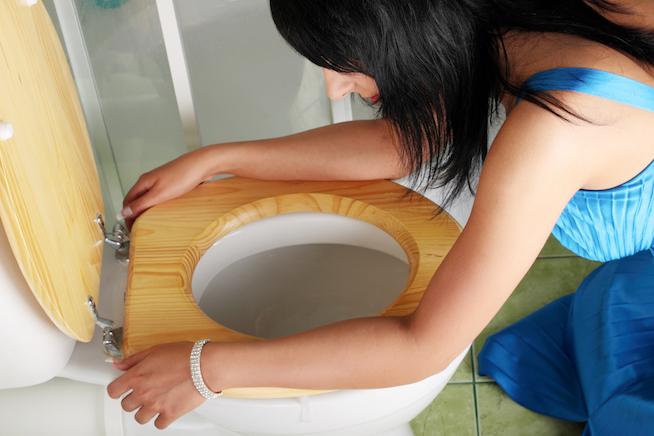 This lady looks way too happy to vomit.

I had hyperemesis, which is a fancy word that just means “morning sickness that will not die.”

I was one of those women who had always wanted to be pregnant. You know the type. I daydreamed about what it would be like; I dreamed and I schemed. Then finally, one day, I was ready to try for it. As a queer woman married to another person with a uterus, I was prepared for the reality that getting pregnant might be complicated, time-consuming, and difficult. Instead, our sperm donor came over and produced the sample (ahem, semen) in an empty salsa jar. My wife put the sample into my body, and that was that. Two weeks after our third try, I found myself suddenly more tired than I had ever been in my entire life. I fell asleep standing up at work. I was pregnant, and I was thrilled.

Then I got sick.

And then I stayed sick.

And then I got even sicker.

I had hyperemesis, which is a fancy word that just means “morning sickness that will not die.” Over the course of my pregnancy, I was well enough to work for a whole two months. And those two months were still pretty bad. I’m talking puking-outside-Planned-Parenthood-on-the-way-to-work-bad. The pregnancy that I had dreamed about for so long became a living nightmare.

But I still had the birth to look forward to!

I was in labor exactly one week before it was finally determined that a C-section was needed. One. Week. My midwife said it was the longest labor she had ever seen.

A week after the C-section, my incision became infected and had to be reopened.

A week after that, my gallbladder went completely nuts. It needed to be removed. So within four weeks, I had two surgeries, and then I was expected to care for a helpless newborn baby, essentially on my own, because my wife’s leave from work was over. I got postpartum depression. I got PTSD.

A human being does not go through an experience like that without getting to know themselves really, really, well. I learned more about myself than I could have ever imagined. Today, I am going to share some of those lessons with you.

I am way weaker than I had ever imagined.

Throughout my pregnancy, I kept telling my wife that I wanted to ride a horse.

Now, I have ridden a horse exactly once in my memory, and it did not go well. I really don’t feel like I need to relive that embarrassment, actually. For me it wasn’t really about an actual equestrian interest, the horse was just a symbol. I wanted to be a strong and capable pregnant woman, taking the world by storm, possibly while on horseback.

Instead, being pregnant was profoundly humbling. Most days I could not make it down the stairs. Many days I could not get out of bed. Some days I could not lean over very far. I had to ask for help with every. little. thing. And that hurt my pride. During labor I was constantly leaning on other people for support, and afterwards I could barely take care of myself, let alone a baby.

It turns out, I am made of flesh and gross gooey stuff and feelings. I can be severely weakened, and I can be rendered completely incapable of doing the things that I want, or even need, to do. Being able-bodied, and able to take care of myself, is at best a temporary privilege.

I am way stronger than I had ever imagined.

I look back on the last year of my life, and I am in total shock that I survived. But I am here. I made it through. I keep right on surviving things that I think will break me and destroy me forever. I keep waking up in the morning and noticing that, despite being positive that it was impossible, I made it through. And it is starting to get easier, day by day. I despise that old cliche, “What doesn’t kill us only makes us stronger!” (just tell that to my bad ankle…), but I do feel like I have been fundamentally strengthened. Or maybe I’ve discovered strength that I always had. Either way, turns out I’m a total badass.

I am really, deeply, and categorically uptight, and that isn’t something I can change with meditation or deep breathing or attempting to “mellow out.”

I enjoy the smell of nag champa as much as the next hippie, I visit a Buddhist temple sometimes, and I have done yoga. But no one has ever, ever, described me as “laid back.” I don’t think it’s a bad thing for me to try to relax a little, and certainly I need tactics for coping with anxiety. But deep deep down in my truest self? I’m uptight. I’m uptight about spots on the dishes. I’m uptight about being on time. I’m uptight about the standards I hold myself to. Being told to relax and let everything go during labor, while great advice, felt like I was in direct conflict with one of the most basic parts of myself.

You guys, I was basically straight edge in high school. I’m the kind of lady who enjoys a drink pretty occasionally but never considers anything harder than that. My mom pukes whenever she has opiates. And, as aforementioned, I am uptight, and part of that uptightness is wanting to stay right here in reality, thank you very much!

So when they offered me morphine for the pain, I only said yes out of desperation. I thought it was going to be terrible. But it was the best. It was the best. Oh my goodness, was it ever the best. I’m really really glad that is a controlled substance.

I have trust issues — and that’s a good thing.

I do not trust easily. It takes me a lot of time, and truthfully more than just time, to start to trust someone. Even then, I can continue to have my guard up in certain scenarios. This is something I have wished that I could turn off about myself in the past, something I’ve felt guilty about with both friends and romantic partners. But it turns out to be a very useful instinct! If I am uncomfortable with you in my birth space, I am going to ask you to GTFO. If a doctor gives me terrible breastfeeding advice, I am going to look that shit up myself and get a second opinion, and then drop that doctor like a hot potato. And that works. That helps me keep myself, and my kid, safe.

I don’t have time for bullshit.

When you are literally (OK, figuratively) walking through the fires of hell, you do not have time to stop and debate their color. You do not have time for people who put you down, for people who think their feelings are more important than yours, for people who want to consider your problems hypothetically rather than recognizing that you are going through them. Actually, you never had time for any of that mess. Not one of us does. We’ve got lives to live. But being in constant crisis mode for a full year, you suddenly have even less time than before. You are forced to realize it, deep down in your bones, and stop making time for all the bullshit you’ve been making time for.

If you like this article, please share it! Your clicks keep us alive!
Tags
pregnancy
hyperemsis
infection
PTSD