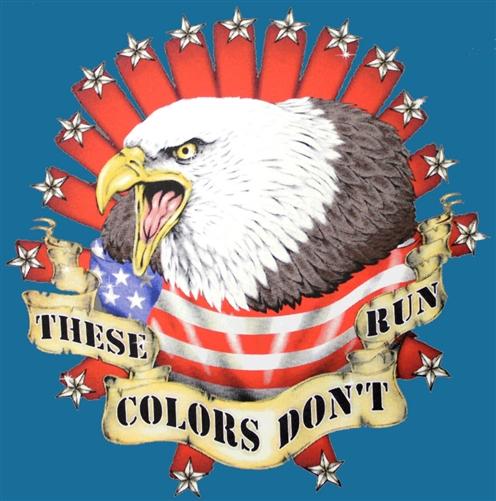 Independence Day is upon us. The 240th one. Is there a better occasion to demonstrate your deep and abiding love for America?

No. There is not.

Here are 24 ways to really show your stripes — the red, white, and blue ones, of course.

(I could come up with 240, but in the time that takes, I would be able to paint my front door in the image of an American flag.)

All over your car. And your neighbor’s car.

Nothing says “I LOVE MY COUNTRY” like getting your finger blown off by something you transported illegally from Mexico.

Independence Day is basically the celebration of America’s divorce from England.

If you’re thinking about dumping your spouse, now seems like an apropos time. Bring sparklers.

One for the truck. Three for the house. Five concealed.

When discharging into the air, make sure to angle AWAY from your house.

For when The Liberals take your assault rifles.

For when The Liberals take your shotguns.

For when The Zombies take your bayonets.

For when the Zombies chase you World War Z-style with the aforementioned swords.

Just for today though, let’s not be hasty.

Better yet, use the aforementioned assault rifle to shoot them down. WWJD.

Get one. Steal a baby if you have to.

I've been through the desert on a horse with no name...

Keep your dessert as white as your Presidential hopeful.

Bonus: Boy Scouts to raise and lower at dawn and dusk.

Optional: Star-Spangled bikini and/or T-shirt that reads “These Colors Don’t Run” with eagle, $19.98, made in America (maybe).

Put in on your burgers.

Put it in your baked beans (Boston, obviously).

The pig is the penultimate American farm animal.

The more cows the better.

What else is going to produce methane?

Buy American. So, Chevy only.

Toyota Camry? No. I mean, they’re made in America, but they originally came from Japan.

American-made cars scream, “I love my Country so much, I don’t care that I’m driving a piece of junk.”

I mean, they were probably made by a 15-year-old in Bangladesh, but no one has to know that.

FREEDOM ISN’T FREE (but it is deeply discounted).

If you just can’t stomach the thought of foreign labor, buy your shirts at Walmart.

What’s more American than minimum wage and small-business-crushing capitalism? Nothing.

21. Fried everything else you can find to fry.

How about that one with Mel Gibson?

The really patriotic one... What’s it called?

Only in America can an anti-Semitic Australian play a hero of the Revolutionary War.

The American beer you can enjoy with none of the “guilt” of a regular Coors, at 149 calories.

On a serious note, for fair trade clothing, you can shop here.