Take The Cake: Power To The Thinnest 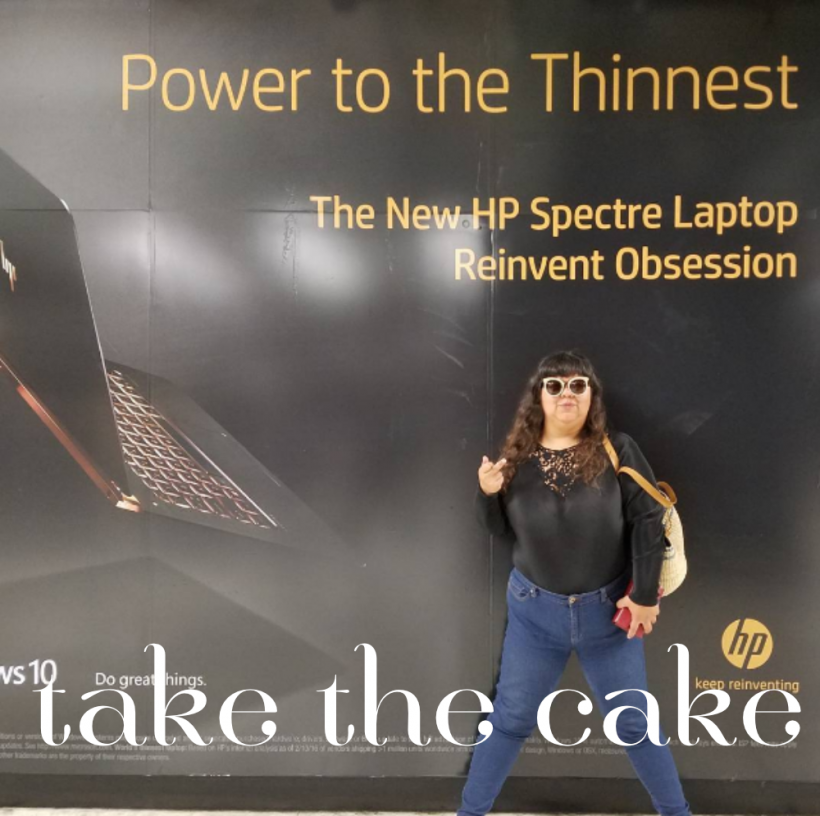 "This is the subtlety of advertising that doesn’t escape people like me. It is even more powerful because of its deniability. It’s like the dirty joke at the dinner table that the kids miss." Image: author

Last week I posted an image of myself on Instagram, middle finger raised, in front of an enormous ad that said “Power to the Thinnest.”

This is HP’s latest brainchild, a campaign to promote their new slender laptop. This image has garnered a lot of hateful attention on the ‘gramz. In these moments I imagine myself as a fatter, darker version of David Attenborough: “See here the white dude exhibiting tantrum when the rude feminist insults his computer-toy friends.”

Their primary critique seems to be that I am wrong, that this slogan “Power to the Thinnest” is utterly innocuous and makes zero reference to body size. But I don’t agree. I don’t think it’s an accident that perhaps the most relevant word — “laptop” — was left off the end of the phrase.

This is the subtlety of advertising that doesn’t escape people like me. It is even more powerful because of its deniability. It’s like the dirty joke at the dinner table that the kids miss.

Back to the story: I had spent the morning at a work meeting, and my work bud (Juliana) and I decided to commute to downtown San Francisco together so we could check out some potential office space.

When we arrive at the Powell station in the heart of SF's shopping district, probably the most frequented stop on the line — Juliana asks, "Have you seen these ads? They are everywhere."

I look behind me and see an enormous image of a laptop beside the phrase "Power to the Thinnest. The New HP Spectre Laptop. Reinvent Obsession." And Juliana is right; it is plastered EVERYwhere.

It is on every wall, on the ground, on the columns. It is right next to the ticket machine, right next to entrance gates to the train, above your head as you descend the elevators.

I legit am walking on fatphobia.

In the midst of a body love revolution, I know some advertisers are still trying to keep tired, old aesthetics alive. Because, hey, when there is no pain to sell to, then the bottom line suffers.

It is almost too coincidental that just last week I wrote about feeling alienated in San Francisco because I am a fat person. And then, boom, I am walking inside the advertising equivalent of a fat hate cube on my way to work.

In many ways this ad was a real-time emblem of the way that fat people are made to feel unwelcome in public spaces — except, often, this is done with microagressions, glares, sighs, and other difficult-to-exactly-pinpoint gestures of social rejection. But here HP is, just “saying it like it is.”

This is just the same ol’ misogyny we all know, but through the lens of presumed tech inventiveness this sort of messaging is reimagined as interesting and fearless.

The fact that I was headed to look at office space reminded me of the ways that fatphobia manifests professionally for fat women all the time. Fat women are taught shame from an early age, and that shame maps onto our sexist education in feminine inferiority.

This dual education in sexism and fatphobia leads to all kinds of negative professional work outcomes.

I can attest in my own personal life that I have lost opportunities for career stability because I did not have the kind of body that a sexist manager wanted to look at daily, or because I don't "look" like the kind of person people can take seriously, or because I am unwilling to kiss someone's ass constantly.

When you deal with marginalization — the way women of color and fat people do — it makes eating shit at work more challenging than for folks who have more privilege well-springs to draw upon.

This is not to mention the times that I — like other fat folks — have opted out of opportunities and interviews because we felt confident we wouldn't be seriously considered as candidates or we had nothing to wear to the interview that made us feel confident and comfortable. Because fatphobia is all of this — it is the times that people openly or subtly stigmatize us AND the times that we make ourselves invisible.

In the new wave of ironic copywriting (an increasingly frequent touchstone of the tech sector — see the article “Sincerity, Camp, And How Big Tech Got So Cute"), this slogan becomes a double entendre that plays on preexisting cultural bias with an in-your-face “keeping it real” bravado.

This is just the same ol’ misogyny we all know, but through the lens of presumed tech inventiveness this sort of messaging is reimagined as interesting and fearless.

It is hard not to bow to the sexist control that men attempt to create on the Internet.

But I know I’m right. So I’ll end this story the way that it started: fuck ‘em.

If you like this article, please share it! Your clicks keep us alive!
Tags
take the cake
Virgie Tovar
HP
thinnest
Hewlett Packard
computer
ad