Even Phone Calls Make Me Anxious — Am I Alone? 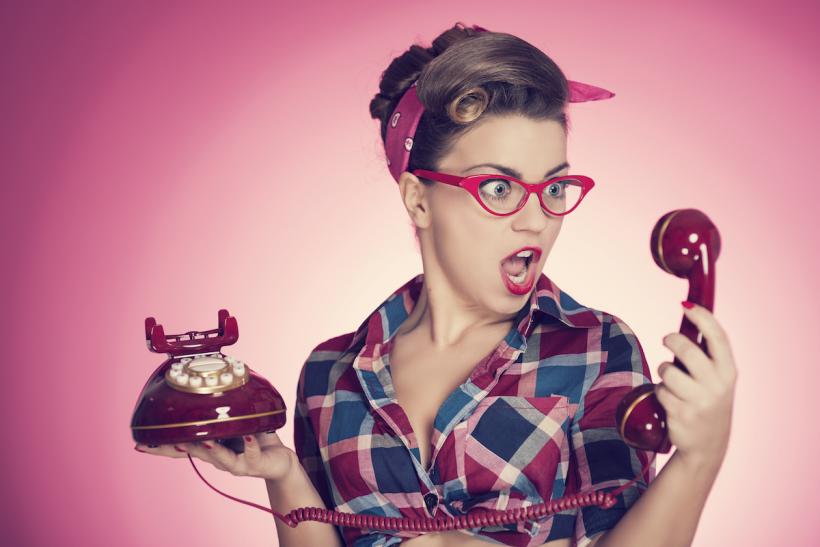 Even Phone Calls Make Me Anxious; Am I Alone?

Two and a half years ago, my family moved to a new home in a new town. We’ve been here long enough to settle in, get to know the area, find the best parks, learn when the grocery store marks down the meat, and where not to go after dark. I get the parks and rec newsletter. Heck, I even joined the Y. We’ve definitely established ourselves as long-term residents of this town.

I haven’t met my neighbors, though.

I'm horrified at the idea of going to a stranger’s house, just walking up and knocking on the door, then being all, “Hey! I don’t know you and you don’t know me, but here I am!!”

I could die. Who does that? Do people actually DO THAT?? I can’t even. On a bad day, I cry even thinking about it. Literally, I cry. And maybe vomit a little, too.

My husband doesn’t get it. He cannot comprehend why the idea of walking up to a house unannounced and unexpected makes me panic. The words anxiety and introvert aren’t even on his radar, not even in his working vocabulary. He thinks that I don’t make phone calls because I’m a procrastinator. He doesn’t understand that talking on the phone is similar to having hot needles shoved under my fingernails. He gets upset when I email people about business matters instead of calling them. “Just call them, Kristi!” Like it’s no big deal. “Just” call them. Easy peasy. Nothing to it.

Things as simple as a missed call from an unknown number or someone knocking on your door put me into straight up fight or flight.

I go through every possible scenario in my head, think about all the things I need to say, all the ways they could respond. And then I look for any possible excuse not to make the call. Hold time is approximately four minutes? Ain’t nobody got time for that. My baby might potentially need to nurse? Well, that obviously takes precedence. Dogs need to be let out? Phone’s gotta wait. There’s a minute possibility I’ll be struck by cosmic death rays as soon as I hit that green button? Duh, put that phone down!.

It sounds weird, I know. Surely I’m exaggerating, right? Nope. At times in my life, it’s been almost debilitating. My first day of class my freshman year in college, I walked around lost on campus for two hours because I absolutely could NOT ask anyone for directions. I didn’t want to look at my map because I didn’t want people to think I was lost. I WAS lost, but I looked like I knew where I was going and that's what matters, right? I missed two classes that day and had blisters on my feet. I was so afraid to take the bus for the first time that I had to hoof it a few miles to get back to my dorm.

To people who don’t have problems with anxiety, it seems bizarre or laughable or just plain crazy. And I guess it kinda is if you look at through rose-colored glasses. But if you think about it with a little bit of empathy, you’ll understand how hard it is.

To have irrational fear of pretty much everything unknown or unexpected? It’s exhausting.

Things as simple as a missed call from an unknown number or someone knocking on your door put me into straight up fight or flight. I really do hide from people who come to my door. Real talk, I have gotten on my hands and knees below a window so they wouldn’t see me. I’ve even hidden in the closet. I know. Whacko.

The thing is, I can’t NOT be this way. I can’t turn it off. I could go get a Xanax prescription and numb it, but I lean heavily toward the addictive side of the spectrum, so I don’t really want to start taking something that I might like a little too much. They say meditation works, but with two young kids, finding even ten minutes to sit is a rarity. There’s also cognitive behavioral therapy. I try it. I’m not consistent with it and I’m not very convincing.

So what can I do? Deal. I just deal with it. I try not to let my kids see me acting like a basket-case and I try not to unload all my fears on my handful of friends (they’re all very patient people, my friends, thankfully, because although I try not to unload on them, I absolutely do). I try not to go off the rails but sometimes I do. I just do the best I can and freak out when it’s unavoidable.

If you like this article, please share it! Your clicks keep us alive!
Tags
anxiety
mental health
fear
social
Friends
moving
phone calls