Parenting Shame: I Hate Playing With My Kids 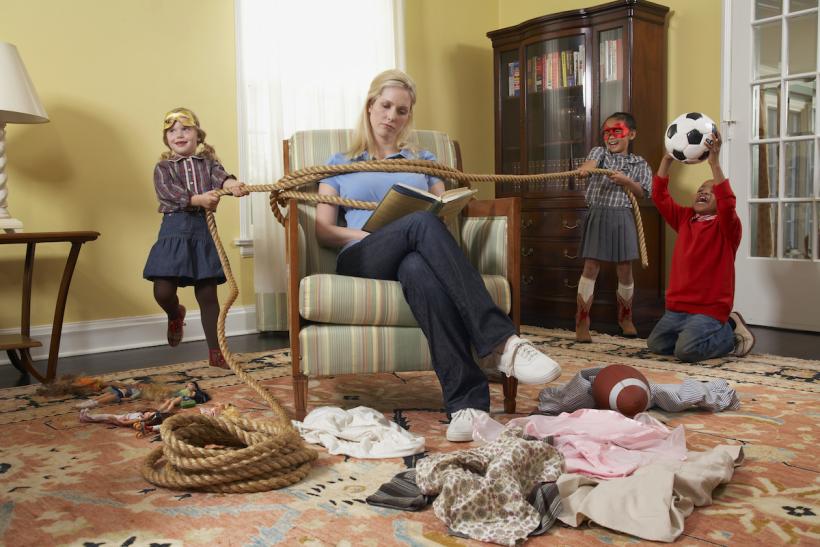 While I love to watch them play TOGETHER. I just don’t really want to join in all that much. (Image: Thinkstock)

I was a GREAT mother with my first child. We did play-dough and made pasta beads. We had a craft table and an ankle-deep homemade ocean, filled with plastic sharks that we fished around in and made small splashy waves together. I went down the slippery-dip behind him at the park and I helped him collect snails from the crooked wall across the road. And I hardly ever looked at my phone when we went for a walk.

All that, you see, equals good mom. With his little brother and sister I haven’t made it to “good mom”status. In fact I’ve been a bleak, dismal, dereliction of motherhood.

I think the thing was that I went too hard, too early. I went all out too quickly and suddenly, by the time my second child was nine-months old and ready to play and my oldest was three-and-a-bit, I was drained of any ability whatsoever to play.

It hit me like a ton of (Lego) bricks.

Playing with kids is boring as F**K.

I know I should be cherishing each and every game of hide-and-seek. I know I should be languishing in delirium when a little hand holds out Buzz and Woody and a half moldy potato from the fridge and tells me that I get to be Mr Potato Head. I know these are moments-I-won’t-get-back. I know it. OK.

But it is still like mental torture, isn’t it?

After having three kids in four years, my life IS toys and play. It’s a knee-high jumble of babies and boxes, of little pieces of cut up cotton buds and impossible to transform robots, and it is that stomach-sinking feeling at the whooshing sound of a box of Legos being upturned in the toy room.

It turns out this pressure to play is unique to this generation of parents – and to our culture. Can you remember your mother down on her knees pushing matchbox cars around the floor with you, or did she leave you to it with the local kids and your brothers and sisters?

It’s nothing about my kids, I tell you; I can’t get enough of them. They are the three most delicious little humans on the planet, it’s just that what they want me to do makes me want to drive nails into my eyeballs.

Don’t get me wrong. There are many, many things I adore doing with my children – reading books, swimming together, walking our dogs. We cook and laugh and talk. They perform concerts and make up plays. I can do scrabble and cards. I can even play soccer or tennis. But ask me to push a swing and I want to screw up my nose and sigh. While I love to watch them play TOGETHER.  I just don’t really want to join in all that much.

Gosh it’s hard to admit, of all the myriad of things I could feel guilty about as a mother, the one that eats away at me is this. I imagine them lying on a psychiatrist’s couch in years to come lamenting the fact their mother preferred to sit on a park bench and chat with the other moms than crawl around in the sandpit. I imagine them Googling me in years to come and reading this post, their spines chilled that I actually didn’t enjoy playing baby hospital, or that I faked it when Teddy broke his leg.

It turns out this pressure to play is unique to this generation of parents – and to our culture. Can you remember your mother down on her knees pushing matchbox cars around the floor with you, or did she leave you to it with the local kids and your brothers and sisters?

Research shows that other cultures, such as the French, don’t indulge their children as much as we do. I read with interest, and savored with relief, an article in The Wall Street Journal by Pamela Druckerman, “Why French Parents are Superior”. She writes of how French mothers do not helicopter or over-parent, of how French children are taught to delay gratification and to play independently: “In a 2004 study on the parenting beliefs of college-educated mothers in the U.S. and France, the American moms said that encouraging one’s child to play alone was of average importance. But the French moms said it was very important.”

And yet parenting social media-style these days almost shames those moms who don’t devote their spare time to child play. A quick peek at Pinterest and your mommy-guilt multiplies one hundred fold.

Am I damaging my kids with my adversity to play? Without certainty, I answer: I hope not.

In the back of my mind, as I write this, I slice out a half-hour section of time today — after homework and before dinner — when I vow to put away my work, ignore the chores, and get down on my hands and knees with my kids. The guilt is that overwhelming.

But as I do, I know that my eyes will be half on the clock, wishing the minutes away, when I can leave them to it, and I can retreat back into the world of parent rather than playmate.

If you like this article, please share it! Your clicks keep us alive!
Tags
parenting
bad moms
moms
maternal guilt
mom guilt

Parenting Shame: I Hate Playing With My Kids
Shauna Anderson