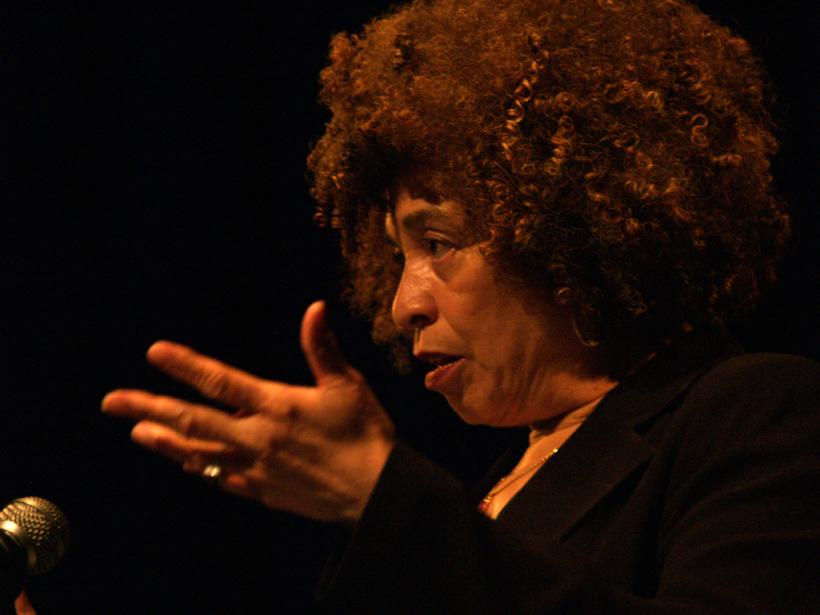 Racism in this country is embedded in the language of many of our laws, and drug laws in particular. Image: Nick Wiebe/Wikipedia.

Millions of people's lives are still controlled in racist and dehumanizing ways after they leave prison.

The United States is locking up and dehumanizing its people at extraordinary rates. Just over 4 percent of the world’s population lives in the U.S., yet we hold captive within our borders a whopping 25 percent of the world’s prisoners. This gives the U.S. the largest prisoner population in the world. And that population is growing, though not for any noble reason, like “crime is on the rise” (au contraire). It’s growing because of the same sleaze that’s behind most of our country’s problems: giant corporations are incentivizing, and profiting from the expansion of the prisons industry.

Over that gaping wound that is mass incarceration, we’re pouring a noxious vinegar called racism, which is distilled from the most putrid seeds that sprouted our nation: slavery. Our bloated prisons are disproportionately full of poor men and women of color, and it’s no accident. Nor is it a coincidence that as smartphones have turned us all into vigilante documentarians, able to capture injustice on our streets, some cops are caught murdering black men, and seldom forced to answer for their crimes.

These issues are all linked. They are part of a perpetual motion set off a couple hundred years ago with this nation’s shameful beginnings on the backs of stolen and imported humans. This is the crux of a powerful argument that activist, author and scholar Angela Davis threw down in a recent public phone conversation about the prison-industrial complex with asha bandele of the Drug Policy Alliance.

“It would seem to me that the recent emergence of the Black Lives Matter movement causes us to reflect on the connection between our lives in the second decade of the 21st century and the history of slavery, and particularly the failure to entirely abolish the consequences of slavery. We are still living with those consequences today. I like to think of racism also as a way of acknowledging the fact that we continue to be haunted by the institutions connected with slavery,” Davis said.

Davis and bandele — who prefers to spell her name in lower case — took the conversation past mass incarceration into a compelling overview of what the residual label of criminal does to a person, as well as the community, and society at large. What happens, they asked, when your community is targeted and generationally oppressed; when you are raised to fear the police because you’ve seen whose blood it is they’re spilling; when your father and uncle and siblings and cousins are all labeled criminals?

“It seems to me that if we seriously want to move from mass incarceration, also from mass criminalization, we'll have to think about what it might mean to transform some of the other major institutions in our society.”

bandele opened the conversation on that note, which she said DPA has been grappling with for decades.

"While it's certainly true that there are 2.2 million people living in the worst conditions in America's prisons and jails, it's also true that more than twice that number are monitored, their movements measured and controlled, their citizenry redacted in ways that diminish their humanity,” bandele said during her opening comments. “It's also painfully true that [mass incarceration proponents'] defining of particularly, although not exclusively, young black and brown men as criminals, has created what I think is an open hunting season on young black and brown men.”

Davis pointed out that schools, particularly those in poor communities of color, “reflect the impact of the prisonization of our society.”

Davis continued, “It seems to me that if we seriously want to move from mass incarceration, also from mass criminalization, we'll have to think about what it might mean to transform some of the other major institutions in our society."

Davis said that while the official retelling of America’s history of incarceration often begins with the creation of the penitentiary in Auburn, New York, and Philadelphia, Pennsylvania, our punishment systems truly began with slavery. She explained how slavery systems have played a key role in the development of systems of punishment.

"As a matter of fact, in the aftermath of slavery," Davis said, "when one sees the convict lease system develop, when one sees the transformation of some of the huge slave plantations, into places where prisoners work, where convicts work, and of course Angola and others remain as witness to that connection between punishment and slavery and the mass incarceration in the 21st century,” she said.

Racism in this country is embedded in the language of many of our laws, and drug laws in particular, “as Drug Policy Alliance has made us aware,” Davis said. She noted those laws “have been a large driver in the contemporary increase in the numbers of people in prison. But the institution itself is grounded in slavery.”

To Davis, it has long been clear that the issues society faces have deep roots. It appears that today, with more widespread awareness and education, public grasp of the complexities of the prison-industrial complex is beginning to catch up with reality.

Often the notions that delineate violent from nonviolent are constructed.

bandele reflected on the way Democrats and Republicans have both switched gears, from once calling for mass incarceration to now seeking ways to reduce it via reforms (largely due to budgetary pressures). She asked Davis to share her concerns about the way mass incarceration has taken center stage within the mainstream political discourse.

Davis responded with, “It’s about time.” She said it did not surprise her that the right may have figured out a way to incorporate the issue into its call for smaller government, but its solutions are all “carceral.”

“Their solutions are more ways to control and surveil people without necessarily keeping them within prison institutions. That is not a solution, that is a part of the problem, and as a matter of fact, more electronic bracelets, more probation, more parole, all of that adds up to creating... a society that is even more determined by the carceral.”

The consensus of the talk was that, when talking about criminalization, incarceration “doesn’t take it far enough.” Along the same vein, bandele noted, when talking about drug crimes, the dichotomy of violent vs. nonviolent is also a simplification.

“[We’ve] developed this sense of compassion for people who use drugs over the last several years, but we have little or no compassion for people who sell drugs,” bandele said. “That was made evident recently by Bill Clinton in his rant, and I wonder how we can begin to disrupt some of these dichotomies we have.... We care about the drug user, but not the drug seller. We care about the nonviolent prisoner, but not the violent prisoner. How do we begin to tear down these walls? Or should we?”

Davis’ said often the notions that delineate violent from nonviolent are constructed.

“What counts as violence?” she asked. “As a matter of fact, law enforcement people have an enormous amount of discretion in terms of charging someone with a so-called violent or nonviolent offense. Say, the difference between robbery and shoplifting, or whatever.”

She called the distinction between drug user and drug seller “totally artificial,” using the example of women who are charged disproportionately with drug-dealing charges over men.

“[I]t's women who are most affected by the drug laws. As a matter of fact, proportionately, more women are in prison for drug offenses, and this is true not only in the U.S., all over the world,” she said. “It often has to do with the fact that often male prisoners — a male defendant escapes imprisonment, or they have their sentences reduced, because they're able to enter plea-bargaining deals and they're able to provide information to the prosecution. And women are not. So we have a disproportionate number of women going to prison on drug selling charges, and often times it's only because of relationships with men. Often times it's not even because they have been actively involved in the process of drug selling.”

“There are issues that we discover by looking very closely at the predicament of women in prison as we understand the relationship between intimate violence, which so many women have experienced, and institutional violence or state violence.”

Midway into their conversation, bandele asked Davis a question that is rarely asked, “I wonder if you can help us think through that particular harm. What does it mean that we have just exponentially removed our mothers and our grandmothers and our sisters from our communities? We've talked, and we should continue to talk about what it's meant that we've removed our fathers and our brothers, but what does it mean that we've lost our mothers in this way? What harm does that cause, especially black and brown communities?”

Davis called this a major trend, “regardless of the numbers.”

“However, there are issues that we discover by looking very closely at the predicament of women in prison as we understand the relationship between intimate violence, which so many women have experienced, and institutional violence or state violence,” she said. “And issues that we've become aware of over the last period, especially since the campaign around CeCe McDonald in Minnesota, has been the question of trans women prisoners.”

The talk with Davis was the seventh in a series of public conversations DPA has hosted, which began in 2014 with Michelle Alexander, law professor and author of The New Jim Crow; Mass Incarceration in the Age of Colorblindness. DPA launched the talks as a way to broadcast some of the organization’s most urgent internal conversations to the public.

“We've wondered privately and aloud, what if we do the urgent and important work of emptying out the prisons, but people's lives are still controlled in myriad and dehumanizing ways?” bandele said.

The issue of mass criminalization has been paramount, bandele said, especially as both major U.S. political parties begin to feel the pressure to reduce the prison population.

Listen to the full talk.

Angela Davis And asha bandele: Getting People Out Of Prison Is Just The Start To Solving America's Incarceration Crisis
April M. Short