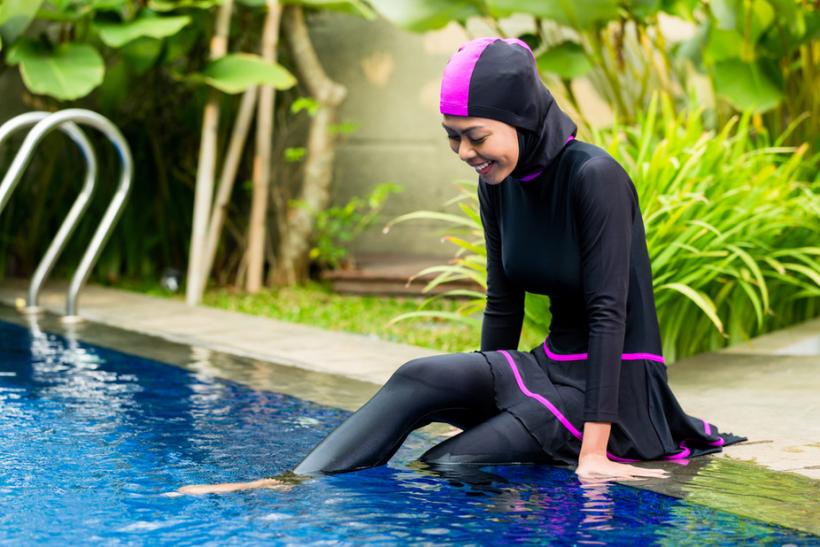 The recent series of burkini bans in resorts across France was met with sensationalist global headlines about protecting national security and women’s lives. The interdiction does not protect either of these. Instead, it reinforces tired stereotypes about Muslim women.

Mayor of Cannes David Linsard was the first to introduce restrictions on the burkini, a full body garment worn predominantly by Muslim beach-goers who wish to preserve their modesty. Women wearing the swimwear in the popular Riviera city have now started to receive fines of €38 (£28). Then a seaside resort on the French island of Corsica became yet another to ban the burkini. The town’s mayor Ange-Pierre Vivon commented on the ban, claiming that “Islamist fundamentalists have no business” on the Mediterranean island. The announcement in Corsica followed a brawl — reportedly sparked by people taking pictures of women wearing burkinis.

All this comes five years after the total niqab ban was introduced across France, and more than a decade after conspicuous religious symbols, including Islamic headscarves, were banned from French public schools.

Rehashing well-rehearsed arguments from the previous anti-veiling campaigns, supporters of the burkini ban have backed the decision by calling the garment a symbol of threatening fundamentalist sentiment. As such, they denounced the burkini as harmful to the French idea of laïcité (secularism), national security and gender equality.

“I simply forbid a uniform that is the symbol of Islamic extremism,” said Lisnard. But comparing burkini-wearers to the adherents of menacing political organisations has little basis in reality.

Worn voluntarily and sold by popular high street and haute couture brands alike, burkinis have become a widespread sartorial choice for many practicing Muslim women in France and beyond. Being praised for blocking sun-rays and the male gaze, the attire is often also embraced by non-Muslim women, most notably also by TV chef Nigella Lawson.

By incorrectly labelling the burkini as a terrorist attire, Lisnard and the supporters of the ban have resorted to a tiresome single story about Islam and its followers. Their comments cling to partial and often dangerously warped fragments of Islam-inspired atrocities. They generalise them and attribute them to the entire Muslim population, and cast all Muslims as a potentially dangerous “other”, with no place in Western society.

This is politically convenient. It creates an image of national enemies and justifies moral crusades against Muslims at home and abroad. From inserting a false notion of protecting public order, to rationalising the bombing of distant nations, the demonisation of Muslims can provide an instant gain of much-needed votes in times of political crisis.

The myth of saving Muslim women

The advocates of the burkini ban not only allege that all wearers are adherents of radical Islamist ideas. They also suppose that burkini-clad women are necessarily the victims of these political systems, which force them into complying with their patriarchal laws.

Valérie Boyer, a member of the National Assembly of France, who was among those who welcomed the ban, proclaimed the burkini a “gender prison”. The socialist government’s minister for women’s rights, Laurence Rossignol, echoed these sentiments by claiming that the burkini “is the beach version of the burqa and it has the same logic: hide women’s bodies in order to better control them”.

Both politicians enunciate a highly patronising notion: the concept of Muslim women needing to be saved. Stemming from colonial legacies, the idea of liberating veiled women by removing their veils has been deployed numerous times. From the French colonisation of Algeria to the NATO invasion of Afghanistan, racially charged images of veiled women have constituted a vital component of Western war propaganda.

Amid the burkini controversies, the media in France and across Europe has published images from the liberated Syrian town of Manjib. The photographs depict women celebrating the departure of Islamic State (IS) by burning their burqas in public. Many media outlets were quick to make comparisons between burned veils and the burkini ban.

Whether talking about mandatory face-veils in war-torn Syria, or voluntary burkinis in French resorts, the media’s language about Muslim women appears strikingly similar. Muslim women are portrayed as universally oppressed and in need of intervention from Western saviours.

This type of rhetoric gives little space for acknowledging that women not only choose to wear certain types of attire, but might also have a different definition of freedom. While for some it might be about exposing their bodies and not being ashamed about it, for others freedom comes in the form of protecting modesty.

A eurocentric view of the veil as a universal symbol of oppression misses the opportunity to acknowledge the diversity of female and feminist agency that comes in various shapes and forms. Burkinis can be part of that.

If you like this article, please share it! Your clicks keep us alive!
Tags
the conversation
burkini
France
Islamophobia
orientalism
patriarchy
misogyny
secularism
religion